There was a boat on the patio.  It had been there for so long that a nest of insects of some sort made a home there.  They really didn't seem to bother too many people, although if you were sitting on said patio with a beverage, they could buzz you to see whether they'd like a sip or two.  Sometimes children screamed about them, but they were mainly harmless.

The boat was removed.  The insects were displaced.  Poor things, it couldn't have been fun to have their home destroyed, although I can't bring myself to feel much sympathy since I am definitely NOT an insect fan.

One day, sitting on the patio, DS observed insects crawling around and entering the overhang of the sliding glass patio doors. 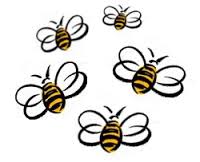 Time to get the spray...  DH went into action. 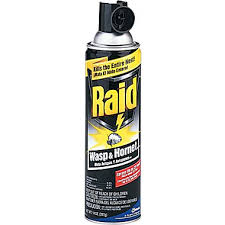 How do you tell a wasp from a hornet from a bee?  There seem to be many different types of flying, buzzing, stinging insects, and who wants to get close enough to tell the difference??  Not moi, that's for certain. 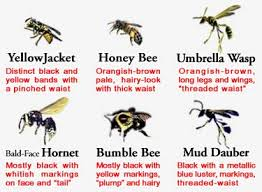 Or the 'kinder, gentler, Canadian' version: 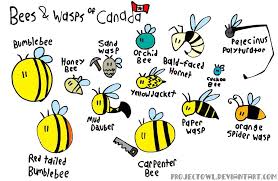 I already told you the story about Miss A got stung. That was NOT a good thing.  And it kind of got my dander up.  Sting me, OK, I can take it.  Sting my grandchildren??  Not so much.

So the buzzing, stinging things are now displaced from the back yard.  And just where did they go??  Around to the FRONT yard!

One evening when I got home from work there was my son-in-law in my front yard armed with a FLY SWATTER... banging away at the insect population.  <sigh>  DH went out to assist.  More spraying ensued. 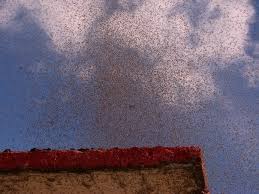 It wasn't exactly Armageddon but you get the idea.  I said "you guys had better be careful or someone else is going to get stung."
I also suggested contacting a real live pest control company.  After all, how long will it take two guys to swat or spray all the bees or whatever they are that are now living in the front porch of our house??  Really, people, just get it over and done with, right??
One night a bit later in the week DH reported on the progress.  "I got stung today.  IT HURTS!"
Duh.
I refrained from saying I told you so.  Well, I refrained from saying it OUT LOUD.
This week the "Official Professional Pest Control Company" came and sprayed.
It appears that the buzzing, stinging things are pretty much gone.
﻿

So the Grands all had their first day of school today... DH was going to go out for coffee with the neighbor guys and DD was home from work to see the kids off.

I left before the crying started.  Well, only one person was crying, and maybe the dog.

DD said to DH, "Dad, stay away from McDonald's today.  They're having Coffee and Kleenex day for all the parents and grandparents who are sad that school is starting."

I said to DD, "And where is the party for the parents and grandparents who are doing the happy dance in the driveway when the bus departs??"

Almost Twilight is finished!!  My friend Suzi and I were comparing lists of unfinished projects recently.  I'm happy to say I can cross this one off as done!

The binding is on, and I did it completely by machine.  Usually I would sew it on the back and hand stitch it on the front, but for expediency this time I did it all by machine.  I sewed it to the back as normal, trimmed down the seam allowance and with my walking foot stitched it to the front of the quilt, with thread as close to matching as I could get.

Or I could find someone in the family with a full sized bed and gift it to them.

It was my first experience quilting with batiks.  I really love the colors and Suzi B did a wonderful job on the quilting.   So a big finish.  I think this was the largest of my UFOs.

I also quilted and bound the charity quilt for my local guild, but no photos, it's just so -- so -- ugh...

The back is pretty though!  Hope someone loves it. 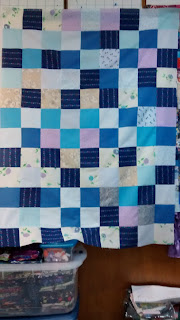