Do you love the old song "Mona Lisa"?  Mona Lisa was sung by Nat King Cole.  Oh, my, that man had a smooth voice.

Mona Lisa, Mona Lisa, men have named you
You're so like the lady with the mystic smile
Is it only 'cause you're lonely they have blamed you?
For that Mona Lisa strangeness in your smile?

Do you smile to tempt a lover, Mona Lisa?
Or is this your way to hide a broken heart?
Many dreams have been brought to your doorstep
They just lie there and they die there
Are you warm, are you real, Mona Lisa?
Or just a cold and lonely lovely work of art?

My grandchildren are all wonderful, and of course the most beautiful children that ever lived!  (Aren't yours too?)

But when I get photos of the eldest, she always seems to have this half-smile, which so reminds me of Mona Lisa.  In fact, I'm thinking I'll give her a new nickname:  Mona.

Can you tell me what old movie THAT song was in??  Hint, Bing Crosby and Danny Kaye.

She's either making a goofy face, or doing a half smile.  Maybe she just doesn't like having her picture taken!

But I prefer to think of her as keeping a tiny little secret from everyone.

I have a box in my sewing room of 'works in progress'... WIP for short.  Kind of a nicer way of saying 'UFO'... or unfinished objects.

Every once in a while I drag something out of there and try to get it done, so I can make room for more WIPs.  Occasionally this even works!

So last Sunday afternoon, I decided to 'git 'er done', to quote Larry the Cable Guy.
The first one is tomato fabric that I just loved when I bought it (yes, I love red!).   X number of years ago I was making aprons as gifts.  I planned on making a barbecue apron for my son-in-law.  Turns out he doesn't like tomatoes, even on an apron!  Guess I should have gotten the BBQ ribs fabric.  He took one that had onions on it instead, so tomatoes went to the bottom of the pile.

The other one is a piece with ducks.  I got it off the free table at one of those ugly fabric exchanges.  I don't know what I thought I would do with it, but I have outdoorsmen in my life so I heard it calling me.  Duck call.  OK, never mind.


I didn't have a pattern, but I had worn enough aprons in my time to know what they should cover up, and I just took scissors to fabric and cut out appropriate shapes.  I later found this lovely pattern from Mary Mulari for a reversible apron that would have been neater and made a heavier apron, but looks very similar to my end product.

I made several aprons, but two got as far as having the seams on the strap pieces sewn, then I put the project aside.  I didn't even turn the straps right side out at the time.  When I moved (was it into or out of the condo??) the pieces went into a zipper seal plastic bag.  This became part of my WIP box. 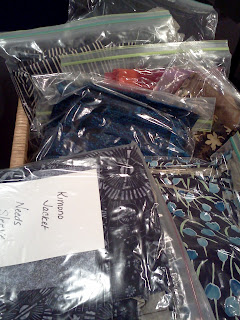 It's so far down you can't even see it!

Sunday was THE day.  I pulled out the bag, turned on the machine, and went to work.  In under an hour I had two aprons done.  I sewed the pocket on straight on one, then after looking at Mary's pattern I slanted the other, so you can slip your hand in to grab a key or a napkin or any other small thing easily. 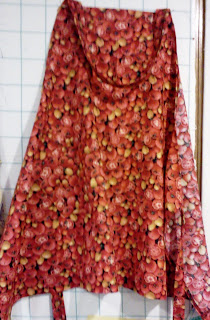 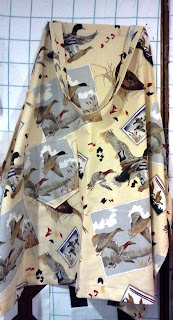 Done!!  Yay!!  So do you think this counts as one finish or two?

Even Long Time Sewists Get the Blues...

I am laughing and crying at the same time today.  I knew better, but did I listen to myself??

Nooooooo... of course not!

Always.  Prewash. Fabric. Before. You. Sew.

I have been quilting for such a long spell, and getting away with not prewashing, that I got careless.  Sloppy.  Lazy.  Stupid.

Having been making garments for more years than I want to admit sometimes, I know very well that what goes into the washing machine is not always what comes out.  If you want to put a garment in the washer and dryer after you wear it, you need to know how the fabric will react.  Some stuff (like batik and polyester) comes out looking the same.  Some stuff (wool, 100% cotton, rayon) does not.

I took out a piece of gorgeous fushia knit the other day.  OK, granted, I could have done a fiber test, burned a piece to check the results, or just serged off the ends and washed the danged thing, but it was late in the afternoon and I wanted to actually FINISH something.

I left the top I made folded nicely on the quilt rack that's in my downstairs hall because I had to stop in the downstairs bathroom.  When I came out, I forgot to pick it up.  I should have put it on a hanger, or remembered where it was.  I should have gone down to grab it the next day when I wanted to wear it!  Shoulda, woulda, coulda.  I know.

DH grabbed the laundry on Thursday to take it in the basement.  He must have thought I intended that top to go all the way downstairs instead of all the way upstairs.

The picture will speak for itself.