A few months ago I wrote the saga of the blue chair... DH has had a blue reclining chair for about 12 years and it needed replacing.  Of course that was only MY opinion, not HIS! 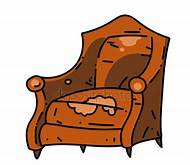 He bought that chair from the Lazy Boy gallery because it was supposed to be so much sturdier than the previous blue chair, which had come from just an ordinary furniture store.

He is not a large man, average height and average to low on the weight scale... so one would think he would walk and sit like any average person.  However, he stomps when he walks and when he sits down, furniture groans.  I don't know what it is about sitting down, but he throws himself back into his chair like a person who weighs three times as much as he does!

Therefore, the chairs do not last.  Two generations of blue chairs ago, we had identical recliners.  His broke down, probably within five or six years of the purchase; both the seat springs and the lever to open it went south in a big hurry.  My chair was still in great condition.  We got rid of his and he took over mine, and I moved myself to sitting on the sofa.

This last blue chair lasted longer but gosh, don't you think a chair would last longer than 10 years, especially an expensive chair??  I say 10 years because that's when he started needing a pillow on the seat to cushion his tush.

And don't tell me about LB guarantees because you have to keep the receipts, which he didn't.  So I wanted to get him a new chair. 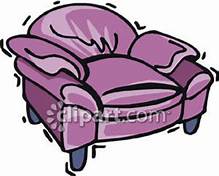 Him:  What do you want for your birthday?
Me:  For you to get a new chair.
Him:  My chair is fine.

Then last Monday he said "How'd you like to go help me pick out a chair today?"

Stunned silence.  Finally I said "Nope, you just go and pick out whatever you want."  He said "How will I know you'll like it?"  I said "Text me a picture."

That required teaching him how to attach a photo to a text message.  We got through that without threat of divorce.

He left the house for the furniture store.  About half an hour later, he texted me this photo: 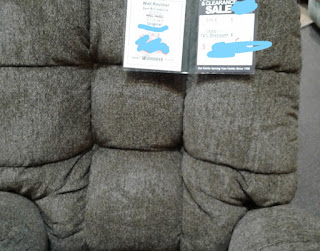 He's sitting in it now.  It's actually a very nice chair.  At least it isn't blue.

Posted by Sewing Sue at 2:29 PM No comments: