Today I had one of the most enjoyable days of my life, and certainly one of the best days of my sewing life!  I was part of the live audience at the taping of Nancy Zieman's 30th anniversary on public television.  I cannot begin to tell you how special that was.

I took a day off work and purchased one of a limited number of tickets to attend a taping of one of my favorite shows on TV, Sewing With Nancy.  I think I started watching SWN about halfway through the first year she was on public TV, or maybe the second season.  I taped it the old fashioned way, on VHS tapes.  I watched them over and over.  Every year at Sewing Weekend I would buy the full season of booklets that Nancy wrote to accompany her shows.  She even autographed a few of them.

So how could I not attend the event marking three decades on public television??

The drive to Madison where she tapes was uneventful.  The WPT volunteers were there to help us find the studio.  We walked past carpenter shops and prop rooms into a studio with black walls and lots of cameras and ceiling lights. 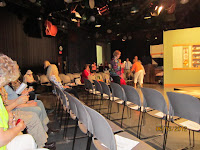 I was early enough to get a good seat.  I choose to sit on the right side in an angle row where no one was sitting in front of me, because it usually happens that the tallest person in the place will sit in front of me and block the view.  Think dance recitals where I don't get to see the dancers in the center...

There were desserts and beverages, and a wonderful WPT volunteer whose name escapes me but I know you've seen her during pledge week gave us the housekeeping rules.  We were able to take photos before and after but not during taping.

Nancy had her family there.  I recognized her husband from past Sewing Weekends where he once offered to rent me a trailer to help take my loot home, and her oldest son who once shuffled a big box to my car for me.

Taping was done in two sections for the two part series.  The show will air in the fall schedule, but you might see it sooner (during Pledge prgramming) if you get Wisconsin Public Television on your cable (as opposed to Milwaukee Public Television, which is a different station).

There were a couple of retakes of a few things, but things went very smoothly.  Nancy has a great crew and she's a total professional!  She had guests  including Mary Mulari (her most frequent guest at 46 shows so far), Gail Brown, who she called most versatile, Eileen Roche, Natalie Sewell and her two 'right hand women' Donna and Pat.  These ladies are some of my favorite sewing professionals and it was a joy to here them reminisce about their years of working with Nancy.  They are genuinely nice people in addition to being such good teachers.

A staff member with a video camera was filming the audience, making a video for Nancy, and I waved and said hello.   I should have said congratulations, but I was kind of tongue tied!  Duh!  I used to be better at thinking on my feet!

There were great door prizes.  Gosh, you can't even believe it, but someone won a TEN THOUSAND DOLLAR BABY LOCK SEWING MACHINE!!  <sigh> it was not me.  I also did not win the Amazing Designs 25 CD design pack, or the Madeira Thread Chest (which I've been lusting after for so long) or the Oliso Iron or the Clover Notions gift packet. 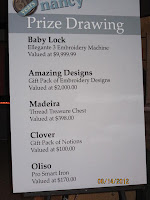 However, I am the proud owner of a lovely Baby Lock coffee mug, some Madeira thread and a Mary Mulari pattern that came in the goodie bag we all received on our way out.  And I had the privilege of attending an awesome event with one of my sewing heroes.  Did you know that Nancy was the first person inducted into the American Sewing Guild Hall of Fame?  Yes, she has done THAT much for the home sewing industry and sewists all over America!!

There were lots of audience shots, so hopefully I'll make it to public TV...  and not be left on the cutting room floor.  When you watch in November, look for me.  This is what I was wearing:

It's a Sewing Workshop pattern, made with Japanese cotton I bought at an ASG conference a few years ago.  I sewed it faster and more efficiently with techniques I learned by watching Nancy.

Thanks Nancy and WPT for 30 great years, and I look forward to many more to come.

If you're not a supporter of Public TV, IMHO you should think seriously about becoming one!  And by all means watch.  You're sure to find something you will enjoy.

We don't have the normal kind of princesses in our family.  No looking for the pea under the mattress for us!  We're kind of a rowdy bunch, girls who work and fix things and help their husbands with projects or do their own projects and aren't afraid to get their hands dirty sometimes.  We are womanly women, make no mistake about that!  We like to get dressed up and wear cool shoes and all that.  We can do anything we want to do.  We are woman, hear us roar!!

Some of my girls like animals more than dolls and dishes.  I like to think they may be budding veterinarians or something along that line.  I think one may be a future archaeologist or paleontologist.

﻿ Our county zoo has an awesome exhibit of mechanical dinosaurs that make lots of noise and movement, set in a corner where the vegetation has been made to look Jurassic.  The vignettes are very lifelike, and if these dinos aren't truly life sized, they're pretty darned big!

We went to see the dinosaurs last Sunday.  It was very hot and for me the walk was torture.  But to see the enjoyment on the faces of these three sisters was worth the discomfort.  I drank two bottles of water on the trip up the hill.  The girls put me to shame on the walk, or should I say walk/run?  They ran, I dragged my sorry butt as fast as I could without coming out of the flip-flops.

﻿ I took the first picture at the beginning of the exhibit.  Nicely posed, sitting properly on the small fiberglass dino.  After a second, more candid shot (self-posed) we toured more of the exhibit.
There was a nest of some sort of babies that made a lot of noise, and the mama posed behind it made lots of threatening noises in response to their squeals.  It was pretty authentic-looking!

But no one was afraid, at least not in our party!  The smallest of us was possibly the most intrepid.  She wanted to touch all of them, but the exhibit had enough barriers to keep her on our side.  The dinos move their heads and limbs but they don't leave their spots, being anchored pretty well to the ground.