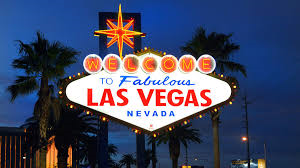 For people who travel for pleasure I envy you a bit, but it's nothing like that for business.

I had to be up early for the 3 1/2 hour flight and due to the time change it seemed like extra early to me.  I arrived there at noon Pacific time, and it was already in the high 80s.  I am a Midwestern Girl, and we don't experience that much heat in early June.  When I left the Milwaukee airport, it was 66 degrees.
The days in Las Vegas were packed with work activities, Monday was about 16 hours long from airport in the morning to bedtime at 11 p.m. 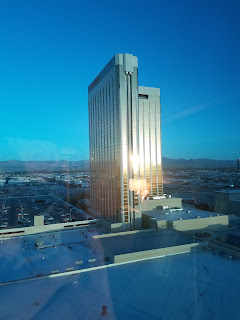 Our convention was at the Mandalay Bay Conference Center.  The building is VERY LARGE.  It was a 10 minute walk from my elevator to the meeting room.  Of course it had to go through the casino!  They still allow people to smoke in there, but they must have really good fans because the air was not blue like it used to be, with clouds of smoke hanging over everything.  At least you could breathe, even if you could still smell it.

Our client event was at the Madame Tussaud Wax Museum.  We were dropped via Uber at the Venetian Hotel taxi stand because in Vegas there is no parking on the Strip.  Who knew?  So in our dress clothes (mostly black) we four ladies (in heels) walked across a pedestrian bridge and waited on the corner for a green light to cross, and MELTED! 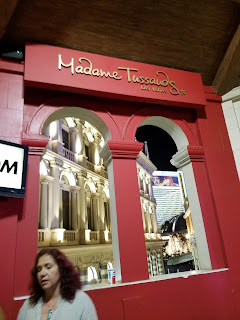 Once inside, there was air conditioning (duh, wax!).  The manager wanted to put our registration table at the entrance, but that was outside... and melting, people!  I said I'd prefer to be inside, and thankfully that was arranged.

I spent the evening sitting across from a white curtain that cordoned off our area from the general public, and next to the statue (is that what you call them?) of Brad Pitt.  We put a name tag on him and invited him to the event.  We also snapped a pic with the boss to prove it.


There were lots of very recognizable people there (in wax form) and some who looked vaguely familiar but maybe it's just me... I don't follow the Kardashians or whoever is the flavor of the minute like some people.  And being in charge of the registration table did not give me a lot of time to view the attraction.  I did see a homeboy from Milwaukee...


At the hotel we decided that a good place to connect to go to the various locations was the statue of Michael Jackson in the lobby.  "Meeting at Michael" became the code.  I'm not sure it really looks like him, at least you knew what people meant by it.  I will say he is huge!﻿ 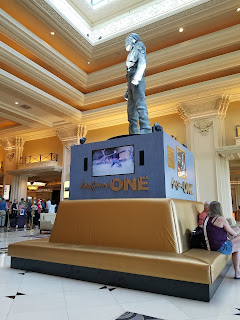 On the way home I was part of the big blackout at McCarran Airport.  Power went out about 10 minutes after I sat down in the boarding area.  As I was flying Southwest and was in the last boarding group I figured what did it matter anyway.  It was going to be 107 degrees in Vegas, and the airport did get a bit stuffy, but what can you do in a case like that?  Keeping your cool takes on a double meaning.
I was reading when a nice man sat down next to me to try to use the outlet to charge his phone.  No dice, only select things are powered by the generators that had come on.  He was anxious because his boarding pass was on his phone and his phone was at 4% power.  Ooops!
An hour or so later, the power came back on and he was able to charge his phone to 10% and get in line.  Lucky guy, he was in group A, so he got on before it went dead again.  When my turn came, only middle seats were available, which I knew would happen.  I was fortunate though, I got a seat in Row 3.  Right next to the phone charger guy!  We had a nice chat while waiting to take off.
Arriving at home I discovered that it was hot here too, but much more humid.  Fortunately the car is air conditioned.  Hubby and I went for lunch and when I came home I unpacked, put on comfortable clothes and crashed on the couch.
As I get older I find that recovering from travel takes longer too.  Even the vacation trips take their toll.  Changing time zones got me worn out.  The first day was so long, I got to bed at 11 p.m. Pacific Time but my brain was still on Central Time so that meant it was really 1 a.m. to the old bones!
I am so happy not to be traveling anywhere that I cannot get to by car for the foreseeable future!
No more 'day job' for me, today was my last day.  What do they call that emotion, bittersweet?  Glad to leave the job, sorry to have to leave the people I so enjoyed working with, my work family if you will.  But WOOT WOOT!! I'm officially a retired person as of about noon today!
Rock on...

Posted by Sewing Sue at 3:39 PM No comments: