This weekend, while my DH was busy tearing out the carpeting in our upstairs, I worked on some projects that had been nagging me for completion...

I fixed a small hole in the back of a pair of DH's blue jeans.  How exactly does one tear through the place between the center back seam and the back pocket?  And it wasn't so much a tear as it was a worn out spot, about the size of a dime, with some sort edges around it.  I think it was the process of making the fabric look aged that did it.  So I cut a small piece off an old pair that I've been using for patches and stuff, and pinned it to the inside of the jeans.  The patch was much lighter in color than the jeans, so I figured I'd sew it to the inside and it would be less conspicuous.  You're going to be able to tell they were mended either way, but the thread sewn on the outside was closer in color than the patch.

So I zigzagged around the edges to secure it, then I sewed back and forth across the length of the patch to make sure it stayed secure.  I used the pinking shears to cut the patch, so I'm sure it won't fray too much but I sewed the daylights out of it just in case it decided to wiggle itself loose!  I'm sure it's a strong patch, and if anything the jeans will spring another leak (hole) in some other, non-reinforced area!

Then I made a tent bag.  SIL brought me a 'present' a couple of weeks ago.  "Can you fix this?" he always asks. 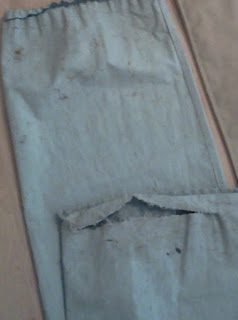 Sadly, sometimes the answer has to be no, like the times when HIS jeans tear a quarter inch away from one of the flat felled seams and there's nothing to sew a patch to...  but in this case, the tent bag was so torn and thin, I couldn't save it.

I found some twill in my stash.  I must have planned to make some boy pants or something, this stuff was S.T.I.F.F.!!  So I cut two layers about the size of the tent bag, and did a big, double flat felled seam on the side and the bottom.  I made the outside layer  about a half inch shorter than the inner layer, and folded both layers over on the outside at the top.  The longer, under layer got folded over again about a half inch, to make a clean finish on the outside.  I stole the drawstring from the old bag, inserted it in the casing, and viola!!  New tent bag! 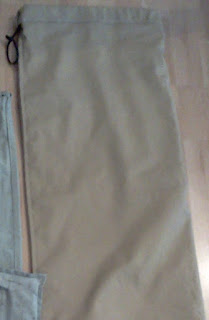 I know, totally not sexy, but it will do the job.  Now if he gets work in Iowa (he's an iron worker and travels where they're building) he can stay in his tent and not have to pay for a motel room.  It's not an impressive project, but he really liked it! 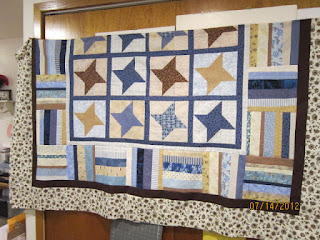 Next I sewed the three outer borders to my DD's quilt.  This project has been on the back burner for a while.  It's folded in half on my design wall because it's queen sized.  I think it's big enough for a drop on either side of the bed and at the end, but I have to check the measurements.  I might have to put on one more border.  Then it can go off to the quilt shop for finishing.  There's no way I'm machine quilting anything this big!! 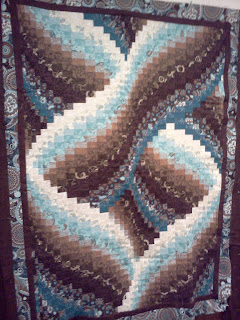 Last but not least, I put the final border on the Bargello from Hell wall hanging.  This photo is before the final 4 inch brown border was sewn on all four sides.  Now I just have to piece a back, because it is wider than the backing fabric I bought.  I have some strip sets left from the interior pattern, so I'll probably piece those together for a large center block and put the brown and teal polka dot fabric around the edges.  I'm going to try to quilt this on my home machine.  Maybe...

My final finish this week was Jennifer Chiaverini's book, The Union Quilters.  It was a good story, about how the women left at home during the civil war supported themselves and each other with and through their quilting.  I know there's another of her books that refers to this time period.  I don't recall which one it is, but some of the plot lines are echoed in this book.  It's a good stand alone story, but I think you could benefit some by having read the other book.

Hope you're staying cool in the hot weather.  We got about a quarter inch of rain on Saturday, not enough to save the grass or help the corn.  I guess if I want to see green, I'll have to work on the Phone Guy's Wife quilt blocks!

Posted by Sewing Sue at 7:51 PM No comments: