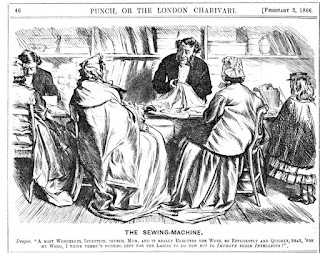 Many people think the inventor of the sewing machine was Isaac Singer.  Not true!  His name is probably the most easily associated with the sewing machine, mostly because he was an opportunistic scoundrel and took advantage wherever he could, although he is responsible for a lot of improvements in early machines.

The first candidate for inventor of the sewing machine was a German mechanic working in London.  His name was Charles Weisenthal purportedly in 1755.  it was meant to do embroidery but didn't go too far.
﻿﻿

Somewhere in this time frame someone decided to try to set up a factory with machines to sew in Paris.  The Tailors Union discovered it and decided it was going to put them out of business, so they pushed the machines out of high windows to smash them and burned the factory down.

Next came an English cabinetmaker named Thomas Saint but his patent was registered  in 1790 using multiple categories as was the practice at the time, and thus it was filed under the category of GLUE, bookbinding for the use of.

William Newton Wilson discovered this about a hundred years later while doing research.  He built a replica from the patent drawings, and it worked.  He took it to the 1876 Centennial Exhibition in Philadelphia where he tripped over a display by Elias Howe, claiming that HE invented the sewing machine in 1846.  Surprise, surprise, surprise!

Howe had invented a machine and patented it.  He may have been a good inventor but not funded sufficiently, and there is doubt as to whether his machine actually worked.  He went to England and you can google him or go to ismacs.net and read articles to find out his sad story.    He eventually came back to the US, found out that people were manufacturing a 'sewing machine' and proceeded to sue everyone and their uncles for patent infringement, and winning.

Enter Singer.  He chose to fight Howe in court about the prior use of the technology that Howe patented, and through inefficiencies and errors Howe prevailed through many years.  He is even sighted by the Smithsonian Institute as The Inventor of the Sewing Machine.

What Singer did very well was improve the technology, and sell machines.  He is credited with allowing free home trials, and inventing the time payment system. 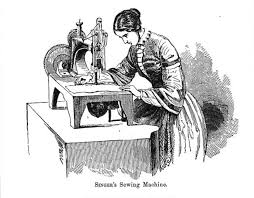 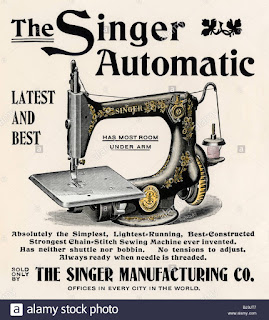 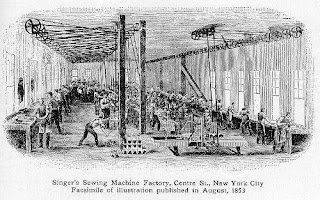 I have my husband's grandmother's Singer treadle machine, purchased about 1929 for somewhere around $49 if the paper tag I found inside one of the drawers is to be believed.  It still works, and I cleaned it and had a new belt installed when I got it about 35 years ago.  It takes coordination to run, and has been preempted by a White, several Vikings, a Babylock and a Janome.  It has been used as a school photo repository for the past 10 years.

At one time there were many, many local manufacturers of sewing machines, many of whom were making them for distribution by others, and putting the distributer names on them when they made them.  Thus you may find the names Jones, Miracle, and many others on machines that are almost identical!

I for one am grateful to the many inventors and scoundrels who contributed in any way to the invention of the machines I so dearly love and use so often!

I miss sewing... I said something one day about missing sewing and the husband of one of our quilty ladies said "but you're doing all this quilting!"  What I explained to him is that the act of sewing is putting two or more pieces of fabric together and fastening them with thread.


What I do for the quilt guild at church is the opposite of sewing - I cut up stuff!


Each one of us in the guild, and in life, has different skills.  What makes life so delicious is that the combinations of those skills often add up to something wonderful that could not be done on your own.


You know about the symbiotic relationship between flowers and bees, they need each other to complete their various tasks.  That's how I view our church quilt guild.  Someone chooses fabrics and makes up kits.  That is me.  Someone or a lot of someones takes those kits home and makes the quilt tops.  They're brought back to the group and many someones make quilt sandwiches and find the bindings to match, and a final someone takes them home and quilts them.  Oh, not a final because we added last year a someone who takes the quilted quilts and sews on the bindings, because she can do that while keeping her health-challenged hubby company.


So while I'm a worker bee, doing my part, which I love, sometimes I miss sewing! 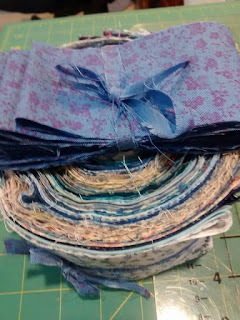 I cut small chunks into strips if they're width of fabric (WOF).  I had a big bin of 2.5 inch strips, and made a blue jelly roll.  The strips on top are for binding.﻿ 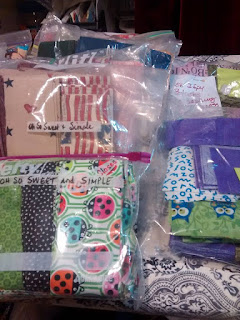 Then I cut up a bunch of kits - over the holidays, not all at one sitting!  Some were patterns we are familiar with, and some are for a new pattern called Oh! So Sweet and Simple, using strips and squares. 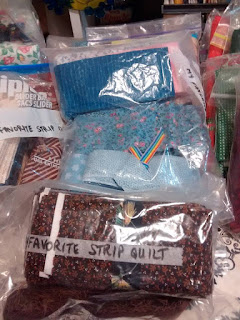 This is another part of the pile, a pattern using only 2.5 inch strips, called My Favorite Strip Quilt, a gift from our local quilt shop owner. 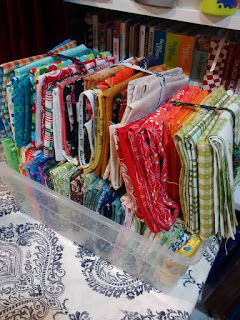 And this bin is full of matched sets of fat quarters for a pattern called Yellow Brick Road.  They require further cutting, although the pattern calls for cutting as you go.  The first part of prep is pressing, and cutting the first set of strips.  More cutting happens after the first round of sewing.  It's a pattern  I love but it does require a certain level of attention as you're working.


So I was very happy to find time to make this: 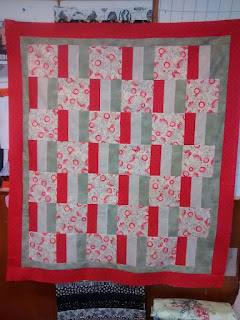 a small three yard quilt, using strips and blocks.  The name escapes me oh duh!  It's in the photo of the kits... Oh So Sweet and Simple! -- and I was supposed to turn the striped blocks sideways on every other row, but forgot.  Oh well, it's pretty. 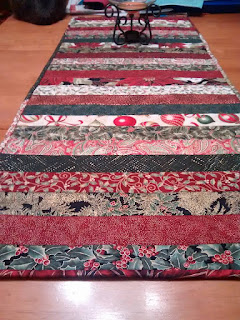 And this table runner for my kitchen table.  It's a quilt as you go, all strips.  Kid of a simple project but so pretty on the table.


That was a couple of  weeks ago... I need to find more machine time.  Although my main machine may have to go to the hospital, she decided not to go in reverse anymore!


Isn't it always something!!