Whatever I did to restore comments apparently only works on new posts.  Perhaps because I had a thirteen year old helper rather than the requisite nine year old, or I read the directions incorrectly or something.

Regardless, you may now comment if you choose on new posts. 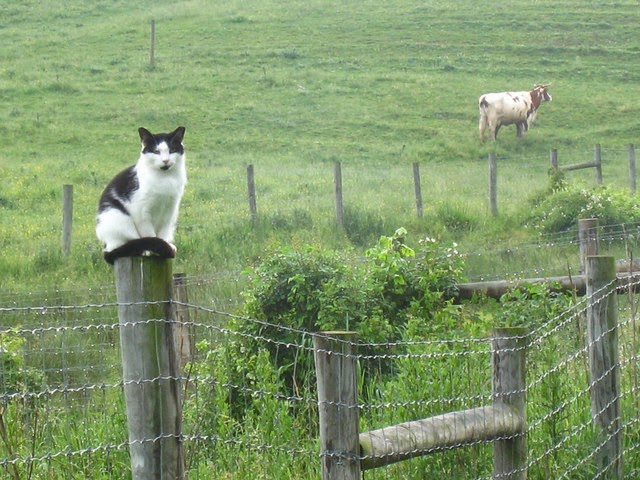 Posted by Sewing Sue at 8:50 AM No comments:

Evidently somewhere along the line, either through change in Blogger or the infamous User Error, the ability for you the reader to comment on my blog posts has become invisible.

Rest assured that I am working on it.

I think I have to get a nine-year-old to help me. 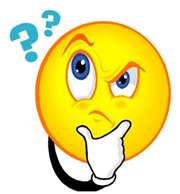 Just like making a quilt or garment leaves scraps, so does knitting and crochet.

I had a bag, a box and a fishbowl that were all full of tiny balls of yarn left over from previous projects.  I'm talking small -- too small even for making doll sweaters.  Some of them could have made doll a SLIPPER, but really, how many dolls want only one slipper?  I'm not changing yarns and weaving in ends in a slipper that is less than 3 inches long.

So I decided to try to use all of those bits and crochet an afghan for the back of the sofa.  When I first learned how to crochet, I made an afghan using a neat pattern that put stitches down a row from where you normally do, and alternating them every ten stitches or so created a kind of zigzag pattern.  Done in colors with black and white thrown in for contrast makes a striking garment.  Plus I love black and white stuff and I have LOTS of black and white yarn. 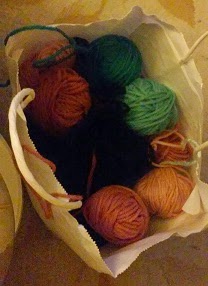 The beauty of this method is that you don't have to have 'the right amount' of yarn, they don't have to even be the same kinds of yarn, although I found out that if you're using pure, shrinkable wool with acrylics and washable wool, you could have a problem, so all yarns should at least be washable.  If not, you'll be dry cleaning or hand washing a blanket!

In the zigzag pattern, you did one row at a time, going right to left as is normal in crochet, and cut off the yarn at the end of each row. 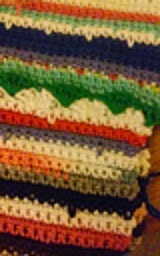 You can see where I changed colors in the gray stripe just before I ended the row... I had run out of yarn completely so I just tied the new one on.  All the ends are hanging loose, like eyelashes where the color changes.  The black row has one stitch that dips down into the previous row and forms a point.  I even tried some shells for a couple of rows.

The great thing about this project is, it's done, the stash is busted, and it's warm when I toss it over my legs on the couch.

Ever had that feeling??  Sometimes I feel like I'm really off -- a salmon swimming upstream, or a bird flying north when everyone else is going south.

I sit near a guy in our office who makes a lot of noise.  We're in open cubes, and when he's not here, it is very quiet.  When he IS here, well, for instance today he kept saying

That's not something you want to hear all the time -- I mean it's OK if you're making toast and it gets a little burned, but if you're designing a retaining wall or a jet airplane, that's not a good thing!  (He isn't doing either, so don't panic!)
Sometimes it's just that you're doing the right thing, but going about it the wrong way... like sewing the left sleeve in the right sleeve opening.  Or picking up the stitches on the wrong side of the neck edge of a sweater.

We've been hearing a lot in our state recently about people who are driving the wrong way on the freeway.   It's OK right up until the moment you run into someone and cause a major accident.  This usually happens around 3 a.m. after bar close and generally involves an excessive level of blood alcohol content. 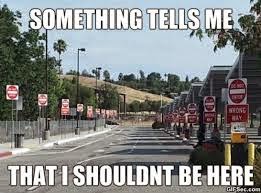 Then there's the Toilet Paper thing... there's a big debate.  Rolling off the front or rolling off the back.  For most of us, it's just a matter of preference. 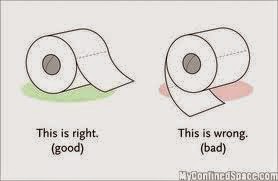 However, if you live with a cat or even a toddler, there can be a wrong way to do it. 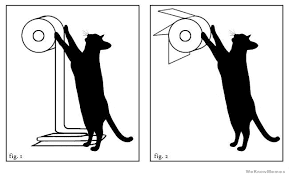 I mean I try to do things the best way possible.  I get upset with myself when I make mistakes.  I'll admit it, I'm a Type A personality most of the time.

However -- it's good to acknowledge that we're ONLY human.  I've been hearing a lot about giving yourself permission to make a mistake or have a bad idea.  I was watching a TV program, and a very creative person said that for every wonderful idea she has, she may have 40 or 50 stinkers.  Wow!

Think about baseball.  A player with a good batting average - the top 5 in any season - may be at .325 or so, according to Wikipedia.  The best there is in baseball may only achieve .372 in a lifetime.  That's just a little over 1 hit every three times at bat.  And home runs?  The best Babe Ruth ever did was an average of 1 in every five games. 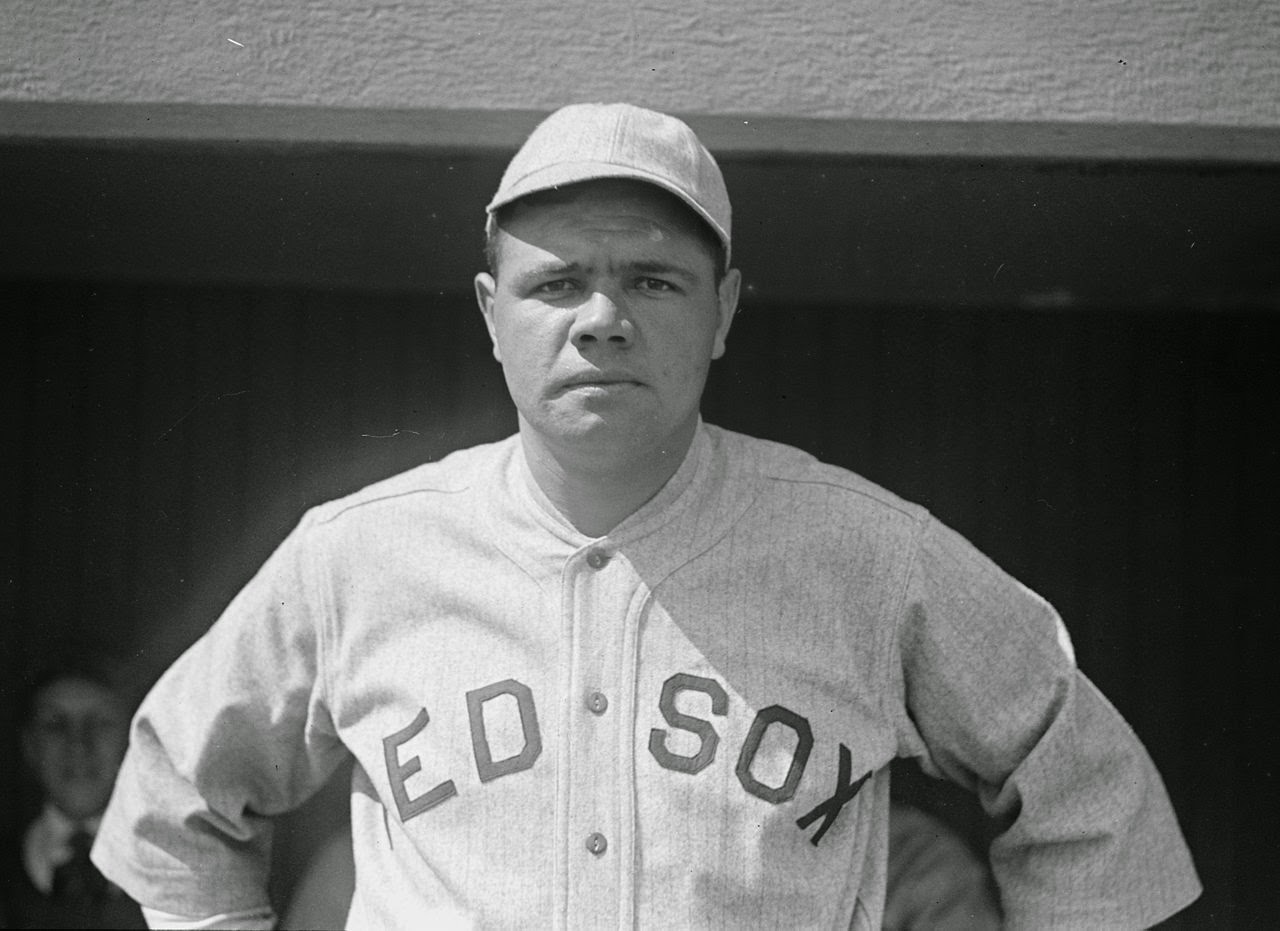 And let's not even discuss the weatherman!

We have good days where we bat 1,000 - a hit every time.  Sometimes we strike out three or four times in a row.  So sometimes when things are not working out for you, maybe you're just doing the right thing in the wrong way... 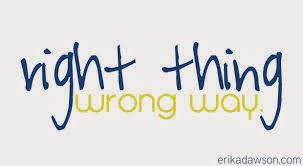 ﻿Take a deep breath.  Step back, look at things again.  Toss anything that isn't right, but give yourself permission to use the stuff that doesn't work as a jumping off point to fuel your creativity and do things over.  If it doesn't work, at least you tried something.
Maybe all you need is a new perspective!