This week has gone whizzing by!  Sometimes they're like that.  Other times not so much...

I have my favorites, don't you?  I really should update my list because I've added a few more and a couple of people aren't blogging regularly.

Every day I have to check on Rita Farro's world.  She's redoing her laundry room.  She has a thing for painted furniture that fascinates me.

Then I usually check out what's up at Patchwork Times with Judy Laquidara.  Funny thing, I was looking for sewing blogs and hers caught my eye because her last name is the same as a guy I used to work with, but it's not the same family.  I have to hear about Judy's chickens, and her dogs and cat, and what's going on in Texas, like how many scorpions she saw today!

I also read Carrie Nelson's blog.  I used to read her over at Miss Rosie's Quilt Company, but she recently grabbed up a position at Moda, so that's exciting and cool.

Sometimes I pop over to Madison to check in on Denise Russert.  It's her fault She's the reason I started shopping at the Loopy Ewe... !!

Recently I've been checking in on Mary Fons at Paper Girl.  Mary's been on my mind lately because she's going through some health issues but also because I am a big fan of Fons & Porter, and now Fons & Fons!  I've seen Marianne Fons speak at various venues.  Did I ever tell you that I once made a set of oriental vests for Marianne and Liz?  Never saw them wear them, but oh well...  anyway I love Mary's writing style and her fresh approach to quilting.  She's on Facebook if you're interested.  Keeping good thoughts for Mary!

I don't watch a lot.  I probably watch too much than is good for me, but there are a few things I just love.  Sewing with Nancy of course, CSI in all its versions, NCIS, Major Crimes and Rizzoli and Isles.  Noting a couple of themes here??  LOL!

But I also watch stuff on PBS like Downton Abbey and Grantchester (both period dramas) and Masterpiece Mystery no matter what's on.

Lately on Thursdays DH and I have been watching Around the Corner with John McGivern.  He goes to some local neighborhood and finds out what's special and cool about that area.  Last night the show featured Sturgeon Bay.  For the non-initiated, you have to drive through Sturgeon Bay to get to the picturesque confines of Northern Door County.  It's in the center of Southern Door County, the gateway to vacationland, but that's another story.

So I'm watching the program and because I've been there I was enjoying it immensely!  When what do I see but a friend of mine on the screen!  Yep, I almost fell off the couch...  first the voice.  I know that voice.  They're showing a small church and I hear a familiar voice.  Then THERE she is on the screen, Nancy Bontempo!  We used to work together a couple of jobs back, and we became very good friends... I adore her hubby too, he's one of those people you just have to love.

Anyway, there she is talking about the Friends Community Church.

I knew she moved to Sturgeon Bay, she grew up in the area and worked in Green Bay after high school.  But I didn't know she was a Friend...
The Hair Cut:

I FINALLY got my hair cut!!  I completely blew my January 22 appointment.  Well, it's not totally my fault... they always --- always -- call and remind people of their appointments.  Except when the receptionist takes a vacation.

And that's the one I put in my calendar as January 29.

Close but no cigar.

Turns out several people missed their appointments that week.

I still feel stupid.  And my hair was OUT OF CONTROL for almost two weeks.  UGH!

Yes, I did get something done this week: 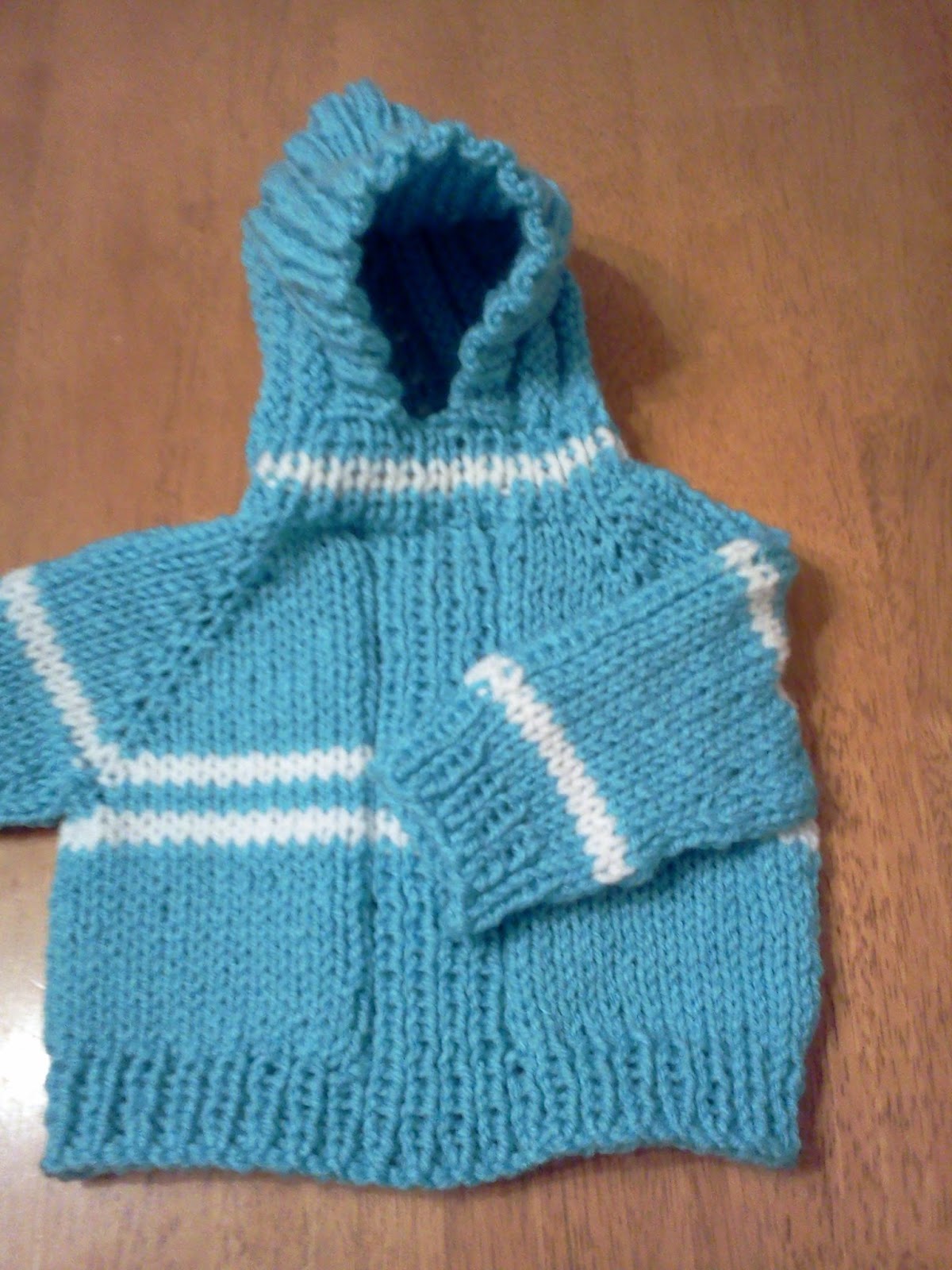 I finished everything on this sized three months baby sweater except sewing in the zipper down the center back.  Yesterday I showed it to my daughter while Hubby was looking.  The conversation went like this:

Daughter:  That's cute.  I like the color.
Hubby:  Who's that for?
Me:  Son's co-worker is having a baby in the spring.
Hubby:  How do you know it will fit?  It looks kind of small.
Daughter and me simultaneously:  IT'S FOR A BABY!

I wrote about going to visit Janice in the nursing home, after which we went to a thrift shop and to Ben Franklin crafts, where I picked up quite a number of yards of fabric.  Mostly out of the clearance bins, but I did buy one piece of regular priced fabric.  It's a floral print with a gray background and pink, yellow and green of course.  I figured out the repeat and cut three pieces to do a Stack and Whack kind of thing.  I really like it!  But I only bought one yard and the repeat is pretty large.  I might have to go back there tomorrow.  Oh well...

Saturday my friend Suzi, my oldest granddaughter and I went to visit a lady from our congregation who is in a nursing home recovering from a stroke.  We dropped in with a quilt from the church guild and to offer her a small bit of comfort and love from those who miss seeing her on Sunday morning. 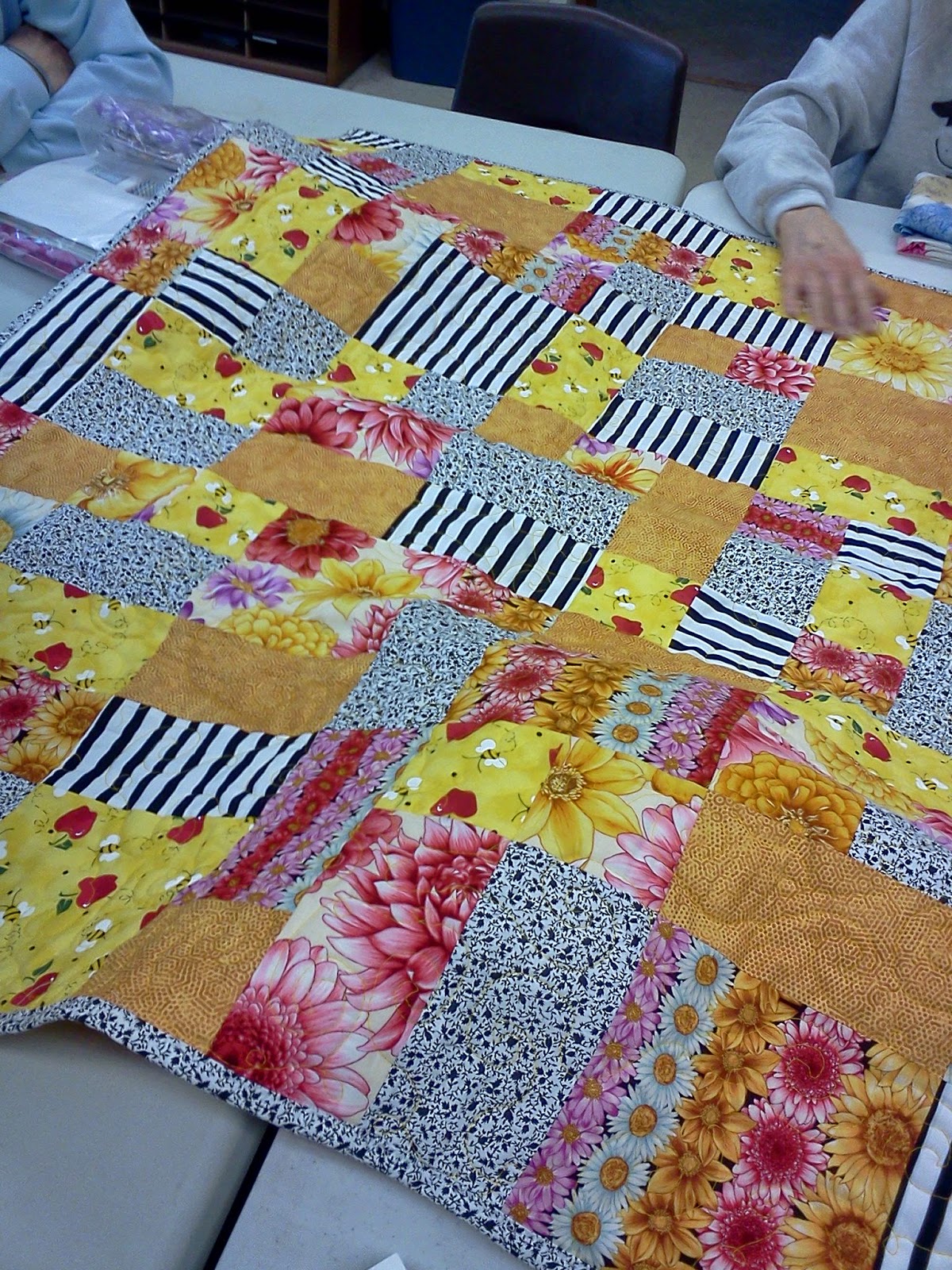 We chose this quilt to deliver.  I'm not sure why, maybe it was the brightness or the quilting or just because it was near the top of the pile.

It must have been meant to be because Janice was wearing a tee shirt in a flowered print with yellow in it.  She smiled a lot when we laid it in her lap.  We told her how much love came with it, and prayed with her that it would aid in her recovery.

She struggled to say something, not because she was choked up, even though she was, but as a result of the stroke she struggles to say anything.  It's frustrating to be unable to convey even the simplest ideas, and my heart just broke for her.  I'm sure she's getting therapy but she's not really able to visit back.  I pray we brought her some enjoyment!

I'm determined to put visiting her again on my list of things to do.  I might find something interesting to read to her next time.

As we were leaving the building we spotted a resale shop we'd never seen before.  We decided to drop in and see what they had.  Kind of restoring the heart after feeling so sad for Janice.

Here are my most favorite finds:


So all in all it was a good day.  My granddaughter found some neat stuff both at the resale shop and at the Ben Franklin Crafts store.  We had a nice lunch and got home before the snowstorm. 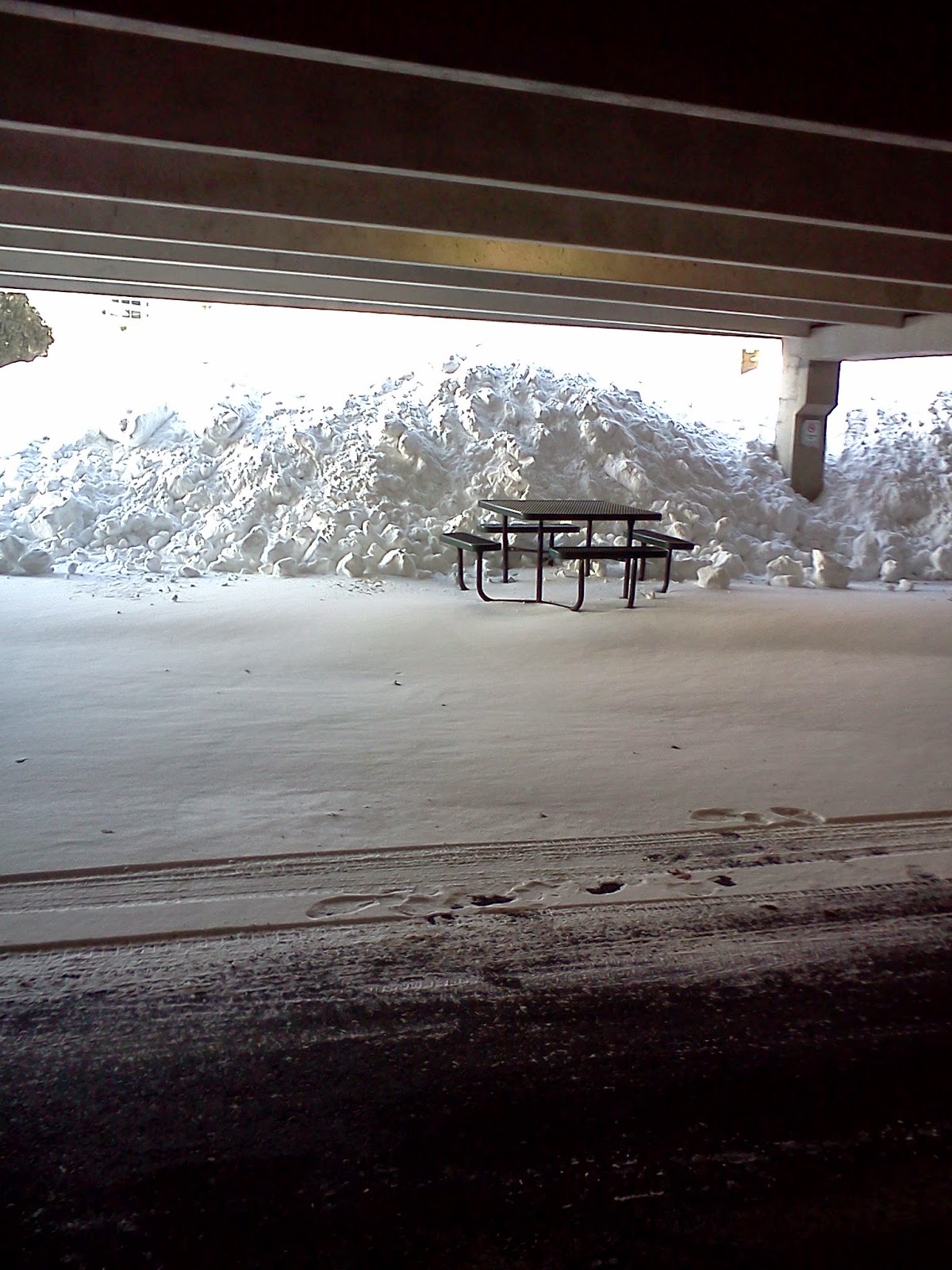