I went to Nancy's Notions Sewing Weekend a couple of weeks ago.  It's been held the same weekend as my birthday for several years now.  I feel that this fact allows me to buy myself something nice that weekend, something beyond the usual fabric, patterns and notions.

This year I took some classes from Gail Yellen of Gail Patrice Designs.  One was called Cosmetic Sergery.  It sounded interesting, and since I have a serger that I like, I thought I'd see what she had to say.

I was impressed with everything she knows about how stitches form and other technical stuff.  I mainly use my machine to sew seams and finish raw edges so I was prepared to be wowed and I was very pleased.

After seeing the ruffles she made with a few simple adjustments, I was SO ready to go home and do that!  Miss A loves ruffles... and she likes skirts with ruffles most of all.  After watching Gail do a ruffle in mere seconds, I knew what I was buying!  New feet!

Now seriously, when I told people that, they laughed...

I picked up the clear foot, just because I could and at 33% off, why not?

I also got the cording foot.  Gail made this really cool button cording using this foot and skinny elastic with decorative thread.  I'm in!

I got an elastic foot too, as long as they were on sale.  Gail showed how to add elastic to a waistband with the serger, then you just turn it under and topstitch.  True no-roll elastic!

And of course the ruffling foot.   I'm trying to type 'ruffler' but BlogSpot wants to spell check me.

So maybe if I get some time to sew, the grands will have some fancy summer skirts and dresses soon!  And when your birthday comes around, feel free to give yourself a gift you'll enjoy, whether people understand it or not!

Happy birthday to me.

I love coming home to find packages on my kitchen table!  Of course DH is not nearly as enamored as I am with visits from the UPS man, or the mail carrier! 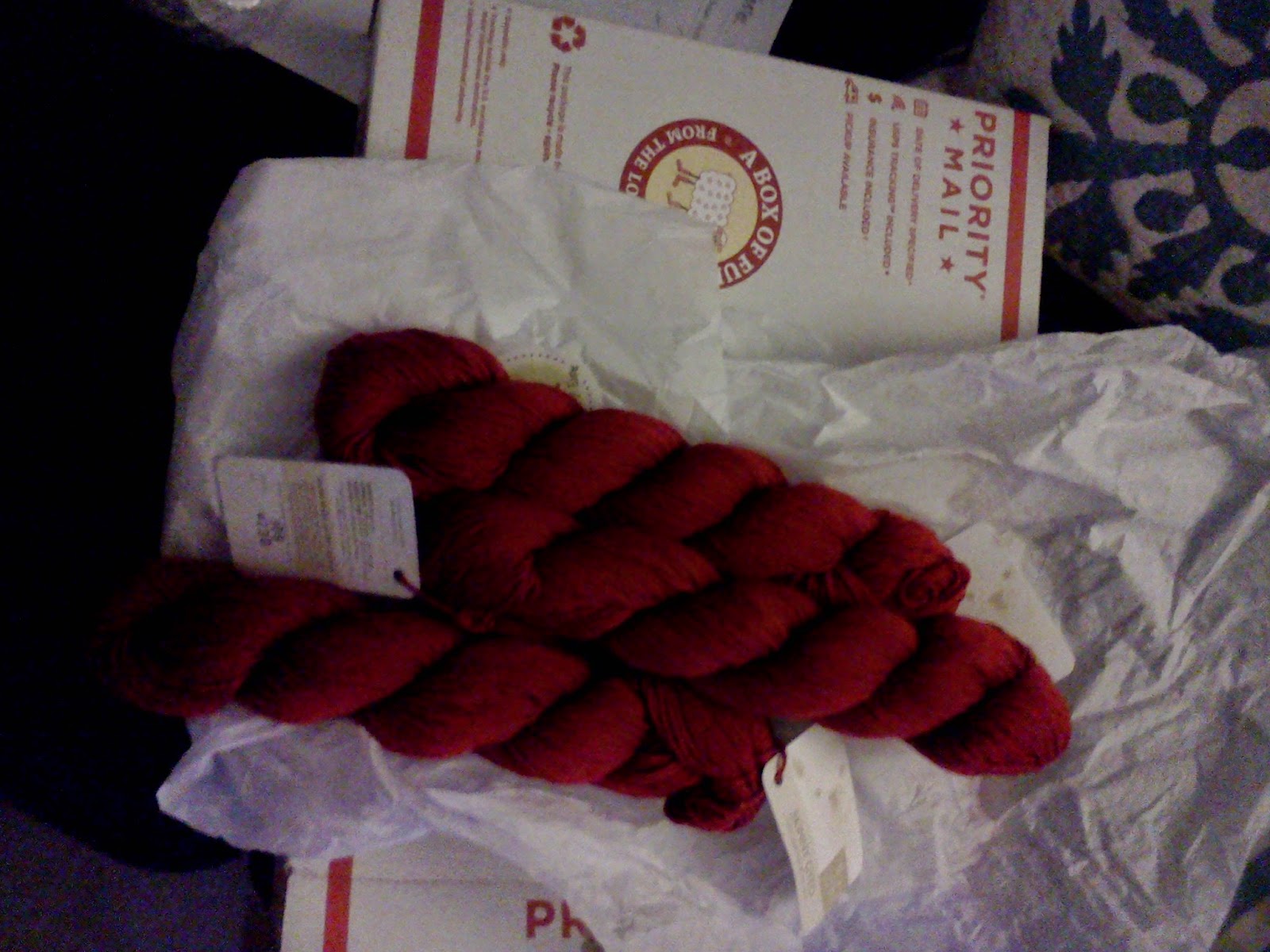 Yesterday this box came for me from the Loopy Ewe... lovely red cotton yarn, hand dyed and silky-feeling.  I spent about half an hour while I was watching Foyle's War on PBS winding it into balls.  This is about 450 yards.  Yes, it costs more than Red Heart or any of the choices at the local craft store, but look at that color!  I don't splurge often, but this called me.

The plan is to find a scarf/shawl pattern and knit it up during the month of June.  I am not saying I'm going to Camp Loopy, but I might just try it!  I'm thinking of something that could be tossed over the shoulders when the air conditioner is running this summer.  My mom used to say keep your back warm and the rest of you stays warmer.

What's Camp Loopy?  The Loopy Ewe shop in Colorado is run by a very creative bunch.  They issue challenges to get you motivated to knit and finish things.  This summer there are three month-long challenges to knit something that reminds you of a movie or show you have seen, using 400 yards (purchased from the LE).  If you do it, you get a discount on yarn you buy FOR the camp, and if you finish you can post your project.  I think there are rewards for doing the challenge, and more if you do all three.

I didn't pay attention because I'm not committing.  Yet.  Maybe I'll do July's if I can finish one in June on my own.

You know my level of commitment on knitting... 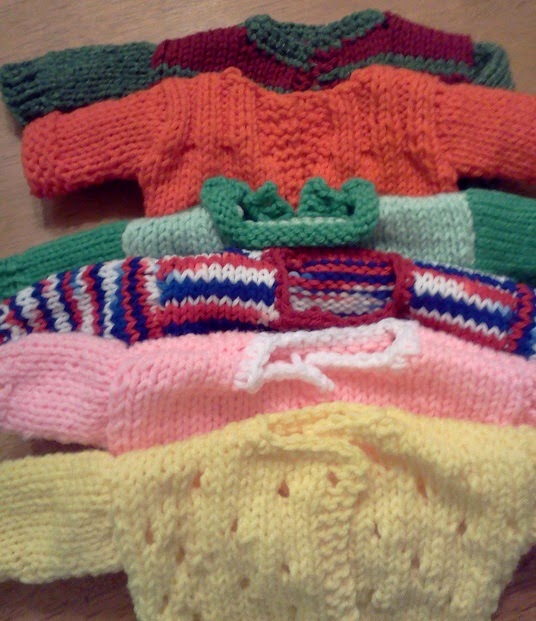 These items take little or no time and are fun to do, no pattern to follow really, and if they don't turn out, there's not a lot of resource wasted.  Research shows that knitting and crochet provide zen-like opportunities for your mind to rest from the madness of normal life, which can work to keep your brain young.

I have knitted children's sweaters, scarves, etc.  But not normally in this tight a timeframe.   So we'll see.

I also purchased two skeins of a yarn called Madelinetosh in a color called Georgia O'Keefe.  You can't tell from this photo but it's a gorgeous blend of dark greens and a little brown thrown in for fun.  Who could resist anything named after Ms. O'Keefe, and green is my favorite color. 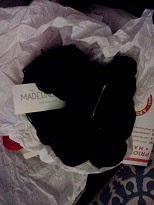 Sorry for the horrible photo, my camera is on the blink and I'm using the cell phone.  Think luscious dark green soft wool yarn, hand dyed and slightly textured.  Got it? 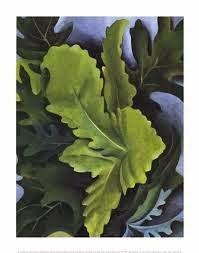 Georgia O'Keefe was a famous artist and painter.  She was born near Sun Prairie, Wisconsin, which is near Madison.  She studied art in Chicago in 1905-1906, painted during the early to middle part of the 20th century.  She moved to New Mexico and became famous for capturing large floral blossoms and dried animal skulls in great size and detail.  Her first show was without her consent (although she later agreed to keep things going) arranged by Alfred Stieglitz, a gallery owner.  They later married after much scandal for the time... he had been married when they met.  It's interesting reading if you're so inclined.
Here's Georgia in her later years in the southwest where she painted.  I love her story, a modern woman ahead of her time, comfortable in New York and New Mexico, making her own way and being creative until her death at age 98 in 1986.﻿ 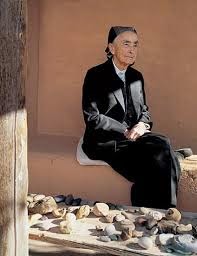 Did I tell you the Loopy Ewe sent me a gift too?  This little package was included in my order, it contains a pattern with just enough yarn to knit a sock shaped needle holder, and six project cards that can be given with gifts (they have a place to say what the project is made of and how to launder, and have  a gorgeous photo of yarn on the back.) 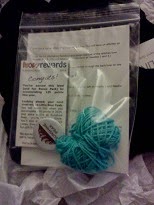 Monday was an altogether good day.

Now if I could only find some time...