There and Back Again...

Something happened between Christmas and today that had me baffled.  Blogger changed some things or I changed something or I neglected to change something, and well, we fell out of sync or whatever.  But today I had what I can only call divine inspiration and tried some back door stuff and here I am again, or so it would appear.

Randomly, since December we moved house, I had eyelid surgery, it showed, we spent a month unpacking and getting rid of cardboard boxes, it snowed, the weather got VERY cold and then warmed to freezing, my sewing room got halfway put together, I hurt my back, then hurt my knee, it snowed, it got cold... duh.  It IS winter and it is Wisconsin after all.

Or so said one guy they interviewed on the news one evening.  Quote "I don't know why you people think it's news... it's WISCONSIN, what did you expect?"

I love that guy!

In the shop we got some fine new things.  Before we moved house, I made some sample soft books for small kids.  One was Noah's Ark, the other was this fine book on dinosaurs. 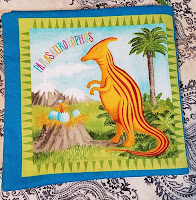 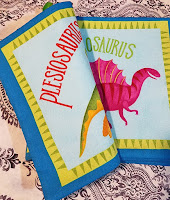 After the move and the eye surgery, I finished the black and while Escher quilt that was supposed to go to my SIL for Christmas.  I have it pressed and am waiting for 108" wide black backing so I can get it quilted. 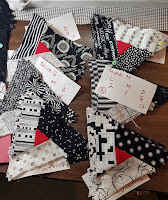 I ran out of one of the light fabrics and I cut the bottom off the first five rows one block north of where it should have been cut... which would have resulted in a shorter, but wider, quilt than was intended.  That would NOT do.  I searched high and low as much as I was able to find more of the red Spin Dot that is in the centers.  No luck.  I got a small piece from the shop and attempted to replace the half blocks that I messed up.  then I discovered that the one stripe I needed for TWO of the blocks was gone.  I did find an appropriate substitute, but that meant remaking an additional four blocks, and disassembling two rows at least part way.  It was time consuming but not impossible, although it would have been much easier had my sewing room, or at least my big ironing board, have been put up for use.  But it's all set up now, and I did finish. 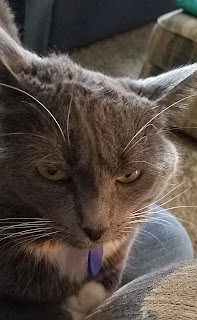 Miss Kitty has been adjusting at a decent pace.  She still tries to sit in my lap when I'm trying to knit, but at least she stopped whining ALL the time, and she has for the most part given up on rattling all the closet doors.  She discovered a couple of squirrels outside the living room window, so Cat TV is back on the air.  Not that you can tell from that face... 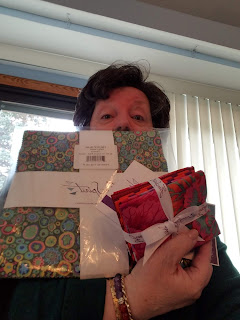 I participated in the Kaffe Mystery with Free Spirit fabrics.  The monthly packets were interesting.  One month a snowball of gorgeous Kaffe prints and your basic contrast fabric, and then next month a checkerboard of same... I did the dark.  I'm glad I chose that because I think it was the most impressive in the end.  I can't wait to complete the top.

Each month you were encouraged to post a picture of something related to the mystery.  In October they asked for a seasonal picture.  I posted my blocks with a cute little pumpkin on my kitchen table, and I won the prize for posting!  When it arrived I was quite impressed with its value -- a layer cake of Kaffe plus a packet of fat quarters in all of my favorite prints in RED, which I love!  So I posted the photo above with a Thank You message to Free Spirit.

Now that I'm laid up with a knee injury the sewing me be a bit more difficult, but I can knit!  In a class at my favorite local yarn shop Cream City Yarn in Brookfield, WI, I knit an adorable baby sweater from a pattern called Welcome to the Flock by Julie Farwell-Clay.  Here's a link to the pattern on Ravelry.  Pattern  It's not free (it's $6) but it's so cute that if you knit for babies you'll probably want to buy it.

Mine will probably be a baby shower gift in the fall.  I have enough yarn left to make a hat of some sort.  I'm not sure about making the hat in the pattern because I prefer baby hats that a-cover the baby's ears and b-tie or somehow fasten on.  Nothing's worse for me than a baby who looks like he/she feels cold, and a bare head looks cold when it's sweater weather!

This is a long enough post for today.  The knee and back are not comforted by a lot of sitting at the computer, and I have some prescribed exercises to do before physical therapy happens tomorrow.

Keep calm and carry on...

Posted by Sewing Sue at 9:50 AM No comments: