The aunties and cousins and I get together almost every Friday night for sewing night.  If you visit me often you probably already read about Becca's project.  She's nine, and she does a bang-up job!

Last Friday there was no sewing, and it was kind of a mystery as to why for a while.  But our hostess was off doing some other stuff.  I had taken off early in the afternoon because I knew I was hosting the two next door grands until later in the evening.  So we had our own sewing night.

Of course Miss A organized us all and laid out the dolls who were also attending.  She set up her 'desk' with doctor's office things and took care of several broken appendages with colorful bandages.  She had us all read our contracts and sign them to admit our injured babies.  Boy, does that girl's mind go a million miles an hour!  She's like a Philadelphia lawyer...

I have a system with scraps that provides instant materials for times such as this.  Face it, with two adolescents in the sewing room, I'm not actually going to get any serious work done!  But I have my two inch strip drawer and my 2 1/2 inch drawer and my 'scraps to cut into usable pieces' basket, so I was all set. 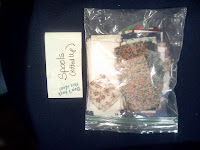 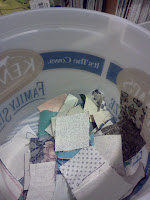 Previously I had assembled some quilt blocks using the 2 inch strips.  I made the block that is sometimes called Jacks in various kiddie prints and whites.  Miss A decided that she was going to do the sorting and snipping of threads and Miss E would do the pressing. 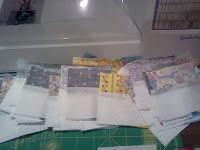 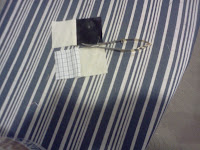 Surprisingly, well actually surprising to no one BUT me, Miss E decided that she would press, and she wasn't one bit afraid of the iron.  Her mom later said that in her Girl Scout group she was the only one who knew how to use the iron.  Goes to show they're growing up while I'm not looking again.

Anyway, Miss E pressed all the blocks I had done, then was looking for more.  So I started sewing my 'sorted' two inch strips together with the whites, and made more sets, which then turned into more blocks.  Miss A reacted in amazement when the blocks were pressed open -- where did that pattern come from??!!  Really, those strips turned into that pretty design??  WOW! 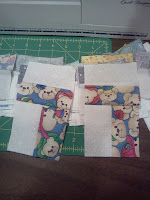 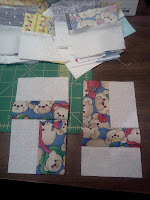 This is how so many new quilters react when those intricate patterns turn out to be nothing more than strips and squares when you break them down.  I have a pretty large pile now, I should be able to put some flimsies together this weekend. 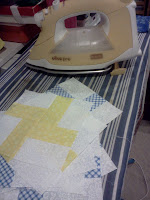 Unless, of course, the girls decide we need another 'sewing night'!!  Then I'll have to wait for direction from Miss A.  :-)

Just finished a book by what to me is a new author -- Kate Atkinson.  The book is called "Started Early, Took My Dog".  I picked it up at the local used book store because the title was interesting.

I started reading it, and the character name sounded familiar.  Jackson Brodie.  Hmmm, where have I heard that name before??  Well, as it turns out, this book is not the first by Kate Atkinson, nor is it the first about Jackson Brodie, although it's the first I've read.  There was a Masterpiece Mysteries series on PBS a couple of years ago.  Seems that someone in the UK turned her earlier book, Case Histories, into a made for TV movie.  Oh, I think I made a mental note to look up Kate Atkinson in the bookstore after I'd seen the credits.  So much for mental notes!

Well, if the author didn't stick in my head long, it didn't hurt that the yummy Jason Isaacs played Jackson Brodie, and that's what remained in the back of my mind. 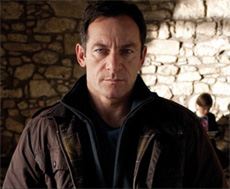 Does he look familiar??  Way back when I was watching, I remember I was trying to remember where I've seen him before and suddenly it hit me! 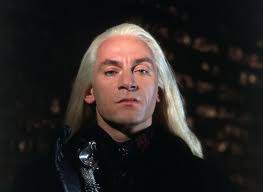 Lucius Malfoy!!
For the uninitiated, or if you've been on Mars for the last 10 years, he's one of the villains from the Harry Potter movies.
Actually he's been in some other big things, Black Hawk Down, Armageddon, in 2004 he was on The West Wing.  How did he slip by me in those roles?  Must have been the white hair that made his face so memorable.
Anyway, I'm going back to the bookstore for more Kate Atkinson.
Sew on!﻿