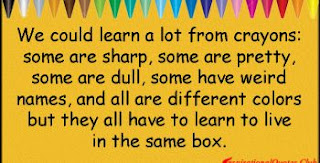 Time for the kids to go back to school.  How exciting is that?  The girls started school on Thursday this week, so they now have two full days under their belts. 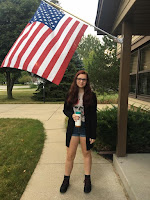 Miss E says the second year of high school was not as stressful to start as the first year. That's a good sign, because every time I ask her how school was, she replies "horrible".  I don't get that, because I loved school, and I still love learning things.  Oh well. 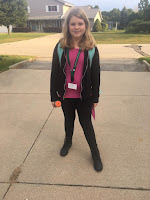 Miss A says middle school is confusing.  Evidently a lot of the fifth graders were lost the first day, which is normal in a new school, especially one that is larger than the one you attended previously.  She says she doesn't know too many people on her bus either, except the driver!  He's a man who goes to our church, and he's a good friend.

I spent this weekend catching up on my retail therapy... I hadn't been to the green market in a while, so I did that today.  I bought three of the biggest tomatoes I've ever seen.  We had BLT sandwiches for dinner tonight.  I picked up some small cucumbers and some squash, and the year's first corn on the cob.  I just love the fresh veggies!

Then I did the rounds of some quilt shops, the Amazing Goodwill and the yarn shop.  I went to the office supply store and picked out a new printer which will be delivered next week by the UPS man.  I got tired of trying to figure out why the old one refuses to print anything no matter what I do.  Maybe it was just too old to function anymore... plus the one I'm getting is wireless so everyone can use it. 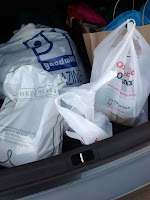 On Friday I stopped at Patched Works and picked up some fun new notions from Moda.  The bag that says MAKE contains small clothespins that say things like "Measure Twice". 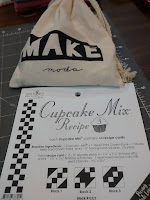 Then on Saturday I stopped at Quiltagious to get my free August yard of fabric.  I could not resist the colors in this three yard quilt kit! 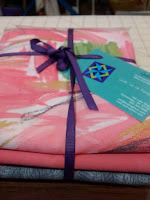 I scored pretty well at the AG, picked up a lovely purple quilted jacket and two handbags, one a Vera Bradley.  I picked up a second jacket too, and promptly ruined it in the washer.  Duh!  Read the labels, miss!  100% polyester LINING, the jacket was SILK.  It had been pleated and ironed down to iron-on interfacing.  Washing the jacket loosened up all the pleats and made it into a balloon!  Oh well, it was only $5.  And I did salvage the larger pieces of silk fabric.  That will get used somewhere.

Now DH is watching the preseason Packer football game and I'm contemplating watching a few of the recorded Jeopardy programs before I go to bed.  All in all, it's been a good weekend.

My thoughts and prayers are with those who are suffering from severe weather in the south.

Posted by Sewing Sue at 9:52 PM No comments: