At last, I think I have this lace pattern figured out! 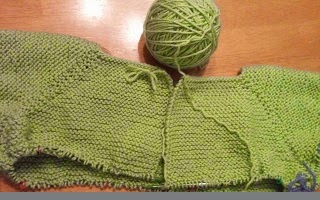 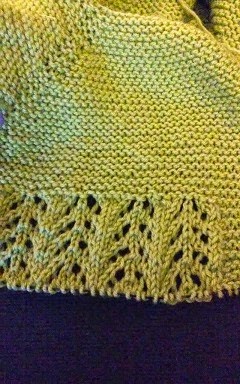 Ahhh, boo boos are gone.  Although I hated ripping the eight inches of lace out, on this side there was a big glob of stitches where I messed up on the number I needed to complete the last pattern and I had to just do increase stitches when I should have been doing pattern stitches.

Last night and the night before, I knitted after supper.  I have eight repeats of the lace, each repeat is four rows.  So four hours of knitting got me 32 rows.

I also checked the gauge -- so I needed fewer stitches.  Before I had 200+ on the needles, and I'm down to 167.  Before I ripped the measurement was about four inches bigger than I really needed.  It would have been like a swing coat!

When you have stitches all scrunched up on the needles, the garment looks only as big as the needles you're using, so for example I was using a 40 inch circular needle, and the stitches got bunched up in the center as I pushed them around to knit.  But once I spread out the front and measured it, it was way too big.  I don't like tight clothes but it was ridiculous.  The lace looks nicer when it's spread a little.  Too much fabric hides the pattern.  Besides I will use less yarn this way.

Moral of the story, check your gauge.  I know, it seems such a useless process sometimes, like prewashing fabric.

Speaking of which, I have all my prewashed fabric lengths ready for cutting out some pants for myself this weekend.  After church quilt guild, and the youth auction, so maybe Sunday afternoon.

Fingers crossed.  I am getting tired of nothing but black pants and navy blue pants.

Remember this project from a couple of weeks ago?  Yeah, I thought I was so smart, I'd finally started knitting something for myself.  This is a fairly simple lace pattern, as far as lace patterns go in knitting.  The yarn is a worsted weight, meaning 8 skinny strands of fiber twisted together into a fairly thick yarn, and I'm working on a size 9 needle.  It was going as fast as 230 stitches in each row can go when you have to count and pay attention to which row you're on.
Key words:  Pay Attention. 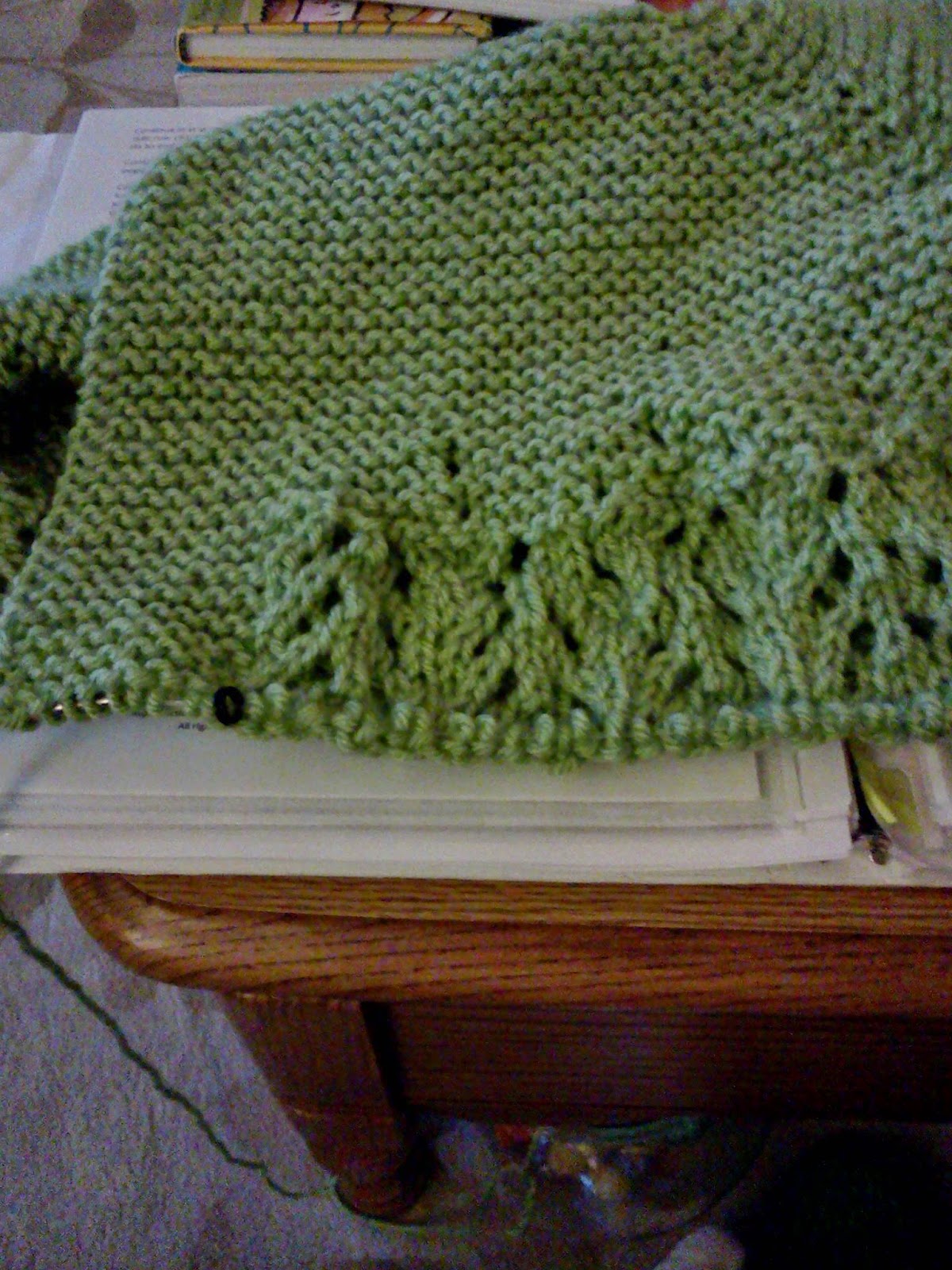 This is the left front.  It looks pretty good at this point. 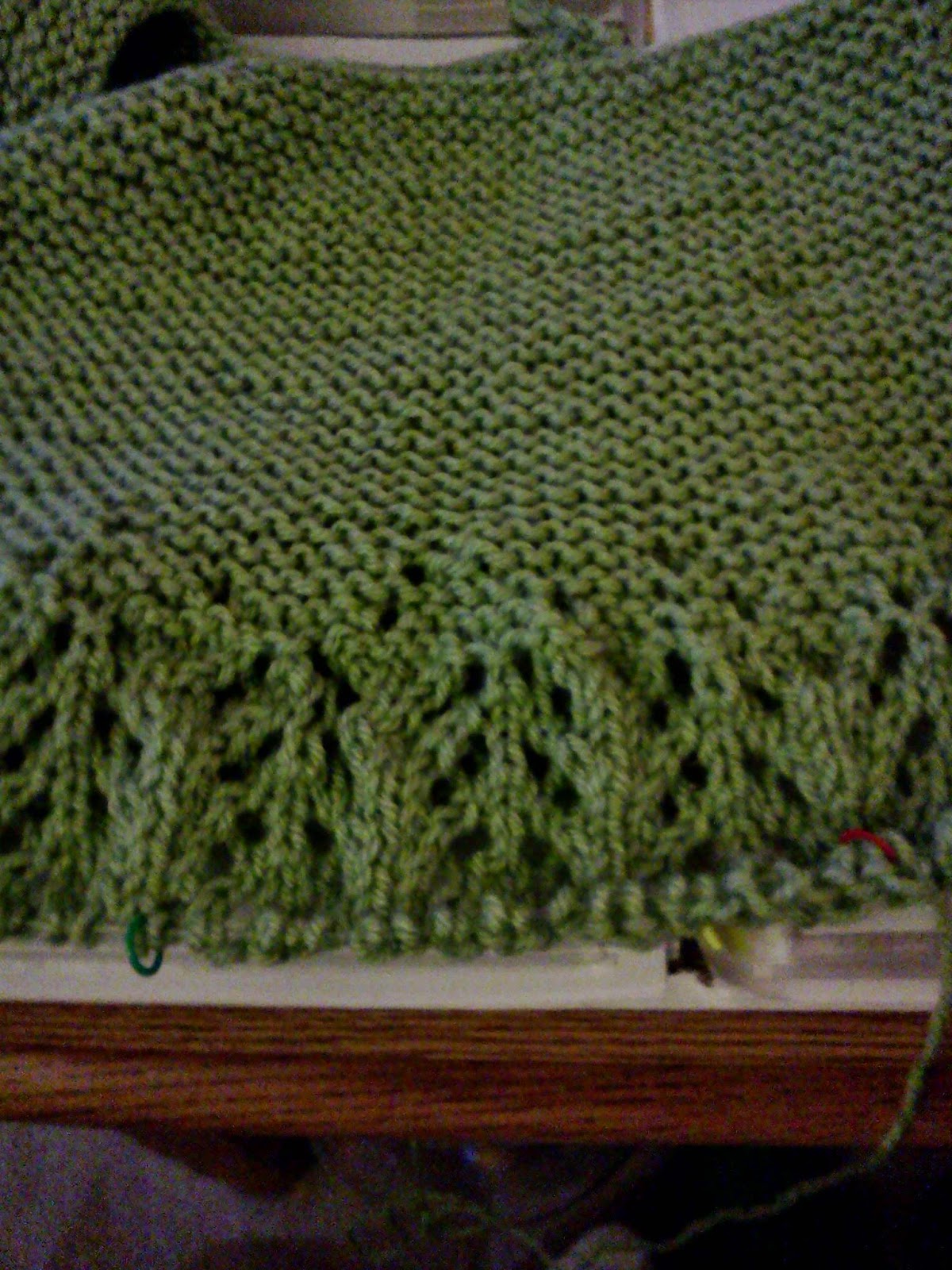 This is the back.  Also pretty good. 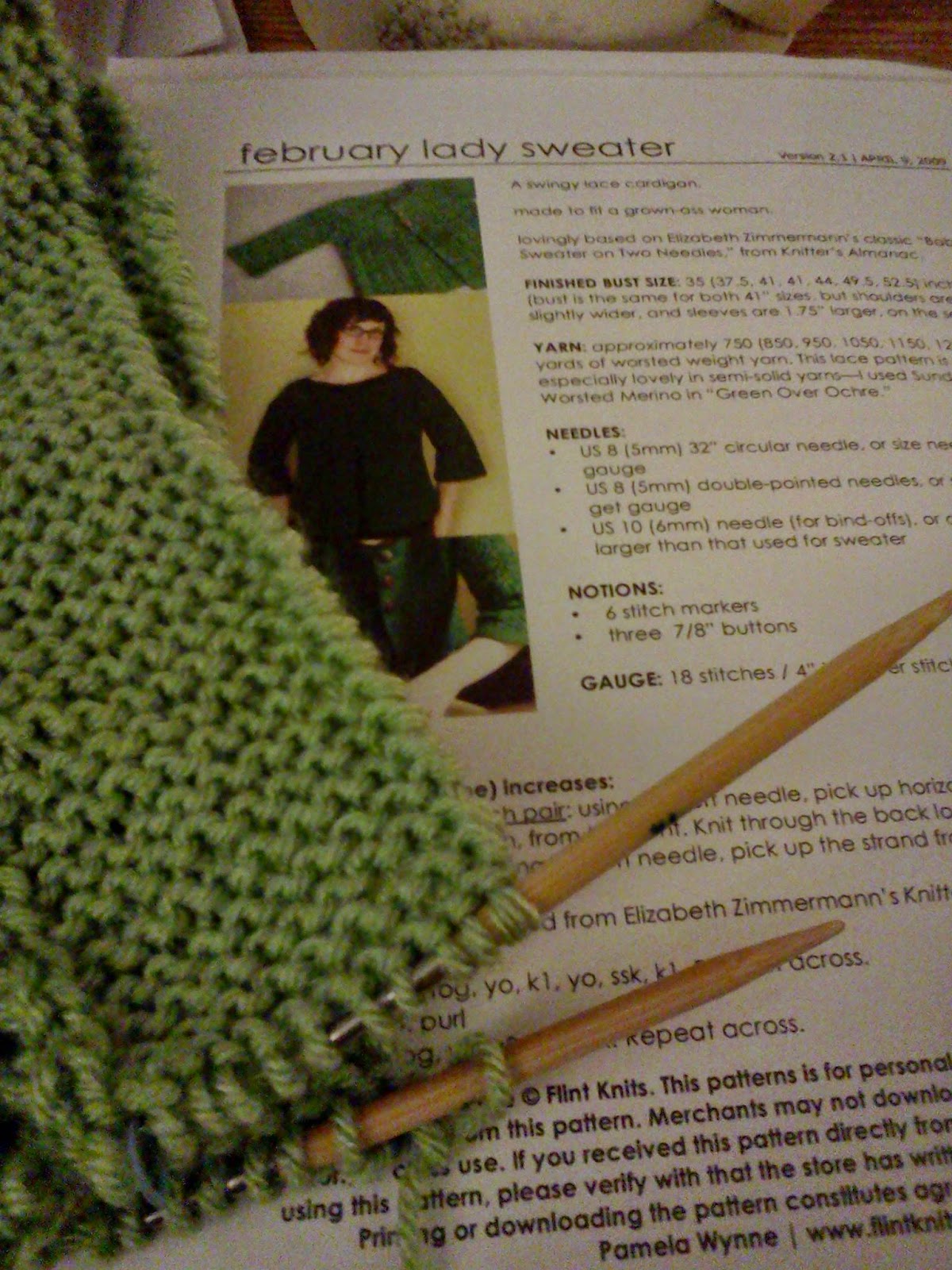 The pattern is February Lady Sweater.  You can find it on Ravelry.com.

So if you look at the 'back' photo, you can see the line of stitches between where the holes are.  The holes are offset every other row so they move out from that center line.

That center line SHOULD line up.  All. The. Way. Down. The. Sweater.

I had knit several evenings, probably a whole seven or eight, doing maybe another six or seven inches of pattern.  If you look at the first picture, my project is laid on top of the pattern, which is on letter sized paper, 8 1/2 inches by 11 inches.  At that point in time my sweater was about 10 inches from shoulder to where I was working.  So add six inches to that and you can guess how many stitches I had made.  The math makes my head hurt.

I was admiring my work when I saw it.  Actually them.  Five of them... five lines that took detours into LARGE holes and went sideways by a stitch.

One stitch.  I almost cried.  So I sat there thinking, would anyone notice?  Oh God, please let me close my eyes, open them again, and have it not be true.

I asked DH if he could see what I did.  He wouldn't see a thing, I told myself.  He can't find a bottle of catsup in the fridge unless it's on the edge of the shelf promising to fall out.

He said, oh yeah, I see it.  Is that big hole supposed to be there?

Dead before I even started...

This lace pattern goes over 7 stitches and repeats.  I count as I knit, one two three four five six seven.  I should be starting the lace pattern over again after seven, if I have lived right in that moment.

I know how to fix a booboo in knitting.  You can knit over to the place above the error, un-knit or frog stitch just that stitch down to the error, fix it and knit each row back up to the top.  In theory.  You can do a column of stitches or just one.  I've done it on smaller widths, or when the error was closer to the needles.  So I tried pulling out some spare needles and un-knitting those seven stitches that contained the first error, but there were SO many rows knit, I lost track of the pattern about an inch past the error and it just kept getting worse.  And I had this to do in FIVE places!

I unwound two large balls and put them back in the project bag.  Maybe I can wear this next February!

It's not always my fault.  Really, it's NOT!

Last night my daughter stopped over for a chat.  She had a big tote bag with her which her father was eyeing with suspicion.  After we talked for a while she said "I brought you some yarn."

I said "Oh, gosh" or words to that effect. Eye rolls from hubby.

Understand that my daughter is a talented person.  She does cross stitch like a pro, and knows how to sew but chooses not to.  She also does not cook.  Well, frozen pizzas and stuff in the microwave, but she is best described and most comfortable with the title of career woman.  Lucky for her she married a good cook and her older daughter likes to cook too.  And she hates to shop!

She always tells me it skipped a generation.  So when she tells me she brought me yarn, it could be great but it could be anything!  And she works in a hospital so where did she get yarn??

She took this bag out of her tote. 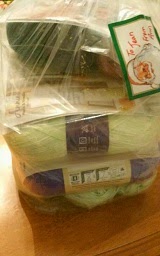 "My coworker had to get her mom into assisted living or a nursing home and she was cleaning her house out.  She brought some stuff in, and I said I'd take the yarn."

It's NOT MY FAULT!  The stuff just comes to me like iron filings to a magnet!

﻿She said she only took the stuff that looked new with labels on it.  There were some loose skeins and some individually wrapped packages of kits, yarn and patterns, from Annie's Hook Club.  Like Book Club but for needleworkers??  LOL!

Here's a pattern for fall veggies, beets, carrots and what I can only assume is an eggplant. 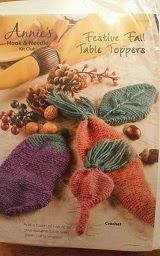 Then there was this grocery tote bag pattern: 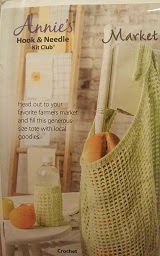 With this lovely green cotton yarn inside: 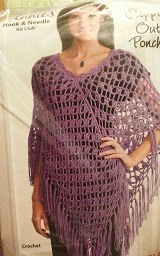 With Caron Simply Soft yarn in the shade of Grape: 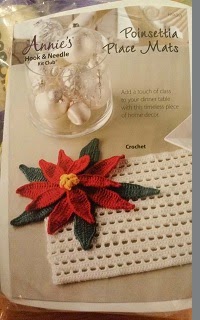 Three loose skeins of Cuddle yarn from Joann's in mint green, it's sport weight, so for a baby project, or maybe socks??

And two more skeins of Simply Soft, one in pastels and one in green:

More Annie's yarn... this is one brand I did not have in my stash previously.  (I did a google search on Annie's Hook Club, and it appears the value of these kits is about $20 each!) This is worsted weight and feels a bit rough on the fingers.  I wonder if it was supposed to be a kit.  There was a piece of cardboard in the plastic bag, but no pattern.

And last but not least, a big skein of sort of a dusty aqua with no label.  It feels like a Red Heart Super Saver yarn, maybe a 12 or 16 ouncer, one of those "Big Saver" things.  Or maybe it's an off brand, but it is very soft.  The color is truer at the top of the picture.  It was dark when I took it so the camera was working hard in artificial light.

So at least she didn't bring me any UFOs.

Managing the Stash. Or Not.

Spring is always a great time in southern Wisconsin.  The sewing expos start popping up after the holidays, and people cannot WAIT to get outside after being cooped up by all the snow and cold.

My friend Marlene called me a couple of months ago and asked if I was interested in going to Schaumburg IL for Sewing Expo.

I know, I know, I do not need any more fabric.  Or notions, or patterns.
Need has NOTHING to do with it.  You know I'm right.﻿
Since the University of Wisconsin announced that they are not holding the expo at Platteville, I've been kind of mourning the loss.  The organizers always seemed to find fun local shops to come in and display their wares and you discover new places to put on your 'shop hop' maps.

Do not get me wrong, I still L.O.V.E. Sewing Weekend in Beaver Dam.  It has maintained most of its quality even after the sale of Nancy's Notions to the parent company of Babylock.  But once a year is not enough.  (This year it's May 7-8-9.  You should go.  Seriously, you should!) 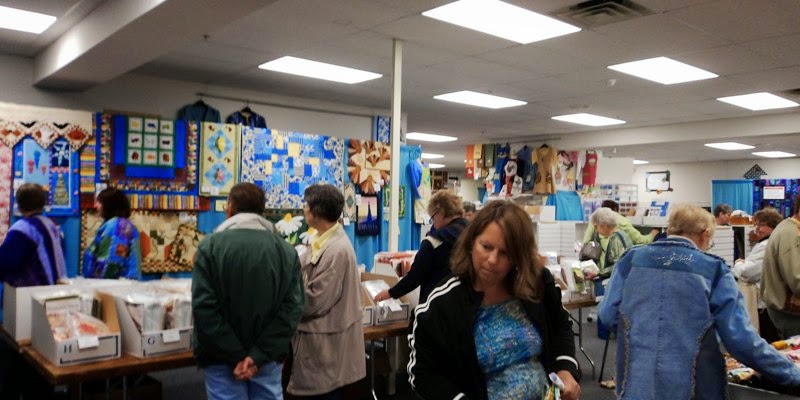 (I think I blogged last year about the local transportation for Sewing Weekend.  I'm trying to slim down a little -- my purse and TOTE bag, that is! -- in order to get through that bus aisle faster.) 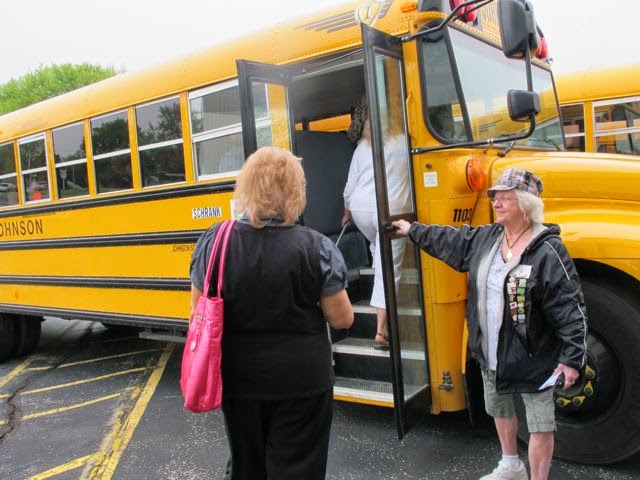 But I digress.   We needed some sewing girl time.  So south we ventured...  I have to say I was a tad bit disappointed in the Schaumburg show, as were my enablers companions.  Not too much variety, and not too much in the way of garment sewing.

Not to fear, I did attend one pants fitting lecture which I liked, and I found some fabric... I was home by dinner time on Saturday and washed my pieces in preparation for some garment sewing this coming week.  Keep your fingers crossed, this year I might even wear something I made to Sewing Weekend!

Posted by Sewing Sue at 2:58 PM No comments: