In my efforts to get some things actually DONE this year, I pulled out the UFO box a couple of weeks ago.  Forgotten, in the bottom, was the top I made at the retreat in Reedsburg.  I can't even remember what year it was, 2013?  2012?  But it was the first time I'd sewn with any amount of batik fabric.

I decided I LOVE batik fabrics!  You can't beat the bright colors.  Most of the time it's so hard to tell right side from wrong side you'd be silly to spend time worrying about it.  It's nice and crisp and most of the time doesn't pull out of shape even when cut on the bias.  What's not to love?

So when my friend Suzi said she wanted to use her new system for pinning quilts, I was quick to jump on that bandwagon.  I agreed to help her demonstrate it to our church group.  She said she'd LOVE to quilt my Almost Twilight top!  Win-win-win!!

She took a photo of the process but I don't have it.  You take four 2X4s, nicely sanded, and place them in a box shape over the backs of four chairs.  Clamp the corners.  Tack the backing of your quilt over the boards and move the chairs to the appropriate size to stretch the backing.  Add the batting and the top and reposition the tacks.

Then you start pinning at the sides, removing tacks and rolling up the boards as you pin what you can reach. This eliminates back breaking bending over tables and the horrific kneeling on the floor of other methods.

Last night Suzi called me to ask if she could come over and show me something. 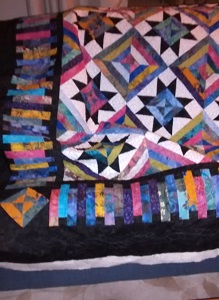 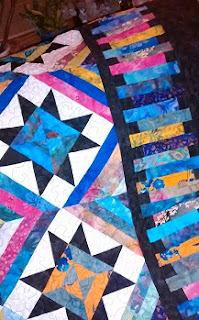 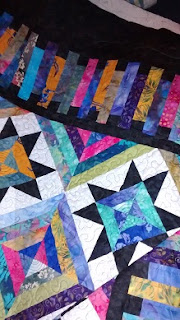 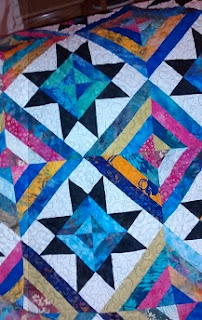 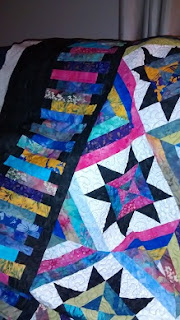 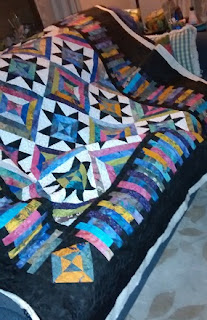 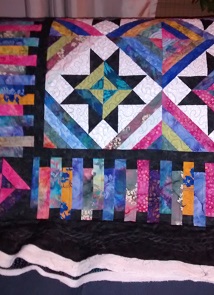 I just can't stop saying WOW!  You can just barely see the quilting in a couple of the white areas, probably because these are cell phone pictures.  We chose a variegated gray thread for the top and charcoal for the back, which is a black batik with spots of purple, teal and some pink.

There are circles - kind of bulls eyes -- in the centers of the stars, meanderings in the backgrounds, straight line echoes in the piano keys and leaves in the black borders.  Not only did she do an awesome job but she did it fast, too!  I think it took us longer to decide on a thread color than it did for the quilting.

Now I have my marching orders.  She told me I can't take another four years to finish the binding!

Over the past weekend I finished two tops and got them pinned.  My friend Suzi helps me do this.  We both go to early church service, so after we have some coffee at the social hour (half hour between services) we adjourn to the back room and pin.

The first was a kit from my local guild.  All of the pieces were supposed to be 5" squares, like charm squares.  Some were, some weren't.  I don't know about you, but in my humble opinion, your tops are only as good as your cutting.

The quilt was supposed to be 9 blocks by 12 blocks, and there were many more in the bag than was required, so I could be choosey.  The squares were all in the blue/purple family with a few tans tossed in for fun, random numbers of pieces I suppose based on whatever there was of the fabric.  Some pieces were one of two, in some cases there were more.

After trimming up the bigger ones and tossing the ones that had shredded to less than 5 inches, and adding a few pieces from my stash, here's what I came up with... random placement but there wasn't enough of some things to make a pattern.

The back is a crazy green and blue zigzag print.  Pretty but I'm not sure it goes...  We'll see. 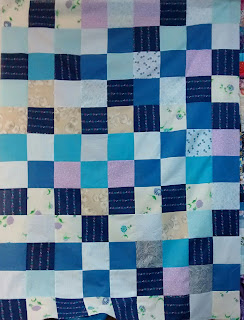 The other one I pinned myself... this one's for church, it's the random 2.5 inch strips bin again: 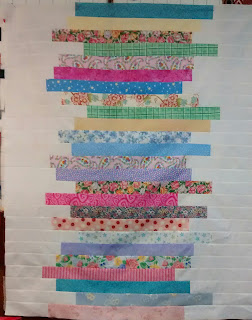 I don't know what the back will be of this one yet.  I have some larger pieces in the tub, I'm thinking maybe that shade of teal that's three strips from the bottom.

I'm going to try my hand at some straight line quilting with the walking foot.  I think I should be able to do two small quilts by the next meetings.  The blue one must be done by August 11 and the pastel by August 21.

Good luck to me!!