My last post about knitting the Christmas stocking showed you the results of the knitting.  I delivered the stocking on Wednesday of last week, just in time for the Thanksgiving reunion of the family for whom it was knitting.

This week my co-worker said the family who saw it was impressed.  Everyone came to his house for the holiday except the family of the little boy for whom the stocking was intended!  His poor mom had some sort of stomach ailment and was throwing up in the car on the way, so they went home again.  Aww... I'm so sorry she was ill, but I'm glad she was wise enough to go home and be comfortable in her own home until she's better.

So when my friend asked what he owed me, I had to say nothing.  No money changed hands.  And the reason is treasure!  Yes, treasure.

Not gold or silver or even jewels.  Gems for sure though.

When his mother stopped being able to follow a pattern to knit, she left a stash of some size.  He had asked me last week if I was interested in any of it.  That's what happens when you are known to be a crafter, people bring you stuff.  Sometimes it's trash, sometimes it's treasure, sometimes it's a mixed bag.

Speaking of bags, there were several of those. 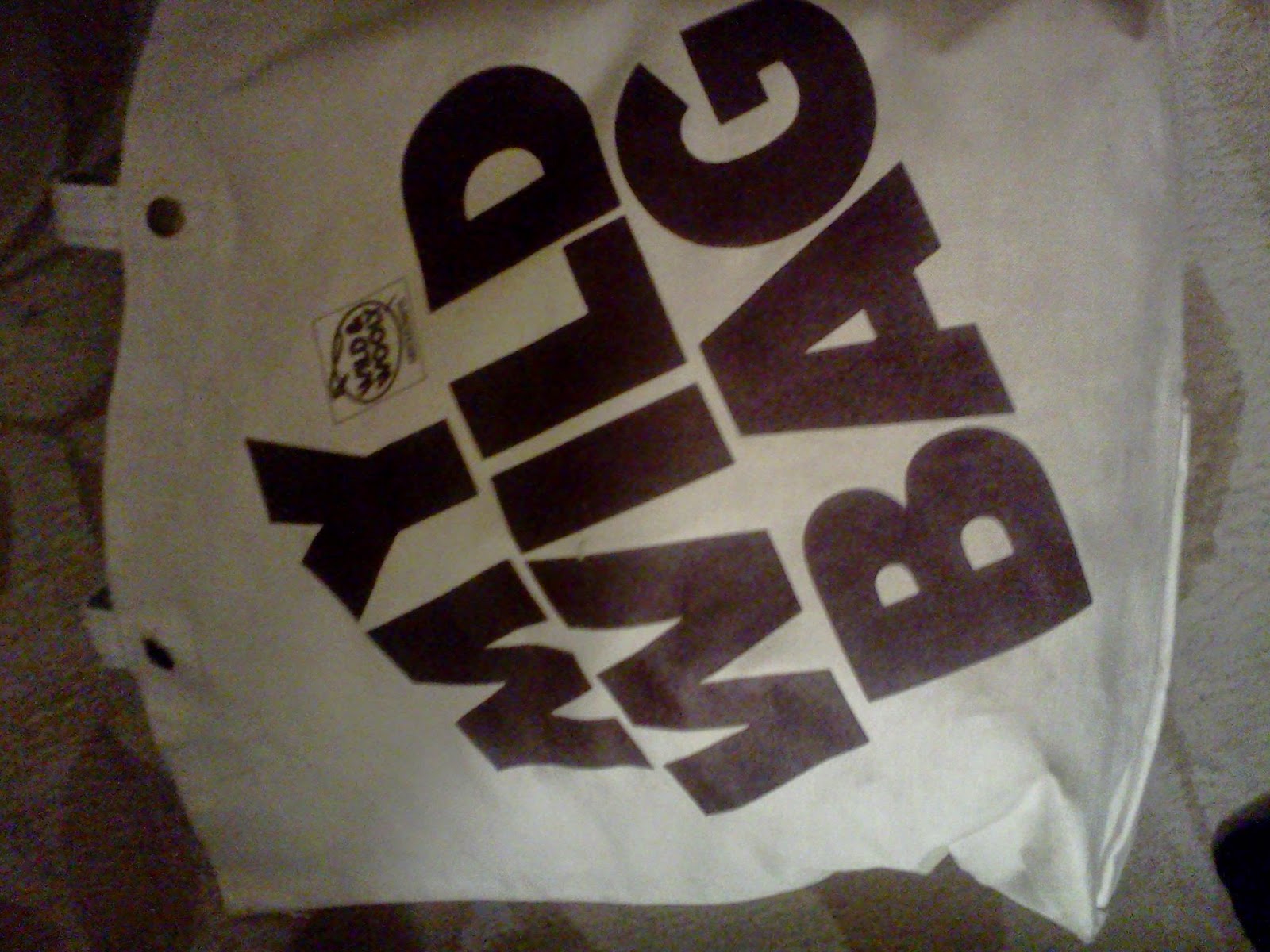 Inside of this bag was a big surprise!
Ruth was evidently quite the knitter.  There were at least six projects that were not finished.  The first one I came across was a rug, knit with Aunt Lydia's Rug Yarn, in blue and white.  Quite patriotic! 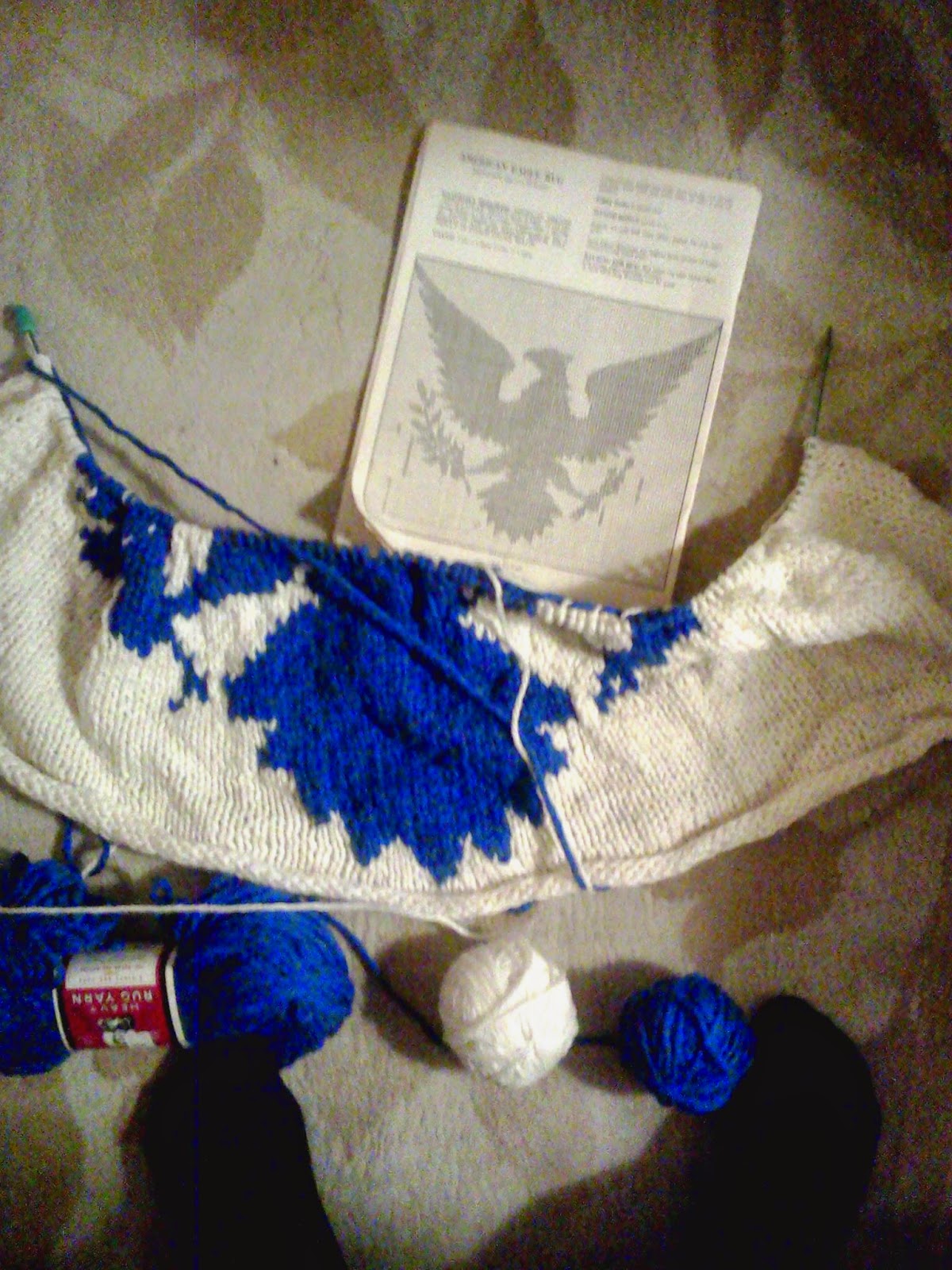 The pattern was in the bag too.  The book it's in is from about 1976.  You know why patriotic themes were popular that year!  (Hint:  anniversary of important date in history... 'nuf said.) 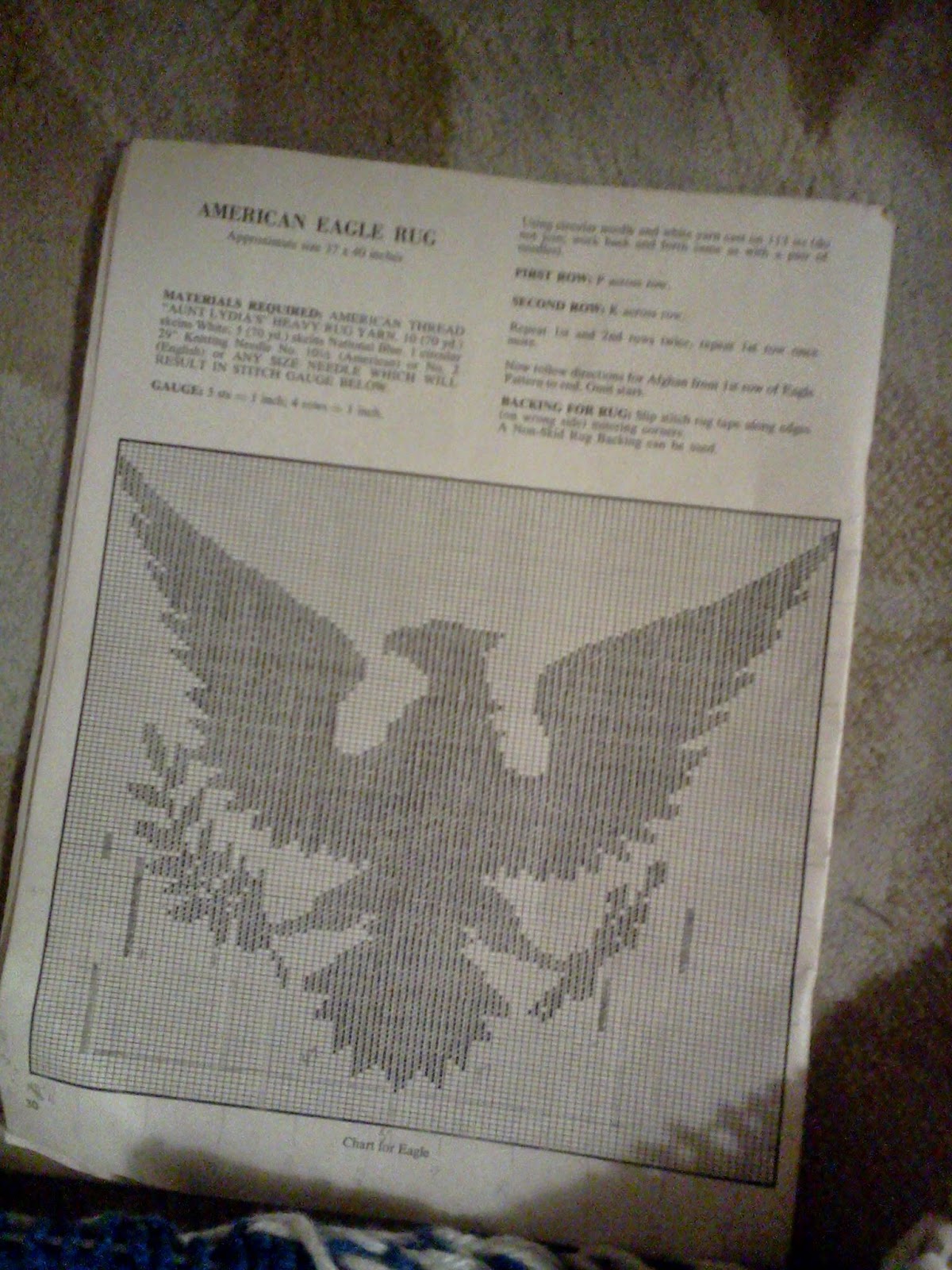 It's only two colors, right?  My daughter, Alex P. Keaton young republican, likes this one very much.  She thinks I should finish it right now. 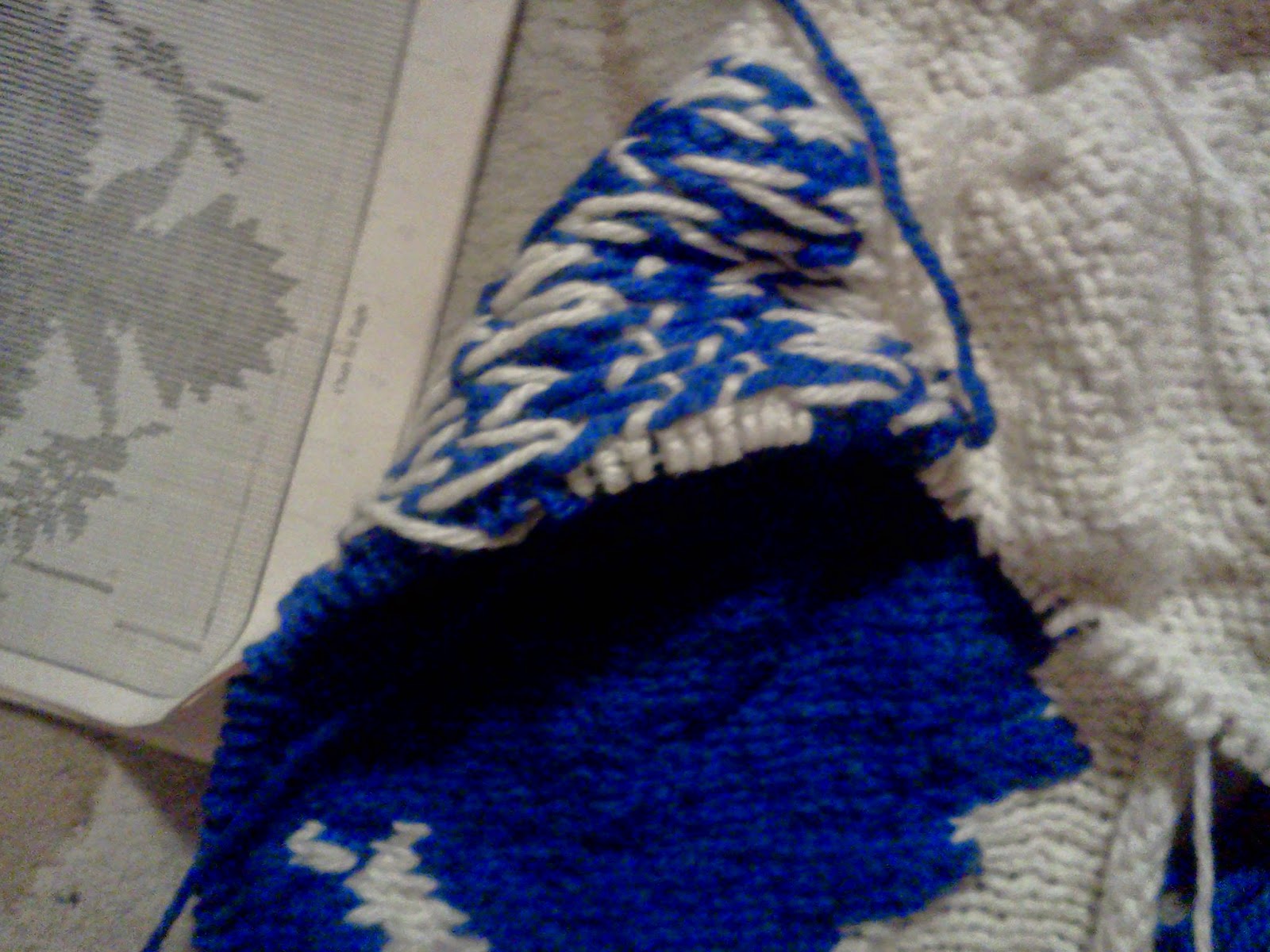 Another project was a blanket with a Raggedy Ann and Andy theme.  This one is knit with sport weight yarn.  For non-knitters, that's skinny.  Think many more stitches per inch than the rug or even the stocking!  Plus all those intricate details!  Ugh, not my thing.  If it's yours, and you think you would like to give it a go, send me an email and I'll gift it to you! 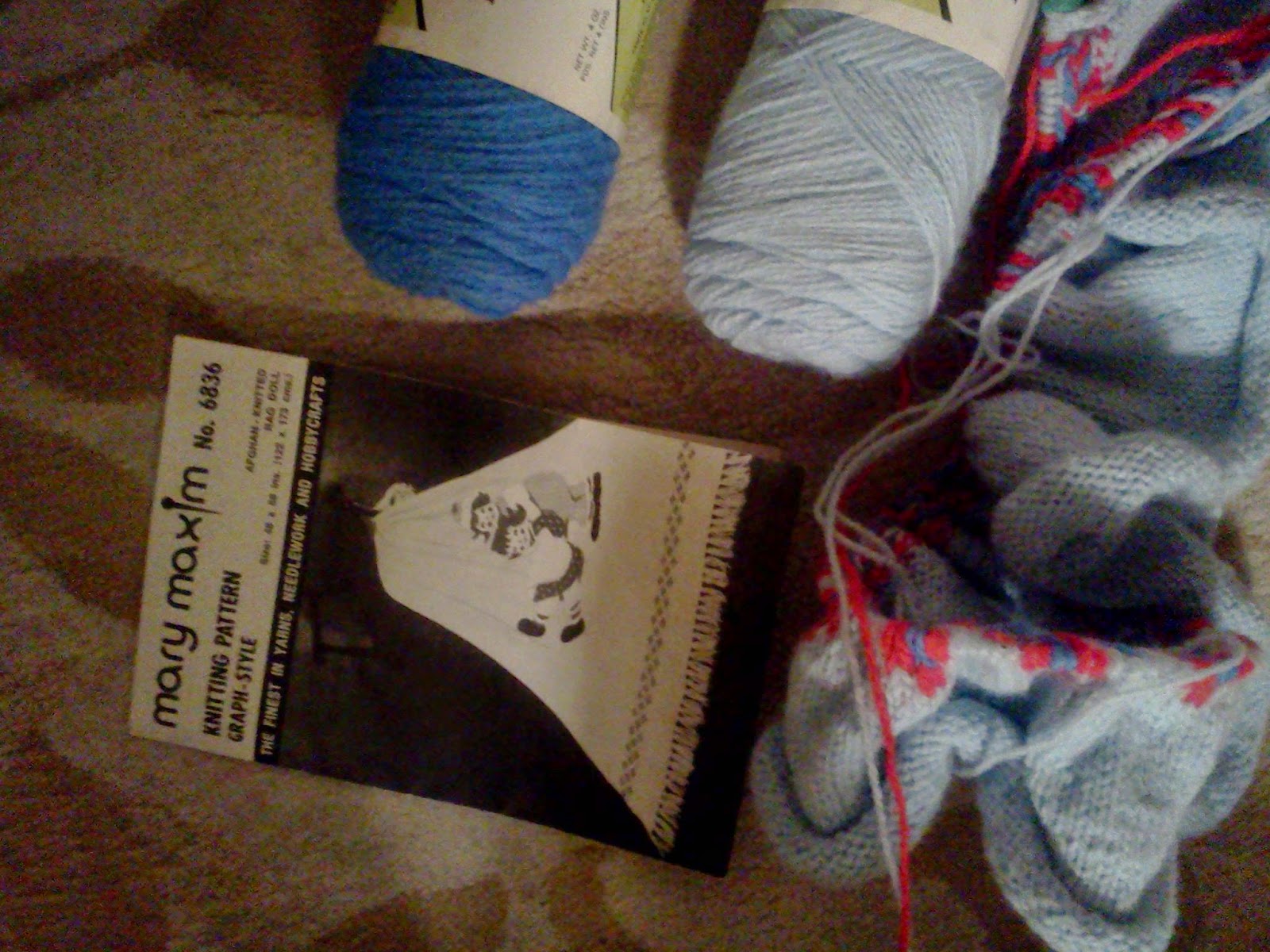 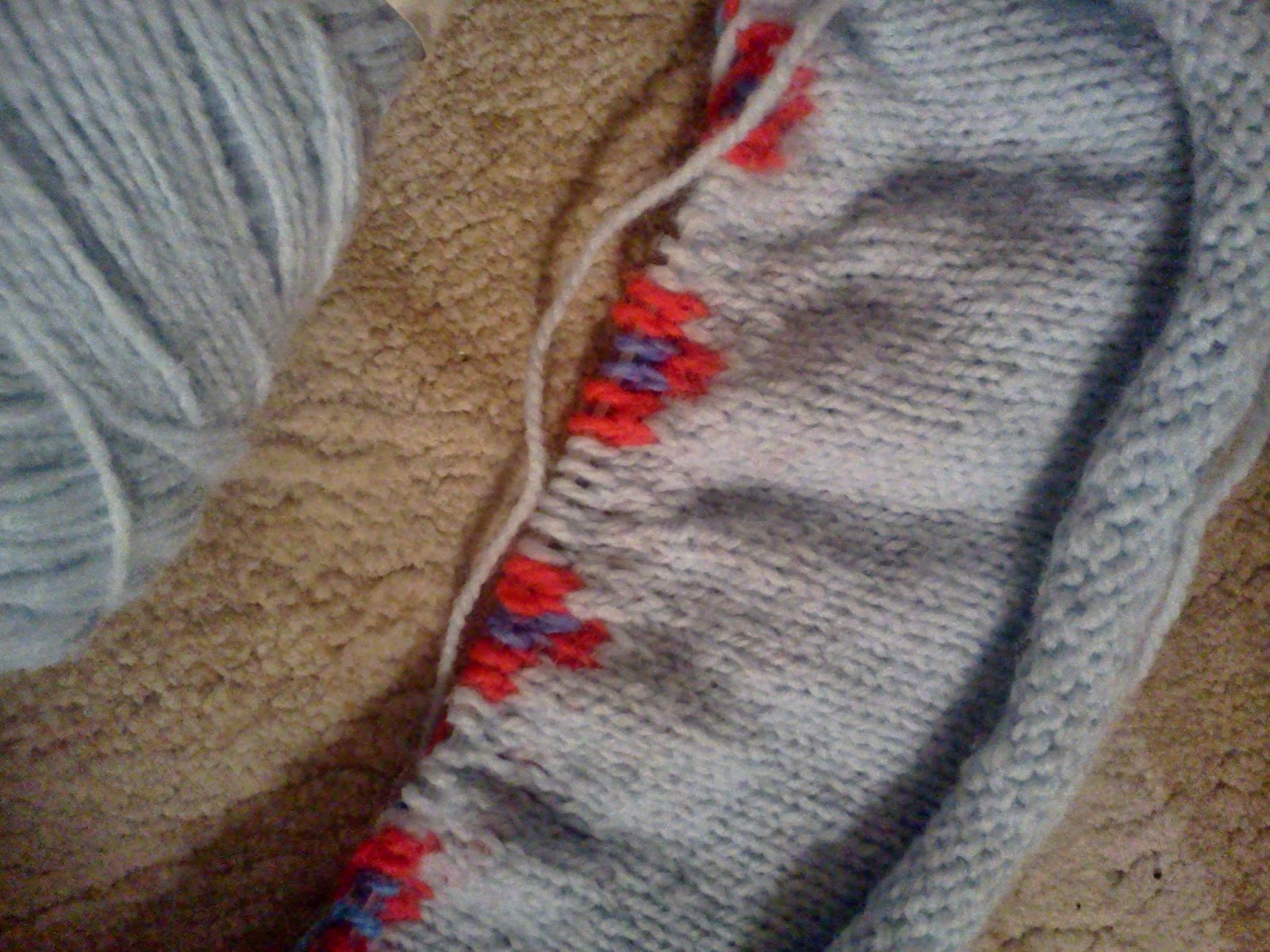 I'll show you more of the stash in another post.  It's been sorted, the bits and scraps have been tossed, the little balls that might be big enough for a doll item have been organized.  A large bag of miscellaneous partial skeins were donated to the preschool at church for projects.  And I feel rich in potential projects!

Of course I now realize that not only do I have my OWN UFOs... I own Ruth's too!