What's On The Needles

I've been on call lately to help Miss A with her fourth grade homework.  While I'm listening to her read the problems out loud I'm usually doing some knitting.

(Who knew they were getting these kids into algebra in fourth grade??  If snake A is 36 cm longer than snake B and snake B is 117 cm shorter than snake C, and snake C is 245 cm long, how long are the others? OMG!  And SNAKES!)

I purchased and downloaded a couple of books on doll clothing patterns from Annie's Catalog.  The one book had the most adorable coat on the front page... 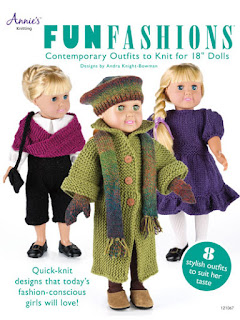 It is all garter stitch, so you knit, knit, and knit and keep knitting.  There's very minor increase/decrease work, so nothing fancy.  I knit one in cream yarn and started another one in a relatively dark green.  My only gripe is that it wants you to use relatively small needles -- fours.  I'm used to doing everything on eights but gauge is gauge.  If you don't believe me go read the Yarn Harlot blog from late last week!

I'd thought to use up some of my small less than a skein balls of yarn, but the coat uses a pretty good amount, something like four to six ounces, which is almost a whole skein depending upon the yarn.

I did have a skein of Debbie Bliss Cashmireno to make the hat/scarf/mittens combo to go with the cream coat.  And let me tell you those mittens are crazy small!  Even so, I ran out of the blue half way through the mittens.  I was making two at a time, like I like to do, and got to the point of splitting for the thumb (yes, a thumb!) and I had to switch back to the cream.  I intended to take a picture but I didn't... I'll post one when the other coat is done.

Here's the close up from the book:


My next project from this book is going to be this one... ballerina!  I found a skein of pink Fun Fur and a pink Caron to match.  I couldn't resist trying the Fun Fur to see whether it looks as impressive as the picture and it does! 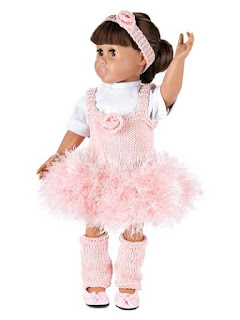 This is project three... I have to check my supply because the pattern calls for number 3 DK weight yarn and I may not have any gray in DK.
So that either requires another color scheme, which would NOT be impossible, or I might have to go to JoAnns' on my way home.  (Oh No!!)  That could be dangerous because I hardly ever get out of there for less than $25.  But I do have coupons!
﻿ 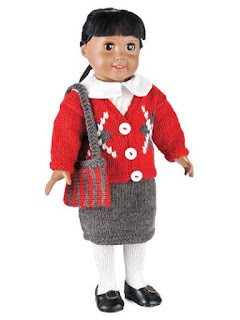 Another Long Weekend Over!

After one week of working from home for a bit and a four day weekend, I have to go back to the salt mines and start chipping away at my pile of things to do.

The quilt top I had begun two months ago for our local guild got done over the weekend.  It's not either of these, although it IS the same pattern...  These are two that were quilted by my friend Suzi for our church guild.  I stitched up the top on the navy and multicolored on, and cut up the kit for the one with the beige borders.

This one was sewn by our ultimate overachiever, Bonnie, and completed after I'd given her more of the beige fabric... seems that I shorted the kit by two WOF strips.

The only other thing I managed to sew all weekend was to hem a pair of my hubby's pants.

One whole day was spent sorting through the books and toys in the guest room, discarding or donating the things that were too babyish for the under-8 crowd.

The impetus for this was that the grands were over on Thanksgiving, and you know how well kids clean up after themselves.  In doing that, I discovered that there had been an inordinate amount of scissors activity on things from the toy box that should probably not be cut.  Trolls and a doll got haircuts and a few stuffed toys were dismembered.  And if you can believe it, tossed back into the toy box that way!

I guess the best you can say about that is that at least they didn't cut each other up...

So scissors are now verboten upstairs and the pool of potential victims has been thinned considerably.  What goes through the mind of a child?  Who can tell... but this just proves to me that anyone under the age of 27 probably still has some mental growing to do, and perhaps many OVER that age too!

A number of large black plastic garbage bags made their way to the Goodwill Donation Center today and that's a good thing.

Someone else's child will surely enjoy the Fisher-Price doll house, farm and that little roller that plays music as you push it around.  I will not miss that!  I don't think you can even buy it anymore... I tried Google-ing to see what it was called and it's not even in the images anymore.  Although there is that think that's supposed to be a lawn mower and makes popping sounds.  THAT was obnoxious too!

All that cleaning led me to feel rather virtuous, but it didn't get a lot of projects finished.