Reflections on the Day

I'm enjoying a little peace and quiet after an afternoon full of grandchildren.  The three smaller ones are 4,5, and 6 years old, and generally speaking they get along and play well together.  Two of them stayed overnight while their parents enjoyed a night out.  The other two live next door.

Miss E was a little put out that she couldn't stay over too, but the three of them together and none of us would have gotten any sleep!

I was thinking about when I was small.  I was telling Miss K about having five brothers who picked on me and made my life miserable sometimes.  This was after her little brother did something, or maybe she was telling me about something he did last week.

My brothers are all younger than I am.  When we were small we were grubby, snotty nosed little kids who fought and played and never sat still.  When we would fight our mom would make us sit together in a chair, and give each other a hug.  This would generally provoke some poking and pushing which turned into laughing, and you can't be mad at someone with whom you are laughing.  Trying to avoid hugging would be so funny we'd forget about being mad. 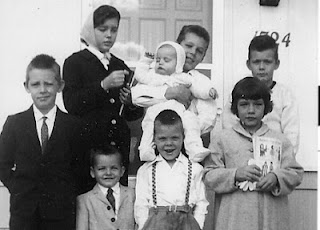 These are the dearest people to me... next to my own kids and grandkids they are the people I would give a kidney to, or send my last dollar if it would help them.

I found out that one of my youngest brothers has an incurable disease that has no treatments, and has had it for seven years. We live half a continent apart, and my brothers are all from the John Wayne school of keep-your-weaknesses-to-yourself. It's devastating to find out that a sibling has something from which they will not recover. What do you do? I'm offering it up, as they say. Tell your troubles to Jesus. Well, Lord, this is a big one!

As I was waiting for the grands to go to sleep, and they were wiggling and giggling and generally NOT going to sleep, I was thinking what a nice day it had been with them.  I don't like to send kids to be hungry.  Or crying.  But they were in need of a little incentive to drop off, so I went in a fourth time and administered a stern warning.  Five minutes later there was only the sound of gentle breathing from their room.

Thank God for every day I get to spend with them. I thank Him also for my fairly decent health, and the fact that I am still employed and that the family is nearby.  I thank Him for the gift of brothers and sisters and cousins and in-laws and other family.  I thank Him that he has ALL of my brothers in his hands... and that He keeps us there.

What doesn't kill you makes you stronger.  Sometimes what does kill you does the same.  None of us gets out of this world alive, but none of us is ready to go right now.  But like Tim McGraw sings, we should all live like we were dying.  Because we are.

Some days there is great happiness, and great sadness, all at the same time.

Good night, wherever you are.  Don't forget to say "I love you".
Posted by Sewing Sue at 9:51 PM No comments:

How much fun can you have with the stuff that's left over when you unpack a box from the UPS man??

Depends on what kind of material it is, I guess... I recently received a box of zippers and thread that I ordered from a place called WAWAK (that's another post, but trust me it was a great experience!) and the box came packed with some cool brown paper with perforations every 18 inches or so.

The day it came, Miss A was visiting and "doing craft stuff".  We opened the box and I naturally started to unfold and smooth out the paper.  At first she was disappointed that there was no bubble wrap.  Popping the bubble wrap is in the union rules for five year olds.

After I smoothed out the paper, she asked if she could have some.  Pulled into sections it suggested to her that it could be colored on, and turned into a mask and wings. 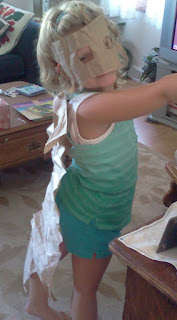 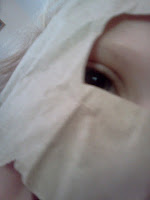 We had to find some 'string' in my yarn basket to tie the mask on, and it took two tries and some assistance from Gramma to get the eye holes right, but she flew around the living room for about half an hour.

Totally worth the effort!! 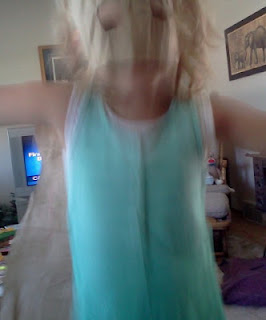 Thanks, WAWAK.  Get your own supply of paper at www.wawak.com and check out their on-line catalog of good stuff.

Keep on Sewing!
Posted by Sewing Sue at 10:46 AM No comments:

On September 21, 1982, at the request of the American Home Sewing & Craft Association, an industry and trade association supporting the sewing and craft industries, President Ronald Reagan, under Proclamation #4976, declared September as National Sewing Month “In recognition of the importance of home sewing to our Nation.”

He subsequently proclaimed the same thing in 1983, 1984, 1985 and 1988.  We don't need more proclamations to tell us that September is the perfect time to sew.  Just like January and April and all the other months of the year!

Still, celebrating sewing is a good thing.  Studies have proven that sewing is relaxing, therapeutic and good for the soul.

The web site http://www.nationalsewingmonth.org/ is a great place to check out the celebration.  There is a contest you can enter, and free promotional materials if you're a shop owner or business.  You can also find them on Facebook.

The sewing machine itself is only about 160 to 175 years old, but boy has it made progress in the last couple of decades!  I remember my first sewing machine -- the first one I owned, that is.  It was purchased used from a store where I worked part time.  Some lucky woman traded up and I got her old one.  It had cams for different stitches, and the button hole maker was a giant machine that clamped on the shank and required at least two changes to the throat plate.

Nowadays machines have so many bells and whistles you really need the free lessons they give when you buy from a good dealer.

I learned to sew on my grandmother's treadle machine.  I think she thought she was amusing me, keeping me occupied.  Little did either of us know how big a part sewing would play in my life!

So back to National Sewing Month... here are the S&C Alliance's suggestions for you:

Are You A Reader? Or Book TV Viewer?

I love to read, and I love to read good, old fashioned paper books!  I buy books all the time, both new and used.  I've been known to read an entire book in a weekend, or to stay up until the wee hours on a weeknight to finish one I cannot put down.

And don't even get me started on books about sewing and knitting and crafting!  I never met a bookstore or in-the-lobby book sale that I didn't like.  Like the one in our lobby last week Thursday, where I picked up a copy of J.A. Jance's Fatal Error.  I started reading it at lunchtime and finished it up on Friday evening.  It was a page-turner!!

This weekend, while I was knitting a scarf for Miss E, I watched some Book TV on CSpan 2 on cable TV.  For those of you who have never watched, it's normally 48 hours of discussions, lectures, reviews and more about non-fiction books that runs on the network that usually carried live coverage of the US Government during the week.  Yeah, boring but true, Congress has its own network.


On holiday weekends, it will be 72 hours, beginning on Saturday morning at 6 a.m.  I tuned in this weekend.  They were interviewing one of the librarians from the Library of Congress about an exhibit at the library of Books That Shaped America.  And if you don't happen to be in Washington D.C., you can check it out at the LOC website at www.loc.gov/bookfest .

Off I toddled to check out the entire list.  The librarian had talked about a few of them, and why they were chosen.  Somehow I thought there would be more, but there were only 88 books.  But what a bunch of great books!  I discovered that I have heard of most of them, and I have read 28 of them.  Books like Catch-22 and Beloved and Goodnight Moon.

There is a wonderful interactive list that can be sorted by book, author or year, and if you click on the book title it will tell you why the book was selected.  For example, the book Catch-22 by Joseph Heller (maybe you saw the movie) was a satirical treatment of military bureaucracy that made the title a catch phrase for the eternal do-loop.

If you're interested in books of all kinds, there is a Festival Of The Book coming in to the National Mall in Washington D.C. on September 22-23.  I bet it will be televised on Book TV.

Google book festivals, I'll bet there's one near you!