I just finished up two days in Philadelphia for a conference for work.  I was here once about 15 years ago for a convention with the American Sewing Guild.  I remembered the airport when I go there, the baggage area looked familiar so not ALL of the grey cells have lost it! 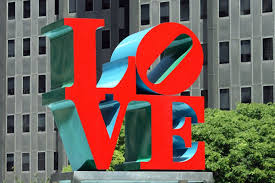 I remembered being in a hotel which I believe was called the Adams Mark.  I remember that the elevators weren't working very well, only about half of the 8 were operating.  There were 800+ women at the conference, and the lines in the bathrooms were unbelievable, so lots of us tried to use the room bathrooms, only to find the lines for the elevators even more unbelievable!

Needless to say, times have changed.  I found out through internet searches that the Mark was sold to Target Corporation in 2005 and demolished in 2006.  I stayed at the downtown Marriott, which is adjacent to the Pennsylvania Convention Center. 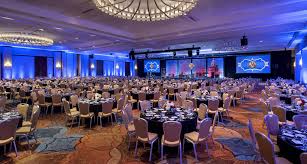 On Sunday night we walked a couple of blocks over to a place called McGillin's Olde Ale House for a  client appreciation event.  The bar bills itself as the 5th oldest in the US.  Their web site says they started serving beer in 1860 and have been pouring it out ever since.  They even survived prohibition.  I didn't ask how they did that!

As the person in charge of registration I didn't see a lot of the place, but the music as loud and the conversation was too.  People seemed to enjoy it. 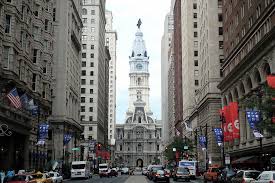 On our walk over we saw the statue of William Penn on City Hall as we crossed blocks.  I think there were tours back in 2000-whatever that took in the historic sites.  I went on an evening walking tour called Liberty Lights or some such thing.  We put on headphones and walked around listening to history read by actors while we saw lights displayed on the buildings.

Last night while walking to McGillin's we went through an alley with bunches of guys standing around smoking and talking, and broken glass on the ground and two dumpsters.  We kept saying "are you sure this is it?"  Gone are the days... 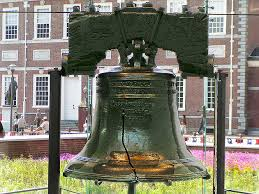 The skyline is great though.  The two shiny buildings in this photo are One Liberty Place and Liberty Two.  They sort of looked Chrysler Building-ish from the air. 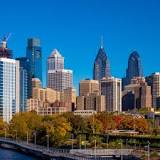 I was right smack dab downtown, like right where this pin is... but it was 95 degrees, and too dang hot for sight-seeing.  The other lady with me wanted to go see the liberty bell.  I said OK you go and tell me how it was because 95 is too hot for this old bag! 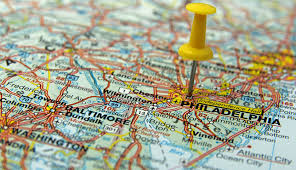 Philadelphia was the birthplace of W.C. Fields.  Other famous people moved here or died here, like Theodor Kosciusko of revolutionary war fame and the guy the high school and park on Milwaukee's south side are named for.

Some that came up in a Google search were Grace Kelly, Marian Anderson, Lionel, Ethel and John Barrymore, Alexander "I'm in charge" Haig, and Legs Diamond.  Also George McClellan and Jack Klugman, and the famous Eds, Bradley and Fisher (OK he was an Eddie). 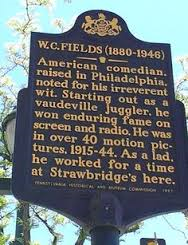 WC Fields was very irreverent about his home town, and was known to quip things like "I spent a week in Philadelphia once, I think it was on a Sunday".  His tombstone epitaph is purported to be "I'd rather be living in Philadelphia".

This week I just found it to be hot.  But then, the inside of one hotel could be just like the inside of another, as long as the elevators are working!

Next, we go back to our regularly schedules programs...