I've been trying to figure out the weather in Wisconsin this spring/summer, but let's face it, it's Wisconsin we're talking about here... if you don't like the weather, just wait a few minutes, it's bound to change.

We had a spate of hot, muggy days, and the air conditioners have been working overtime.  I have the 'corporate sweater' at work, and at home I just fill my lap with some knitting and I'm good.

The lace on the February Lady's Sweater has been making me a little crazy lately, but I finally figured out where my errors were, and I think I have the pattern memorized now. 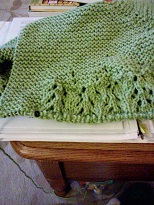 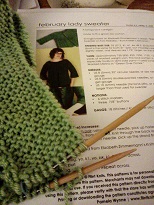 Then there was the error and the frog stitching... 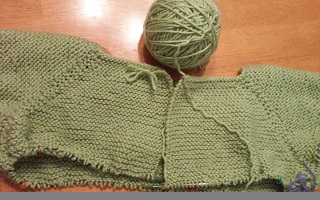 And the restart and the corrected lace...
﻿ 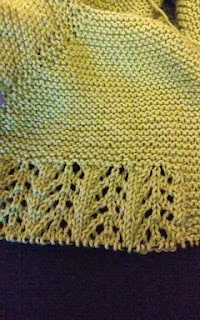 and now we're into real progress: 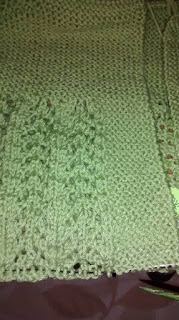 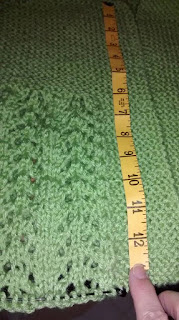 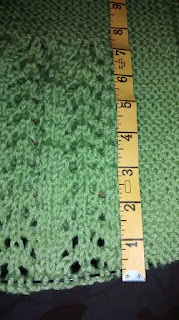 This last group of pictures is from yesterday evening...I've got nearly 8 inches of lace, and of course it's not blocked yet, but I'm almost at waist level!  It's got to go another five or six inches, and then I can start on the sleeves.

My only regret was not putting buttonholes into the right side.  I was so furiously concentrating on the lace and the frogging and the reknitting that I lost track of them.  I'll find a toggle button or two, make loops, and say I planned it that way from the start.  Only my ardent followers will know differently!

I've been trying to finish things up and move them off my list, both at work and at home.  I'm enjoying a bit of success at both places... feeling rather virtuous about the work pile (although it never seems to get any smaller, people keep sneaking things into it), but I'm really excited about the 'home' pile!

While at my aunt's one Friday, I was assigned with my cousin Amy to sort through four large black trash bags of donations from another cousin, who got them maybe from her mother-in-law or grandmother-in-law, I'm not entirely sure.  Non-sewers just classify anything as 'material', so we were unsure of what we would find. 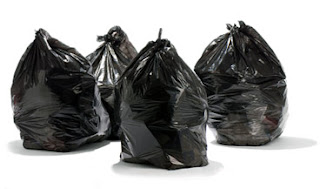 I should have taken a picture of our process but didn't.  We opened the first bag and found things that were suitable for small projects like doll clothes and things that could be used in quilts and a LOT of stuff that just needed to be tossed back in the trash.  We also found many sets of the pieces of raglan tee shirts, kid sized, already cut out and with a piece of ribbing attached.  Those were interesting...

We culled down four bulging bags to two bags, each about half full, one for Amy and one for me.  No one else wanted anything.

I found a set of nine square hemmed cloths, five of which had embroidery on one edge.  No one except I knew what they could be...although some of them made good guesses.  There were also two skeins of floss. 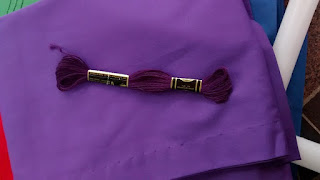 The squares had hand picked hems with beautifully mitered corners.  There were two red, two green, and one white linen embroidered with a three-barred cross, and two purple and two blue with the aforementioned floss. 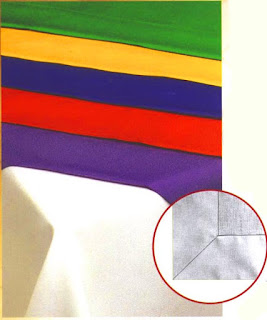 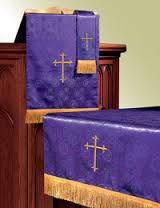 Now they are not quite as fancy as the altar cloths above, but I'm sure they were intended for such a use.  Our church has a preschool with a small altar that is used for both preschool and Sunday School activities, and it only had one cloth, a plain blue one, that is on it all year.  These various colors would be great to use to match the season in church.  I asked the preschool director if she'd use them if they were finished.  She said she would be thrilled to have them, but doesn't embroider.

I do!  Last week Saturday while Miss A was in the pool, I sat at the patio table and worked on them.  I used these plastic q-frames that I had in my resource center.  They hold well and don't mark up the project. 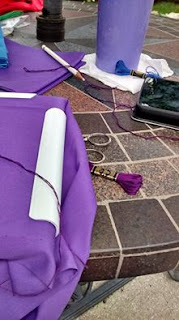 The floss was already provided! 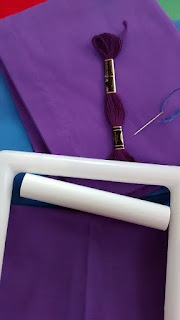 I measured the location and size of the existing crosses on the red cloth, and used a white quilt marker to draw in the lines.  The crosses are four inches in height and width, with about 3/8" between the bars.  The embroidery is a simple running stitch. 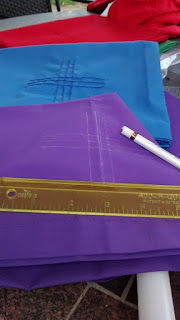 I like this frame, it's easy to hold, even for someone with arthritis, and the sewing went quickly.  I finished up while watching TV on Saturday night, and delivered the package on Sunday morning. 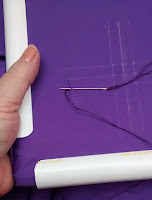 Another UFO crossed off the list, even if it wasn't mine originally!  But I'm still counting it. 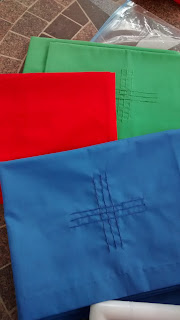 I have never been a fan of pink.

My mom loved pink... loved it to the point that one of the houses we lived in had a pink bathroom!  In a household of 10 where seven of them were male, and there was only ONE bathroom, this was a revolutionary choice. 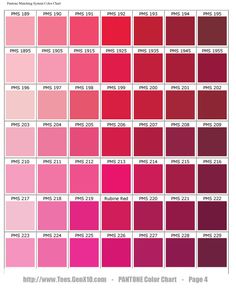 She paired the pink walls, shower curtain and curtains with pink/brown/beige one inch tiles on the floor and chocolate brown rugs.  It was stunning. 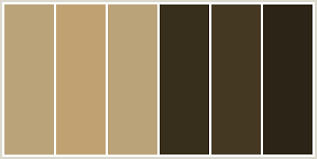 My sister and I shared a room.  Mom wanted to paint it pink, and I wanted to paint it any color but pink.  We compromised with lavender, sister being too small to have an opinion at the time.  I picked out a white chenille bedspread with some pink flowers and all was happy for a time.

My apartment after high school graduation was whatever anyone gave me or I found at the Goodwill.  Who knew from decorating in the 70's?  Everything was psychedelic anyway.

My house is now decorated in neutrals and blues, except for the den which is sage green.  The carpeting is all medium warm beigey-brown.  It's all very restful.  I have splashes of red and green everywhere.  I like to change up the accent colors seasonally, but it needs to remain peaceful on the eyes or I get cranky.

Why the color treatise?  Well, last week, I posted about a scrap project, and it was all PINK.  Mostly because Miss A and I were playing with the scraps. 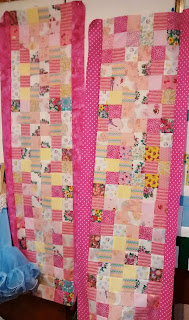 I wanted to make a quilt I saw in either a Modern Quilting magazine or on a website devoted to modern quilting, I can't recall.  The quilt I saw was blue tiny blocks and a gray background.  Very muted, lots of negative space and quilted expertly in the gray.

Enter my very scrappy very bright pink patches, a first attempt at this pattern.  Only now that the panels are done, I needed to find something for the two strips on either side.

Sadly, my pink bin is very small and contains small pieces.  The smaller of the two panels measured 51 inches, so I need about a yard and three eighths.  No luck

Off we go to Joann's.  Miss E and I went on Sunday while the guys were watching a very long golf tournament and the smaller kids were in the pool with Auntie Heather.  I wanted a lighter pink, and Miss E agreed. After several auditions, we decided the solids were just not right.

We ended up with this 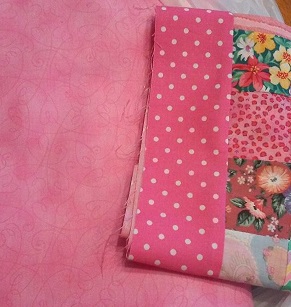 It will be seen as a solid from four feet away, or as my aunties always say "galloping by on a horse".  I will lay it out this week and see what it looks like in real life, and if necessary I can always go to the local quilt shop and look for a better solid color.  This will make a decent back if that happens.

You know it's funny, I don't have any pink clothing except for maybe some pajamas, but I do love pink yarn! 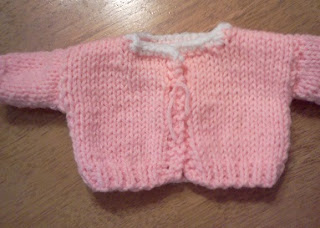 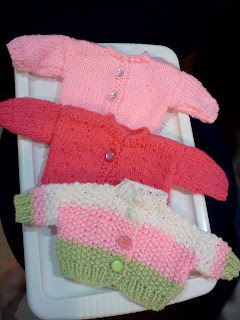