Anyone who's reading this absolutely has to pop over to Rita Farro's blog today and read about a quick jeans repair.  This is one of those things that you see and say "WHY didn't I think of that?"  It's so simple it's beautiful and I have to share it! 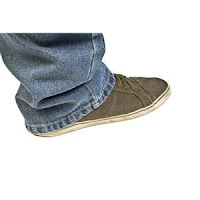 You know the reason your teenager's jeans or your kid's jeans or your OWN jeans get all raggedy at the bottom is because they wear them so long they're over their shoes and the bottoms drag on the ground.  To someone like me who had an actual DRESS CODE in high school and could not wear them just anywhere, this is appalling!  I understand why it happens, just like I understand why it's OK if linen gets wrinkled when you wear it.  But LIKE it, no.

Mind you some of the folks wearing these raggedy jeans like the way they look.  It's a fashion statement, like pierced ears.  Or pierced noses.  So you wont' get everyone to buy into this method of prolonging the life of your pants.  But I am sure that some will.  Husbands, for example.  And it's so simple that even if you don't sew (gasp!!) you can probably find someone who does who will do this for you.

I myself have never worn pants that were long enough to drag over my shoes.  I WISH I could find pants just that length!  Being height-challenged (I claim 5' 2" but I'm actually a little shy of the 2") almost every pair of  pants or jeans I've ever bought has had to be cut off by at least 3-4 inches.  I bought a really nice pair of capris pants last spring.  They were just a tad short of my normal inseam so even they had to be hemmed.

My daughter is about 3 inches taller than I am.  My son and daughter-in-law are both around 6 feet tall.  Even the oldest grand is nearly as tall as I am and she's in grade school.   I think the good Lord intended some of us to stay close to the ground, that's why we're short.  I don't climb too many ladders and I never liked the top bunk anywhere.  So my pants always need to be cut off.  DIL says I should save those bottoms to sew on her pants!!

So jump over to the far right column, find Rita's Sew Fun Blog, and see the quick fix.  You can tell her I sent you.
Posted by Sewing Sue at 10:48 AM No comments:

My blog header admits that my stash is out of control, although I do sew nearly every weekend, and some weekdays.  I have stacks of projects, my room is moderately organized, and I have an inkling of what I own as far as fabric is concerned.  I say inkling because I'm not sure.  Sometimes I open a tub or move something and rediscover something I bought a while back and think WOW, I found a treasure!

I try not to overbuy, but I have a problem... well not just one but that's for another post.  I wrote previously about Goodwill shopping as a young person, that being my source for fabrics when nothing or very little else was available to me.  And all these years later I can still, in a weak moment, remember how it felt to have to make do with what I had when the girls in my class were buying poorboy sweaters in a dozen colors and wool plaid skirts to match.  So now that I can afford to buy nice things (OK not Armani or the like but nice things) I can get a little crazy on a shopping spree.  There, I admit that!

That is why it was so much fun to come across Scrap Therapy the book, and why I'm a fan of Bonnie Hunter at Quiltville.com.  In 2009 Bonnie wrote a blog post titled Scrap Insanity.  She gets it!!  And she has a method for people like me, who can't bear to throw something out, to deal with and USE the scraps.

Now here's the thing about finding cool fabric -- you have it, but if you use it, you could use it up and you wouldn't have any anymore.  So you can use SOME of it, but you have to keep some.  And those little pieces? Well they could be used somewhere, like for paper piecing, or a small project, or doll clothes.  But you can't just toss them. 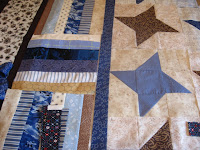 So here I was with two LARGE and several small cardboard boxes full of things I was saving.  Some pieces were big enough for projects, some were the remains of a project, and some were very small.   I've seen lovely jackets made with the strips you cut off of the selvedge edge, so how could I justify tossing perfectly good chunks of fabric?  I had boxes labeled "Barbie pieces" -- probably pieces under 4 inches wide, and boxes for Cabbage Patch and boxes labeled "cut into usable pieces".  This was becoming a problem!

I happened to be in a quilt shop that is now closed and saw a class advertised -- "We're having Scrap Therapy".  Hey, for $15 I'll try it, plus you get a bin and a ruler.  I turned up on time and listened to the teacher talk about this scrap theory.  You cut the scraps into standard sizes, and YOU TOSS THE BITS.  Ahhhhh, can I do this?  I'm a saver by nature.  My grandmother saved the papers from the inside of peanut cans, cleaned them and cut them into curlicue decorations for her Christmas tree.  She taught me how to unwrap a gift without tearing the paper so you could reuse it.

For an hour and a half I cut up the pieces I'd carried to class in my brown paper bag.  I pressed and cut and arranged things in my bin.  When I was done, I had lovely 2 inch, 3.5 inch, and 5 inch squares.  About a shoebox full.  And three patterns that called for a quantity of those sizes of square plus some background fabric. 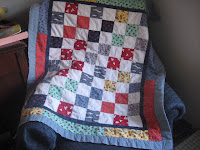 Later I discovered Bonnie Hunter, the woman who rarely tosses anything!  She's got a plan for everything, and she loves to make scrappy quilts.  She saves pieces that are oddly shaped and very small called crumbs.  And she uses them!  Well, now we're on to something.  A reason to save those pieces, permission to do so, and no guilt!

I'd like to report that I have fewer scraps now.  But no.  What I DO have is more organized scraps.  And I don't limit myself to those three sizes of square, although that's the majority of what I've cut.  I have a box of six and a half inch squares, which make lovely applique backgrounds.  I've made three small quilts with those squares with hearts appliqued on some of them.  My youngest granddaughter's favorite quilt is a 'checkerboard' of cool prints and white squares.

Any piece that's width of fabric I cut into 2 inch, 2.5 and 3 inch strips, depending on the size of the chunk.  I have a small box of 2.5 inch squares, and a tub with strips in it that are any size less than an inch wide.  Those make good ribbons and ties for packages and for bundles of other things, and for the garden.  Or you could knit with the narrower ones.  On and on it goes. 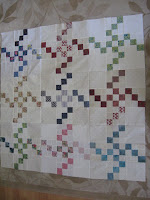 But I do have at least four quilt tops made from various sized pieces.  There's one made entirely of nine-patches consisting of 2 inch squares combined with five inch squares.  There are a couple made with just five inch squares, and one that used the two inch squares sewn diagonally on the five inch squares' opposite corners.
... to those ladies like Bonnie (at Quiltville.com) who made me realize a crumb could be useful, a big THANKS!  And some day I hope to make some of those wacky pieces she makes, using the small drawer of crumbs I'm saving.
Posted by Sewing Sue at 8:15 PM No comments: