Calgon, Take Me Away!

Winter in Wisconsin is always an adventure, and almost always too cold and too long.

Yesterday the temperature in Milwaukee was reportedly 47 degrees F. I couldn't swear to that because I was indoors from 8 a.m. to after 6 p.m. But my desktop gadget was showing 40s, which was amazing. The last time it was above freezing was mid-December!

Today I gave my granddaughter a ride to school. As I was watching the kids get out of cars and walk up to the school, I could not help but notice a small pod of middle school boys wearing SHORTS!!

Yes, winter in Wisconsin does make you a little crazy.

The reality is that when it's warmer, it snows or rains.  We had about 6 inches of new snow on Monday, then yesterday lots of it melted.  So from white and pristine to melted, black and ugly in a day. 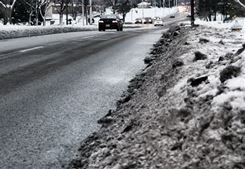 There's a young mom who comes to pick up her kids from Sunday School and she has recently been wearing shoes without socks and a light jacket. I said "oh boy, looking at your feet makes me cold!".

She said "I just can't do it anymore! I can't stand wearing those big winter boots!" (Her kids are always dressed warmly, so since she's an adult and not my daughter, I can sympathize and I don't need to approve or disapprove. But it still makes me cold to look at her bare feet in those shoes!)

I am wearing several layers of clothing today and I'm still chilly... socks, shoes, three layers of tops, and a scarf around my neck and shoulders. Where the heck is a hot flash when you need one???

I started to write this post on February 2, when I first saw the announcement of Nancy Zieman's biography, Seams Unlikely. Nancy Zieman has been my sewing idol (and in my opinion a Sewing Rock Star) since I discovered her program on Public Television in the 1980's.

I don't remember when I started watching, but it was before TIVO and DVDs... I would set up the VCR with a VHS tape to record it because I wasn't home during the time it was on, and I would watch it later, marveling that someone was making a television program to teach home seamstresses as we were known at the time.

At the time, I knew nothing about the industry as it existed then, wasn't aware of any organizations outside of the high school FHA groups and 4H.

If you've read my blog, you know I love to sew, and I love to read. Combining the two seems like heaven to me. In fact, I have several bookshelves in my house that are filled to the brim and overflowing with books and magazines about sewing, quilting, you name the craft and I have it. Many, many of those books are by Nancy Zieman.

Nancy was the first person inducted into the American Sewing Guild Hall of Fame. It's a virtual hall, but there isn't a person I can think of who would make a better inaugural inductee. It set the bar for future hall of famers, in my humble opinion.

I was so lucky to be in the studio audience the day that Public TV in Madison, WI, filmed Nancy's 30th anniversary shows. I was even on screen for about five seconds, in EACH episode no less!! So I guess I've had a taste of my 15 minutes of fame. :-)

I don't have a copy of the book yet, although that will be remedied soon. But you can and should go to the Nancy Zieman blog (link at the right side of this post) to read Nancy's introduction, and click through the blog tour of people in the industry who have commented on her book. Then go get it and read it... really!

I was taking business classes at the local technical college back in the 80's and had to write a paper. I made an appointment with the Nancy's Notions' advertising and publicity manager to discuss how the business started. I drove to Beaver Dam, and Kathy was gracious enough to give me an hour of her time and filled me in on how the company started and grew into a business that at the time was the largest woman-owned business in Wisconsin. So I knew some of the story before the book was published. But it illustrates so well how far back Nancy's business philosophy of sharing with everyone really goes!

I got a B+ on that paper, and if I had added my bibliography it would have been an A. But what I really got from that exercise was a good, solid lesson in how to do well while doing good.

Nancy has lots of admirers, tons of fans, and the loyalty of nearly everyone who has ever met her. And yet, she is the nicest person, so genuine and sweet.

I still want to be like her 'when I grow up'... and we could all take a page from her book. Rock on, Nancy!