Camping - Day and Other Types

When I was a child, one of eight kids in the family, our parents' preferred mode of vacation was camping.  We camped at actual campgrounds near a lake, campgrounds without lakes, and at relatives' homes if they had a back 40 acres.  But that's another post. 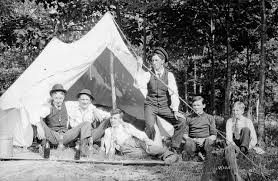 With that many kids, multiple forms of dwelling were required.  Mostly we had a tent and a station wagon.  The parents would toss an old mattress in the station wagon and sleep in that, and the rest of us would be in sleeping bags, with or without air mattresses under them, in the tent.

In order to save on cash the parents bought only four sleeping bags, but you could zip two together for a double sized bag and get three or four small kids into each set.  So the air mattresses would slide apart during the night and we'd end up on the cold, hard ground with only the tent floor and half a sleeping bag between.  And usually a tree root stabbing you in the small of your back.

Also part of the experience was saving money on campsite fees, and therefore yes we WILL take the one farthest from the beach/lodge/toilets.  This made it very dark in the deep dark night, and I as the oldest was the one the little kids looked to for a hand to hold if they needed to use said toilets after lights out.  Because you know the doors to the car were locked.  Even though the tent was not locked.  Any bear in the area would eat us before the parents knew we were goners!  And how far down the road CAN you see with that flashlight???

Is it any wonder that I hated it? 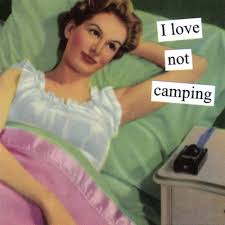 My kids love to camp.  Their experiences were different, they stayed in lodges or camped in the back yard or with the Scouts.  The grands like it too.  I on the other hand consider roughing it to be staying at anything less than a four star hotel. 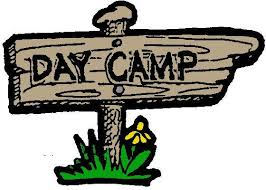 Recently I've been hearing a lot about Day Camp.  It seems like a good idea, doing some outdoor stuff but sleeping in your own bed each night!  I am considering some day camps, though not the Scout kind.

You can jump over to Rita Farro's blog to read about  Grandma Camp.  I do a similar thing for my grands, but this year Gramps is running it because I'm still working during the day.  When I take vacation days we do craft projects and eat picnic lunches outside on the patio.

Yes, within reach of indoor bathrooms! 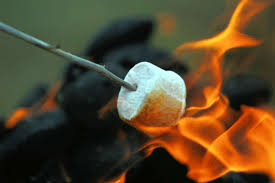 I think I would prefer Glamping.  That was a term used on one of the Project Runway seasons a while back for Camping with Glamour.  Champaign brunch with crystal and silver.  Or at the very least, a tented area to keep the sun off tender skin, say within 50 feet of a permanent building! 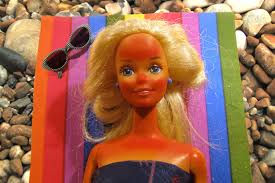 I'm thinking Day Camp for Quilters... maybe four to six people at my house for the day to do a little sewing, a little eating and a little visiting.  Maybe a Knitters Day Camp, to teach a new skill or work on finishing up a project -- doesn't that sound better than a WORKSHOP??  WORKING is such a negative concept sometimes.    How does Quilter's Day Glamp sound?  LOL!

Posted by Sewing Sue at 4:49 PM No comments: 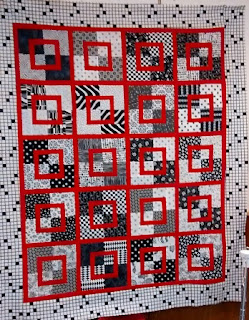 Made a bunch of rectangular blocks from some five inch squares in my parts department.  After much hemming and hawing, I decided I need some borders.  Right now it's kind of an odd size.  Then I need to layer and quilt it. 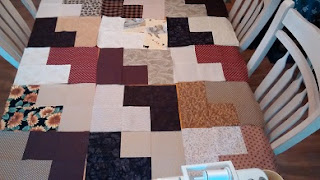 Shopping is in my future with the New York Beauty quilt.  I ran out of the navy, I think I only had a yard to begin with... but I think this one is coming along!  I want to add to the length because right now it's only about 40 inches square.﻿

I better get to it!  I have a McTavishing class in mid-August.  I'm hoping that it helps me find my quilting muse.
Sew on!﻿

Posted by Sewing Sue at 3:59 PM No comments: