In January there was a blog hop at Nancy Zieman's place, all about the new templates she designed for making tablet keepers or iPad or Kindle covers.  The templates make three sizes.  About 20 different designers made a version and every day there was another beautifully executed tablet keeper to see.

Everyone did their own special technique.  Some were quilted, some were bright and others were more muted.  There was painting and there was piecing.  It was pretty amazing.

Here's mine, completed in February.  I found the template set at my local quilt shop.  I bought the hard plastic insert pack too.  I suppose I could have used any stiff material but for the first one I thought I'd do it using the materials specified in the pattern.

For fabric I chose a piece of bright floral with a black background that was left over from a quilt project we worked on at family night.  I originally purchased two yards, then shared it with aunts and cousins, giving almost all of it away.  (Yeah, I know, what was I thinking???)  After my aunt made her quilt with my second donation, I took back the scraps!!  I had about a half yard in various chunks and I was saving it for a special project.  The greens were left from another project... of course I have a huge tub of green fabric, it's my go-to color.


You're supposed to use a flat hair band for the 'grippers'.  I was doing this late on a Saturday night so the only thing I found in my resource center was a box of round pony tail holders.  Cut apart they only provided enough length for one corner, thus different colors.  I also discovered that they ROLL when you sew them!  So the bottom left corner of my Kinldle is always slipping its moorings.  I added a small pad of paper and a pencil holder.  It closes with a magnetic snap.

It's one of a kind, I can always spot it when I put it down.  I can easily tell which is mine if there is more than one Kindle on the table.  I do have my Kindle marked with my name and address but I'm sure if I ever lost it, it would be gone forever.  Although you never know, do you?

If you've never tried making a tablet or reader pad, you might want to try the Nancy's Notions template.  (I was NOT paid to endorse this product!!)   I found it easy to use, but I never tried to make one without the template.  I have nothing to which to compare it, so my opinion and a dollar will buy you a cup of coffee somewhere!  The instructions were pretty clear and it was an easy project.

Now DD, DDIL, and DS want one for their reading devices too.  I guess I won't run out of projects!

Keep on sewing!
Posted by Sewing Sue at 4:20 PM No comments:

This weekend, while watching three of the grands, I still managed to add to the SOW-Along six inch squares!  I set up the machine in the kitchen, and for a few minutes they found it fascinating to watch.  Then they went outside to play.

I finished four blocks over the weekend.  Added to five I made since the last Sow-blog and I have nine new ones for a grand total of 15 blocks!  I should have this top finished by 2014... 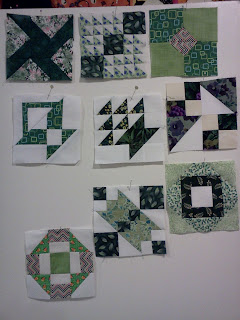 They're all done in greens and white.  I used some of the same fabrics from the first group and some additional fabrics.  I tried to use a variety of background fabrics but I just like the way white looks with green.  A couple of blocks made with other light neutrals just didn't pop for me.

Most of these blocks are six and a quarter inches.  I discovered after blowing through the first six blocks that the blade on my quarter inch foot was bent out slightly, so I was taking too large a seam.  I guess I was too excited to check after the first one, so now I'm trying to be consistently a bit large on the seaming.  I will have to square everything up because I have a number of sizes going from 6.25 to 6.5 and all points between!

The block at the left is paper pieced.  It's the block Bonnie Hunter designed because many of us forgot to put the handle on our basket block!  It was on the drawing but for some reason a lot of us just zoned on that piece.  This is a very nice basket, kind of different.

The block next to it is called Basket of Flowers.  Can you see the small yellow flowers in the print? 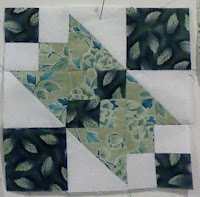 The block in the middle of the third row is called broken sugar bowl.  It has four patch combinations of two kinds and some half square triangles.  I made the first set of HSTs in colors that looked too much alike, so I went back to white.  Then I sewed the block together and you almost completely lose the fact that they ARE half square triangles because they touch the four patches!  But I love the colors of that block. 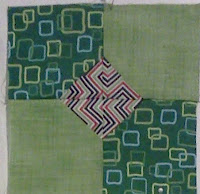 The bow tie block is made with small squares cross-sewn to two different larger squares and then placed diagonally.  I have made bow tie blocks in two other ways, so this was a new one to me.

These colors are kind of 'jazzy'.  I love the darker print.  And I liked what happened when the zig zag print was placed in the center.  I could not have planned that if I had PLANNED that!

These are not necessarily the nice dignified prints of the first couple of squares but if I do enough of a variety it should come together.  Not all greens belong next to each other, but with some sashing to separate the blocks it should blend.

The square I enjoyed the most was the most surprising to me, because it was the one with the smallest pieces.  Seriously, the pieces in Cut Glass Dish are crazy small!!  Those little triangles are one inch finished.  And I was working hard to squeeze 24 of them from a tiny scrap left from a kit I cut up for one of our church charity/baby quilts.  I was really worried because I did not want to make 23 tiny squares and be short one piece... although I suppose the Amish would say that would have been my 'intentional error'.  They say only God is perfect.


Let's see, if you want a queen sized quilt and your squares are six inches finished, you have to do how many blocks???  Even with two inch sashing this is going to be a project for all summer.

If you're 'sowing' along, how are you progressing?

Email ThisBlogThis!Share to TwitterShare to FacebookShare to Pinterest
Labels: Sow Along

How to get through doing the taxes...

Chocolate has always been one of my favorite things.  I could go for weeks without eating a cookie or a donut.  I don't enjoy sweet tea, sugared cereals or things with a ton of frosting.

But I love chocolate!  Chocolate covered anything... well, not ANYthing, but raisins, peanuts, cereal, fruit, pretzels, any other edible dipped in chocolate and I'm right there.

This past weekend I was working on the taxes and trying to figure out what's deductible and what's not, going through the expenses for our 'rental property' - otherwise known as the other half of our townhouse.  DH has saved all the receipts for the past year.  Shoved. in. a. brown. envelope.  Grrrr.

I was getting frustrated.  I was getting a headache.  And a backache.  Oh, wait, I smell CHOCOLATE!!  Hmmm, wonder what it could be?  It was coming from the giant pile of papers near the file cabinet.  I pushed all the papers aside and what was sitting there but the red heart box of candy from Valentine's Day!  I ate one immediately.  Ahhhhh!!  OK, now the frustration was going down as the endorphins kicked in.  OMG did I just eat seven week old candy?

Yes, and I hardly even minded at all.