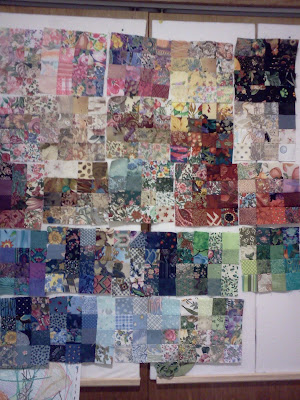 A LOOOONNNNGGG time ago I bought a pack of floral 2 inch squares labeled "Water Color Wonders" with the intent of making a wall hanging of some sort, it was when doing color gradations was all the rage.  The darling grands played with the squares a couple of months ago, 'sorting' and generally playing with the colors, kind of like an I Spy kit.  That brought it out of the drawer at least!  It probably hadn't seen the light of day in many moons.

So as long as they had it sorted, I grabbed it up and while watching my taped reruns of The Gilmore Girls last weekend, I started sewing them into pairs, then into fours, and then into 16 patch blocks.  My intent was to get them sewn together before the fraying got out of control.  But I kind of liked the resulting block combinations.

I think some of the squares are from another batch of cutting, because they don't all have that "kit" feeling, and there are some geometrics mixed in.  I pulled out the obvious mis-matches, like the bright kiddie prints, and added a few cuts from the scrap box.  I still need to final the layout, and taking the photo helped.  When you have that many little pieces, sometimes they stand out more when you snap a picture rather than look at them 'live'.    And I need one more block, so it's back to the 2 inch bin for 16 more squares.

This is not a true charm quilt in process -- I did notice that there are at least two fabrics that have been duplicated, although with different chunks of the prints you don't notice unless you really look closely.

Might get this finished next week, with a couple of extra days off work.  If I can get it quilted, I have a spot in my upstairs hall that is just begging for an art piece!

The Green Thing... and Other Things

While getting my Rita Fix today, I discovered another really wise philosophical position on Being Green... you know, the modern definition of being green, like taking the bus to work or making a compost pile instead of using your garbage disposal.

I believe in the concept of good stewardship of the earth.  I'd much rather take the bus and read, if it wouldn't take me twice as long to get to work.  I pack my lunch four days a week in a reusable lunch bag and take things in reusable containers.

I have reusable mugs for tea.

I grow lettuce and tomatoes in the brief Wisconsin summer, and I shop vegetable stands and farmers' markets when I find them.

I took a carbon footprint test this weekend.  Oh dear, I am afraid that my solo drive to work nearly cancels out the farmers' markets and library card!!  And I forget to take my own grocery bags about 50% of the time.

BUT we USE those plastic bags to dispose of doggie do and cat litter!  And hey, once I even cut the bags into strips and crocheted a reusable tote from them! 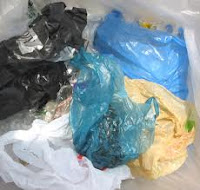 If you want to read a great story about how 'green' we were back in the day, when we were kids (or if you're younger, maybe when your mom was a kid), hop on over to Rita's blog and read the March 26 post here:  http://ritassewfun.blogspot.com/

Another cool blog I've added to my list is by Samina-- who is lately retired?  Am I right, Samina?  She used to work at American Sewing Guild headquarters, and now she's joining us in the bloggosphere with her Sew Everything blog, here:  http://seweverythingblog.wordpress.com/

On this day in history:
If these folks were still alive it would be their birthday:


These people ARE celebrating today!
If today is your birthday, many happy returns of the day!