OK, so my gallbladder surgery is over, no complications, things are fine as far as that goes.  I had a one inch stone, but lucky for me things came out the small incisions, and there were no smaller stones that traveled anywhere!

It's funny, I was sliding onto the table, being introduced to the eight or nine people in the room, Dr. Cutie the anesthesiologist was hooking up the IV tubes, and the next thing I knew I was waking up in recovery.  I had a warm blanket and my nurse was telling me that everything went super well.

Suffice it to say I was home by 2 p.m. day of surgery. I think my discharge may have been hustled up just a bit by the nurse who had to clean up the rather rude ejection of jello and juice from my stomach. Word to the wise: If they try to give you the orange stuff, just pass, OK? And the apple juice -- never my favorite and way too sweet.

When I picked up my packet of stuff to leave the hospital, there was a photo in the folder.  UGH!!  There's a picture of the stone inside me in the packet!  Who thought that THAT was a good idea??  OK, I hear that some folks bring home their kidney stones and make chotchkes out of them.  But why??  Good news for you guys, I am NOT going to publish that any time soon!!

Once home on the couch and resting nicely, I ate a bagel and rested.  I was carefully inspected by the five year old when she got off the bus from school.  "Let me see your tummy, please!  Why do you have all these band aides?"  After deciding that they'd left enough of me to please her just fine, she went off to have a snack with the dinosaurs and Gramps in the kitchen, and I went back to resting.

They don't make big incisions anymore unless they really need to remove something large, but they made a LOT of them.  Everyone who knows me knows I love mysteries and police procedurals and all of the CSI shows.  I remarked that I felt more like a victim of multiple stab wounds than a recovering patient.

So for the past couple of days I have done some catch up homework on a class I'm taking, knitted a few simple scarves on big needles with cool yarn, and read a novel almost all the way through... 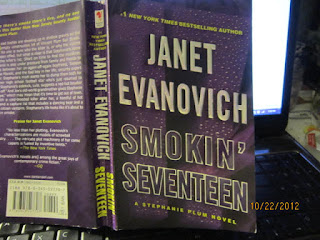 For those of you concerned with Stephanie Plum's well being, she is still losing cars and getting the evil eye from Grandma Bella and having frequent hot s-- well, suffice it to say I have Eighteen and Nineteen waiting on the shelf.

I also received an order from Connie at Stampin' Up with which I will probably make some thank you cards.  My boss send flowers that arrived early on Saturday because the delivery person is in the neighborhood... 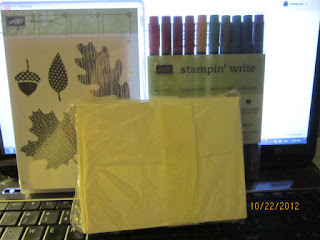 DH raked leaves today, and I'm thinking about some fall themes.  You can pop over to Connie's web page at the right side under Blog Links.  She's very creative, I'm thinking of things I can do from her vast list of projects while I'm housebound!


Meanwhile, I'm retiring to the reading chair with Stephanie #18 and a small supply of Painless Pills, the chocolate variety...  because tomorrow I have to get the sewing machine out to sew on the Daisy and Girl Scout patches. 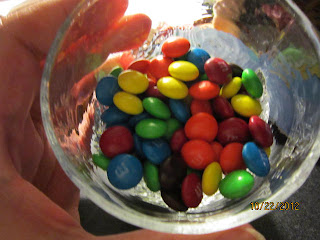