When I Retire I Want To Live In Beaver Dam, Wisconsin!

I tried to figure out when I first attended Sewing Weekend at Nancy's Notions in Beaver Dam, WI.  I have souvenir pins going back to 1996 but I might have gone a year or two before that.  I don't know when they started giving the pins, but I have a big pile... this year's pin was an adorable little red 'beetle' car that looks kind of like a VW. See it in the little announcement for 2017?

This year I agonized over what emphasis to take, quilting or sewing or embroidery or warehouse shows or a mix... what to do, what to do?

I scheduled myself for some sewing, some quilting, and of course, Nancy's class.  Hers had some of everything.  It was a great time.

Sewing:  This was probably Sandra Betzina's last trip to Wisconsin as she says she is retiring next year.  She says she's 75 -- but boy she still can give a class to make your head swim.  Lucky for me I have most of her books so I can hit the index and look up anything that I need.  I ordered her Power Sewing Tool Kit books 1 and 2, because they were mentioned in the seminar, and they were on sale, and looked like a good value.

Nancy showed some of her new McCall's patterns.  One of the jackets was in a reversible knit fabric that she said she got at Joann's.  That was a surprise.  (She said you have to support everyone... she's too nice!)  It was a stripe with a dot, and I really liked it, so I went on line and ordered some.  It was a three yard minimum, but I'm sure I can use it.

Quilting -- I got to meet Mary Fons!!  She is adorable, perky, funny, and she did a great presentation on contrast in quilting.  Boy just when you think you know everything along comes Mary to teach you new tricks.  If you get the chance to see her somewhere do not hesitate... she wrote a wonderful PowerPoint (as you'd expect, because she's first a writer, see her blog Paper Girl.) and one of the slides said "Kill the mango" or something.  It was about three colors she was using to illustrate that contrast is relative, but it broke us up laughing.  Well, we laughed all morning between revelations.

Later in the warehouse Mary was sitting in a booth sewing.  We stopped to chat and while we were talking about the Klutz Glove from Fons & Porter, a nice lady came up with a big bandage on her finger.  She started talking about how the glove would have saved her finger because she lost a huge chunk of it.  Eeeuww!

I started turning green, as did Mary, and I was literally backing away from the conversation... My friend Suzi, who's a nurse, was deep in discussion on the whole thing. Much to my chagrin.  I said to Mary "I have a book signed by your mom and Liz, it would be so great if you signed one for me too".

She graciously agreed and we successfully ended the gory descriptions of the injury.  Thank the Lord!!   And now I have a matched set of autographs, one from Marianne Fons and Liz Porter, and one from Mary Fons.  It's a dynasty... 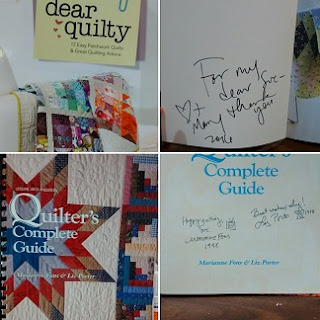 Embroidery - Nancy was showing a new set of tee shirt embroidery patterns that she and Eileen Roche wrote called Simple to Chic T-shirt Remakes.  They were gorgeous.  I would have picked up the DVD but I haven't done the first one they did together and I've had it for two years.  I want to get back to that though.  I really dislike crew neck tees on me.  I always prefer vee neck shirts or a semi-wide scoop neck for myself.  This embroidery software does it perfectly and makes it easy. 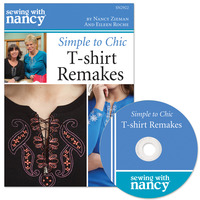 I shopped a bit, but not as much as in years past.  I'm happy with all my purchases and cannot wait for the next nice long weekend so I can unpack and start working on some projects!