I participated in my second craft fair last Saturday and I am happy to say it went very well. I may have gotten over the aversion to doing them! OK, no guarantees, the jury is still out on that one.

The show filled a nearby middle school cafeteria, two gyms and the hallways. Carol and I chose a hallway since we thought the traffic would help her sell her jewelry. As it turns out, the traffic was probably the same in all locations but the booth size was better for us in the hall... except for the crazy neighbor we had it was really good. Why do people dress the way they do to go out in public? Let me say two words: gray sweatpants.


﻿ ﻿ So the show cost me $37.50 in table fee and the gas to drive over to the next town, which was not far. I figured since most of my materials are left over from previous projects, my cost of goods isn't much, it's mostly my time. And since I have to do SOMETHING while sitting with DH who is watching sports or bad TV, it was a good investment. (Yes, most of you know what I'm talking about -- how many golf matches can you stand?? And mine is addicted to Food TV!)

I filled a card table top and three feet of a six foot table with doll outfits, scarves I knit, and some little bags I made last year, the kind you tuck into your purse with a tube of lipstick and your sewing kit inside.

I sold a few things in the morning, but lots of people were looking and not buying. We figured they were scoping out the place and making mental lists. Carol had her earrings and necklaces, some pretty cowl scarves she knitted, and she made a bunch of American Girl doll mitten sets plus some scarves and hats. 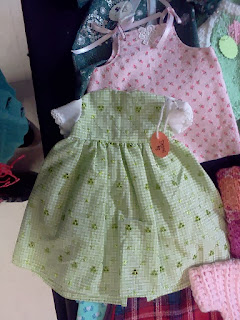 At around noon, the Pompom Squad girls were around with lunch menus and order sheets. Hot dog meals, brat meals and sodas. We chose brats. They were delivered by the same girls a bit later. How cool was that? We tipped them and they giggled like crazy.

Later there were more shoppers, and we sold all the doll mittens, all the knitted doll hats, all the doll sweaters we had, the Packer shirt/pants, and five of the six pairs of pajamas. It's funny, I thought the pjs and slippers would go together, but not all did. The big color at this event was red. Last time it was pink. I guess you never know, do you?


I had some crazy socks that I made from kid socks.  Those did not go.  I should have made white ones, or red ones, or matched them to the dresses and skirts.  I made green to match our purchased Girl Scout outfit and left them on the doll.  Logistical error -- people did NOT like them!

I started out with a sixteen inch by sixteen inch by 14 inch deep basket full of items.  I came back with about 25% of what I took.  I am a happy person!  I also got two inquiries from people who want to commission special items... and several questions about where I will be next.  (We'll see about that!) 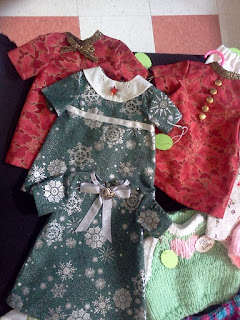 The weirdest thing to me was that these little Christmas dresses didn't sell.  I guess little girls and their moms/grammas were looking for full skirts?  Or maybe long sleeves since it was SO COLD on Saturday!  So these little gems came home with me.

Carol sold two pairs of earrings and two scarves in addition to her mittens.

I hope she will forgive me for doing well...