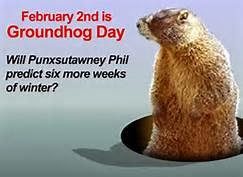 From Wikipedia, I read that according to Groundhog Day organizers, the rodents' forecasts are accurate 75% to 90% of the time. However, a Canadian study for 13 cities in the past 30 to 40 years found that the weather patterns predicted on Groundhog Day were only 37% accurate over that time period—a value not significant compared to the 33% that could occur by chance.

In Wisconsin, if you see a shadow on February 2, it means the sun is out and the temperature is probably low. Counting six weeks from February 2 puts you in the middle of March. 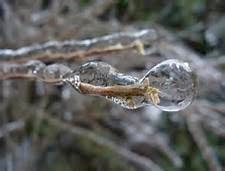 OK, maybe mild winter versus cold winter, but winter none the less.
Sounds like a good time to curl up with a good book, or maybe put that quilt in your lap and do the binding by hand while watching some stuff you recorded on TV, or a good movie on DVD.
Tomorrow our quilt group will be meeting at church to kit things up for the year. Susie B and I sort the fabrics into sets that go together. Then we'll haul out our patterns and see what we can make from each pile. I bring our reusable zipper gallon bags and we get to work. Then the ladies who want to make a top will take a bag and a pattern and bring us back a finished top.
Other ladies take the finished tops and matching backs, sandwich and pin, and pile up for the quilters -- Susie and Barb, but mostly Susie.
Bonnie and Shirley finish bindings, and sew on labels. Then we distribute to whatever charity projects we choose or where the greatest need is.
We also need to do some baby boy quilts for our baptisms.
That's what I'll be doing the day BEFORE Groundhog Day. The afternoon of the actual day I plan to work on a project or two of my own, maybe whittle down the UFO box. I still have plenty of those!
Sew on...
Posted by Sewing Sue at 10:02 AM

The Joy of Winter

Oh the merry joys of winter, especially in the Midwest!

Since the Polar Vortex has been visiting, we've been enjoying below normal to nearly record low temperatures.  Even being near the Big Pond hasn't been the usual insulator.  There's been a lot of below zero wind chill (something I would much rather NOT know about).  Somehow it's so much colder when you hear '25 below' than '1 above', although anything below 60 is unbearable to me lately, so I'm not sure why.

Today, we reached 17 degrees.  Above zero!  It was nearly a heat wave.  I had on so many layers of clothing that it took an extra five minutes to put myself back together every time I had to visit the facilities.

One of the project managers I support 'had' to go to Florida today.  Yeah, I know, poor fella...

He called me from the airport because flights were being cancelled.  Seems that the deicing methods weren't working too well at 6 degrees above zero this morning.  Combine that with delays from other parts of the country and that made four hour delays and overbooked flights the norm.

What could I do?  Not that I was feeling much sympathy for him.  Poor guy...

I booked him a flight out of Chicago instead, and suggested he get his baggage onto the Airport Shuttle, which is a large bus that runs between Milwaukee and the two Chicago airports.  Enjoy the ride, buddy, while I sit in the parking lot tonight waiting for the gauge in my car to move off "C".

Brrrr.  I am thinking about making myself a fleece maxi-skirt and fleece fingerless mittens to wear in my office.

Fleece is not exactly the fashion statement I wish to make at the office this week.  Although I am SO TIRED of being cold or being over-dressed!

I totally get why people become snowbirds.  Hot flashes notwithstanding, winter in the Midwest can be the pits.

Until it snows and the neighborhood looks like a photo from Currier and Ives.  :-)  Then it seems nice, at least while the snow stays clean and unmarked. 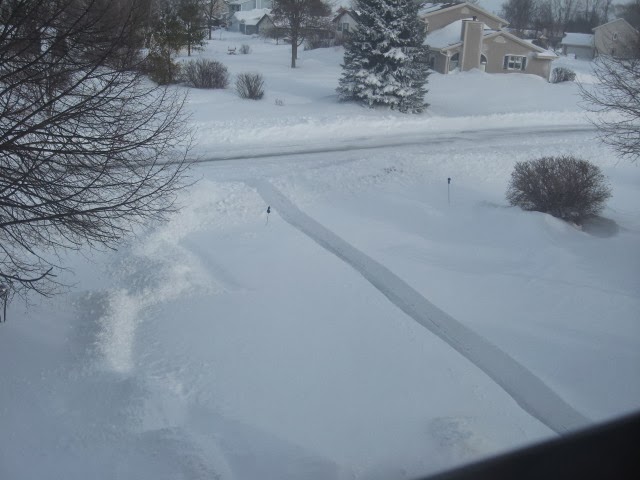 Let's all remember this time when it's August and the very thought of movement makes us perspire.

"Man is a fool, when it's hot he wants it cool.
When it's cool, he wants it hot,
Always wanting what is not."

Grandma, you were so right.