My grands love to watch this show on the cartoon channel that has a cute little girl character who always wants to know "Whatcha doin'?"  She's got the sweetest little voice.

The end of February we went to one of the local shelters and got a cat. 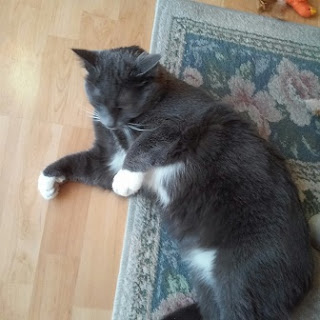 Her name on the cage was "Miss Kitty".  She's about four years old and a little timid, although she's getting braver.  This week she sort of half climbed in my lap, and I can move around under her.  But if DH gets up and his chair makes noise she scampers.
Miss A is the big cat fan, and she and Miss Kitty are getting along pretty well.  I taught Miss A to sit quietly and extend her finger for Miss Kitty to sniff her hand.  Then Miss K generally lets Miss A pet her and brush her for a gradually longer period of time.  Although both Miss A and I have received an unintentional scratch from Miss K's back claws this week we don't think it's intentional.  When she's had enough she uses her back paws to launch off the furniture, so that's natural.  We've each only had to apply one Band-Aid!
Last week Friday I went to the local elementary school for the Third Grade World's Fair.  Miss A was making a presentation on Australia.  Her board included foods eaten there, animals and people who live there, and the flag.  She posed as a tourist, and you can see her backpack in the picture.  She delivered a speech, which we recorded on mom's phone.  She talked so quickly she covered everything in 1 minute and five seconds.  The video sound is bad because of so many people in the gym.  It was very cute, and she got high marks.


I went on a yarn binge...  which of course was JUST what I needed!!  First I placed an order at the Loopy Ewe.  Well, I kind of had to because I had a credit there.  Right?  So I got some sock yarn in some yummy hand dyes and some more Bamboo Pop in spring colors. 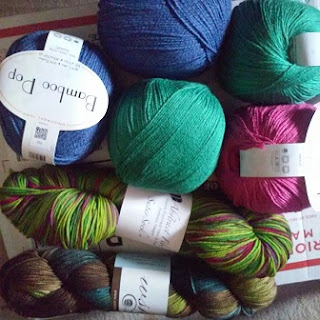 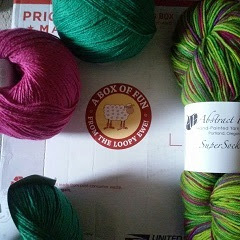 Then just because I could, I stopped on my way from the World's Fair to my aunt's house last Friday and ran in at The Wool and Cotton Company in Greendale.  They had a sale and I found two skeins of pink cotton, plus these four gorgeous hanks of Silky Wool.  Miss A and I wound them into cakes on Saturday while waiting for Miss K to appear.    These are just four of the available colors.﻿ 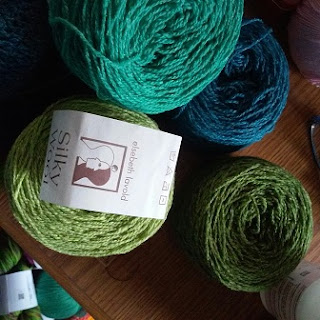 I'm working on a ripple scarf that I hope to turn into a sort of cowl.  I wanted to knit one, but either the pattern was beyond my ability or I was having a complete brain fart the night I began, so I switched to crochet.  That was enough of a challenge for me. 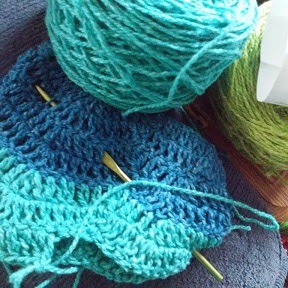 The ladies at the church quilt guild meeting last Saturday were all having the same brain fart issues I was having.  None of us could string two sentences together without issue!  So I guess it was going around.  We were thinking full moon, but as it turns out, it isn't until tomorrow.
Maybe we were early adapters!!
Anyway, we did manage to get some quilt tops sandwiched for quilting.  Here are a few of the things that were shown:

I've actually pinned my Lily quilt, and am preparing to gird my loins and sit down to quilt it myself... wish me luck! 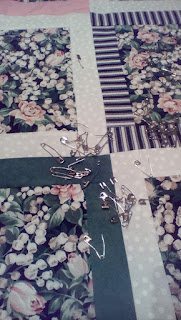