To Quilt or To Sew, Is That a Question??

Yesterday I had a conversation with someone who was looking for someone to sew up a quilt for a class project.  The class is a group of 4 year olds, so they couldn't do it themselves, and no one's mom or grandmom stepped up to to it.   Thus the conversation because it's known that I sew and I just happen to have a grand in the school.

I belong to a chapter of the American Sewing Guild and the quilt group at our church.  I haven't joined the local quilt guild, mainly because they meet on a night that's already committed to something else and they are very interested in entering quilts in shows.

A long time ago while taking a business class I was writing a paper on the home sewing industry.  I did a casual survey of the people in my office at the time, the majority of whom were women.  About 20% had a sewing machine and about 10-15% said they actually knew how to use it and did so regularly.  So I guess it's not surprising that in a group of 16 families, no one would know how to make a quilt.

Do you 'sew' or do you 'quilt'?  I chuckle when I hear this because if you quilt, you are sewing.  I guess 'sewing' - quotes intentional - implies something other than quilting!

Chapters in ASG are made up of people (men AND women) who are interested in all KINDS of sewing, everything from soup to nuts.  I've seen show and tell in every aspect of sewing at one time or another.  Some groups are dedicated to one type of sewing, such as quilts or embroidery, but there's something for everyone.  All are welcome!  (See http://www.asg.org/ if you're interested in finding a group near you.)

I sewed my first quilt about 11 or 12 years ago.  I actually made a blanket of sorts when my DD was small but I don't count that because it was a precut panel, already quilted, and I just sewed a binding on it.

But I've been sewing garments, home dec, accessories and other things since I was 10 years old.  That's right, a LONG time!  I was sewing for my dolls in grade school and for myself by junior high.

There is nothing that's quite as much fun for me as cutting out fabric and watching it become something in the sewing machine and at the ironing board.  I've been known to sew clothes for teddy bears, tea pot cozies, pillow cases and prom gowns.  I have one rule -- the fabric cannot be ugly.  I have a codicil to that rule for quilting fabric, and I've quoted at quilt group -- there is no ugly quilt fabric, there are just ugly combinations.  I heard someone else say if it's ugly you didn't cut it small enough!

So quilters and quote sewers unquote, or sewists, which is a better word than sew-ers, should respect their common ground, and get together sometimes to discuss their mutual passion.  I'll just bet that all of those fabric store owners would cheer that meeting!
Posted by Sewing Sue at 9:01 AM No comments:

Sewing Over the Weekend

Last week Friday was the first time that our 'locals' who attended the February quilt retreat were together.  We compared notes about our various progress (or lack thereof) on the Twisted Bargello we were working on.

I didn't have my camera so I don't yet have pictures of the others' quilts but Amy and Nancy got their tops to the point of needing borders!  Amy of course is a project person and classic over-achiever, and did a queen sized bed quilt while the rest of us are doing wall hangings, and Nancy loves to finish things! 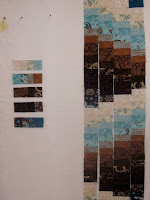 Zel has hers about as far as I do... and Sharon's not telling.

My strip sets are complete, and all the cutting is done.  They are in plastic baggies, waiting for the next time I have a sewing session.

﻿﻿﻿﻿
This is my spectrum, laid out by color and intensity, starting with number 1 on the left and going to 20 on the right.  The colors are great!  They're sewn into sections of four and sub cut. 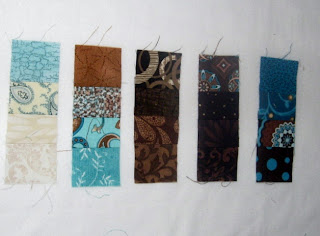 I pinned the sections on my design board, and I'm just loving looking at them.  ﻿Maybe this will inspire a sewing session sometime soon!  Zel, Sharon and I should try to sneak in an extra sewing session to catch up.
This is not a standard bargello where you just sew the strip sets together.  There is movement and color change giving it a "TWIST" in the middle.  The finished project is lovely, so it's back to work!!
Other things I've been doing include our church quilting group's monthly meeting.  The group has made a number of quilts since January.  We chose to sew patterns with half square triangles in them this quarter.  We make quilts to give to each child baptized in our church.  And we have had a lot of baptisms this year, including three sets of twins!!  I'm in charge of choosing color combinations from our stash of fabric and cutting up kits.  I think I pressed out about 50 yards of fabric in my basement in March...
We also sent many charity quilts out, the most recent being 5 to the mission in Ysletta, Mexico.  More will go to Lutheran Womens' Missionary League this summer, and we'll send some on whatever mission trip our congregation goes on this summer.  So we have been busy!
Sewing for someone else, especially to fill a need, is so very satisfying.  Even if you consider yourself a beginner, you can find some project to work on.  Project Linus, Quilts of Valor, LWML, homeless shelters, almost anywhere you look you can find someone who needs what you do.  Or go to the nearest senior home or nursing home and do some mending for the residents.  You'll feel good and be doing a good thing.  Everyone benefits!