Where are they?  Yes, this is Wisconsin, so sometimes a sunny day means the temperature is a bit on the low side.

Yesterday I was working in my home office and we had opened the window, but there was a good stiff breeze blowing and by the time I'd been working for an hour I had added to my wardrobe a pair of socks, a pair of slippers, a sweater and a long sleeved shirt traded out for the short sleeved one I had put on when I got up. 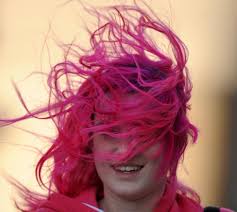 Next week I have to go to Charlotte NC again for one last training session with my successor.  She's doing a great job.  It will be good to be in one room and not on the phone and sharing computer screens.

But it's warm there... last week it was in the 80s.  I'm a Midwestern girl, not used to the balminess of all of that heat and humidity.  Yesterday someone said to me "well at least it's not SOUTH Carolina, it's REALLY hot there!"

Newsflash, it's hot in NC too.  Just because the state is named NORTH, that doesn't mean it's any cooler.  LOL!

Today's tasks are to pick up a piece of wide quilt backing for a project, and also to make some small makeup bags to take out to Charlotte for the ladies with whom I have been working.  That should not take too long, if I can just get down to the sewing room!

My favorite bags to make are the ones in the Mary Mulari book Travel Gear Made Easy.  You can find it here if you want to order a copy:  Mary Mulary's Website

Of course there are many patterns available if you want purses, totes, fancy bags of all sorts.  I find Mary's directions so clear and easy to follow, I rarely venture past what is in that book.

I would post pictures but I've given them all away, except for the ones in my own purse, and they're getting a little shabby. 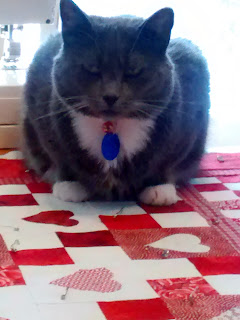 Time to get to work... I'm getting "the look" from the Boss!

For the next two months I'm going to try to take some vacation days before I'm done working for good, at least at the day job.  However, that plan immediately had a monkey wrench tossed into it, and not the good kind...

Well, not a BAD kind either, but you know what they say about the best laid plans, right?  So today is a vacation day, but next Monday I have to go to North Carolina for one more week of training my successor.  I hope it's nice there, and not the 85 degrees they supposedly were having last week.  My boss loves to tease us Midwesterners about how nice it is out there when we're having winter.  :-( 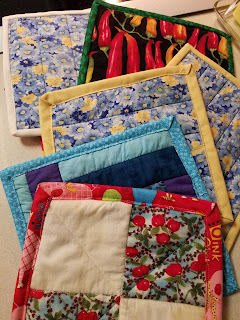 On Saturday evening I went into the sewing room to work on a project.  On the way down I grabbed my potholders to give them a soak in the laundry room.  They were looking a little shabby.  After they washed and dried, and I still hadn't really done any sewing, I decided I'd bind them.  I've been using them for about 15 years but they just had serged edges.  I took out my bin of all those small, leftover pieces of binding that I've been saving and found enough to finish all the edges.  They don't look 'new' but they'll last another 15 years, I hope.  Some of them were pieces of fabric and some were orphan blocks.

I felt very virtuous.  One project done.  Of course it was not on my UFO list, so once again, distracted by 'shiny stuff'...  LOL!

Today the plan was to finish my bookkeeping for April for church, start on May, and maybe make a couple of phone calls.  So the first thing I actually did this morning was drive over to the car place to pick up DH, who had to drop his car off for service.  He could have walked home because it's close but it was raining.

I hope you had a wonderful Mother's Day, either spent some time with your own mom if she's close, or with your kids if you have them.  My mom passed away in 1998 but I have an aunt to whom I am very close, and I wished her happy Mother's Day on Facebook.  She said "that was a nice surprise!"  She has her own kids, but she's such a wonderful person I had to send her that message.

My daughter took me to lunch with her girls.  Well, I drove but she paid...  we went for Chinese which is a favorite of ours but not so much the guys.  They stayed home.  That's fine, it makes a table of four, and we enjoyed the buffet. 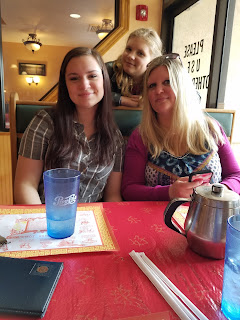 Then we hopped over to GoFresh and had some yummy frozen yogurt.  The girls like to go there
for the toppings I think!  Miss A had so many that I couldn't even see the yogurt. 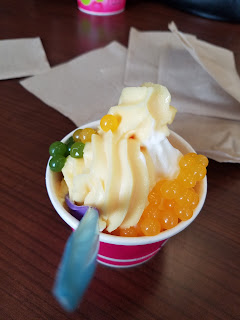 I had vanilla yogurt and mango sorbet.  They had these little beads of juice they called something other than berries but I forget what, and I picked both the mango and the kiwi.  Then we came home just in time for me to take a nice little nap while DH was watching a golf tournament. 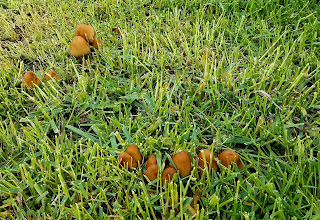 I saw these mushrooms growing in the grass of the church parking lot.  They looked so cute I had to take a picture.  DH says he isn't sure what kind they are but he is not sure they're edible.  I wasted about an hour searching the internet for pictures of mushrooms to try to identify it.  The closest I got was to something called a Glittering Inkpot, which the sites said was edible but it does something gross if you don't eat them almost immediately - they sort of melt down into inky black goo.  Thank you but no.  If I want mushrooms I'll get them from the grocery store!
Here's to a wonderful week!