hu·man be·ing
noun
noun: human being; plural noun: human beings; noun: humanbeing; plural noun: humanbeings
Sometimes I wonder...
The part about the Superior Mental Development, is that optional?
In our culture, we are experiencing the phenomenon called Mean Girls.  There was even a movie by that name.  Now girls are not the only creatures to be mean, by any estimation.  Boys, men, and women are mean.  People are mean to strangers, but sometimes people are the meanest to those whom they are supposed to love.  And there is no shortage of people who verbally abuse small children, the elderly, the kid behind the cash register, the hotel clerk, pets, well you get the picture.
Why??
I know, there is no answer for this.  It was a rhetorical question. I have been hearing stories recently about people who are just unable to be civil to their fellow humans, let alone actually nice.  My mother was a believer in the Golden Rule, you know the one:
Do unto others as you would have them to unto you.  Matthew 7:12
Yes, it's biblical.  The second half of that is 'for this is the law and the prophets'.  Or 'this summarizes the law and the prophets' from another translation.  this means that the Law (the ten commandments) says to do it, and the Prophets have told people what will happen if they don't.
I know judgment will come for everyone someday.  But sometimes someday just isn't soon enough.  People who hurt, maim, shoot, stab, kill other people, yes their day will come.   Some of them might get their dues in this life, but many will not.  It's hard to live knowing that bad people might escape punishment, live high, do whatever they like and get away with it now.
But remember those who say bad things about others, gossip and spread falsehoods, insult others, tease and bully, those people are just as guilty as the ones who physically abuse or murder.  It's just as hurtful to the person to whom it happens.  If you kill me my troubles are over, but if you bully me I live on with the pain.  I don't know which is worse but I have an idea.
George H.W. Bush had it right with his Random Acts of Kindness.  He was pretty clueless about real life a lot of the time, like most rich people are.  He probably has lawyers who could sue anyone who tried to bully him!
So I beg you, be nice to your fellow humans.  My mom was also fond of saying to us "edify"... which means build up.  Again biblical, which I didn't know at the time.  She's say "if you don't have anything nice to say, don't say anything".  1
Corinthians 10:23  "I have the right to do anything," you say--but not everything is beneficial. "I have the right to do anything"--but not everything is constructive.
Dear Lord, help me guard my unruly tongue!  And help me to remember that every dog has his day even when it's obvious that it isn't mine.
Oh, and be especially kind to animals.  Who are sometimes more like the definition of human than are humans!
Peace...
Posted by Sewing Sue at 2:08 PM

On The Knitting Needles

A coworker saw me knitting in the lunchroom one day and asked me if I could knit a Christmas stocking.  I can knit socks, and my 'no' was broken that day, so I said sure, probably!

He's a granddad and his mother had in the past knit stocking for the entire family to hang on the mantle during the holidays, but she has dementia and is no longer able to knit.

He brought in her folder and a picture of all of the stockings she has made, and one actual stocking for me to see.

This is charted knitting, something I hadn't attempted before.  Last night while watching Rizzoli and Isles I thought I'd do a gauge swatch and see whether the letters would look decent.  The child's name is Krewe (pronounced like "crew"), and it's from the family's ancestry somewhere. 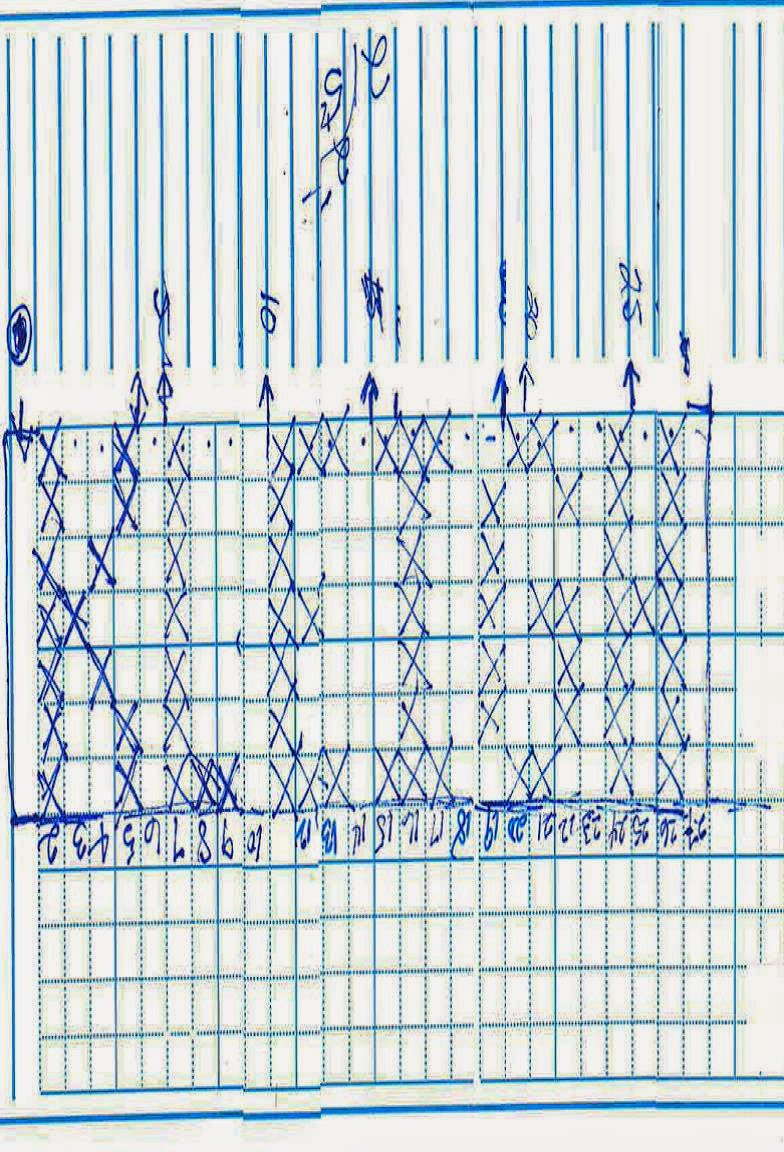 The stocking is 55 stitches wide, folded in half.  So that means you have to fit the letters into half the number of stitches or 27.5.  Leaving at least one stitch on either side and disregarding the half stitch, that leaves 25 stitches for the letters K-L-E-I-G-H.  (Pronounced 'klee').

The chart for the alphabet showed all letters being four stitches wide.  Four times six is 24 plus five spaces between letters is 29.  Too big.  I had to skinny up some of the letters.  K and G didn't work but the rest of the letters did, so I got it down to the proper size, at least on paper.

Of course if you're a knitting, you know that you read the chart upside down in this case because it's a top down pattern.  Mom had actually written out the stitch by stitch instructions to the other names in her folder.  As in "Row 4:  k1r, k2w, k1r" for knit 1 red, knit 2 white, knit 1 red"... etc.  I can totally see why she would have done this!  Once you get into the snowman pattern, this would come in  so handy!

Then there's the whole knitting with two colors thing.  You have to twist the yarns around each other in order not to leave a hole in the knitting.  And don't pull too tight or the letters bunch up, and not too loose or they stretch out resulting in a different kind of hole.  I had to stop at some of the more exciting spots in the TV show during this part!

My gauge appears to be OK, and my letters are even decent. 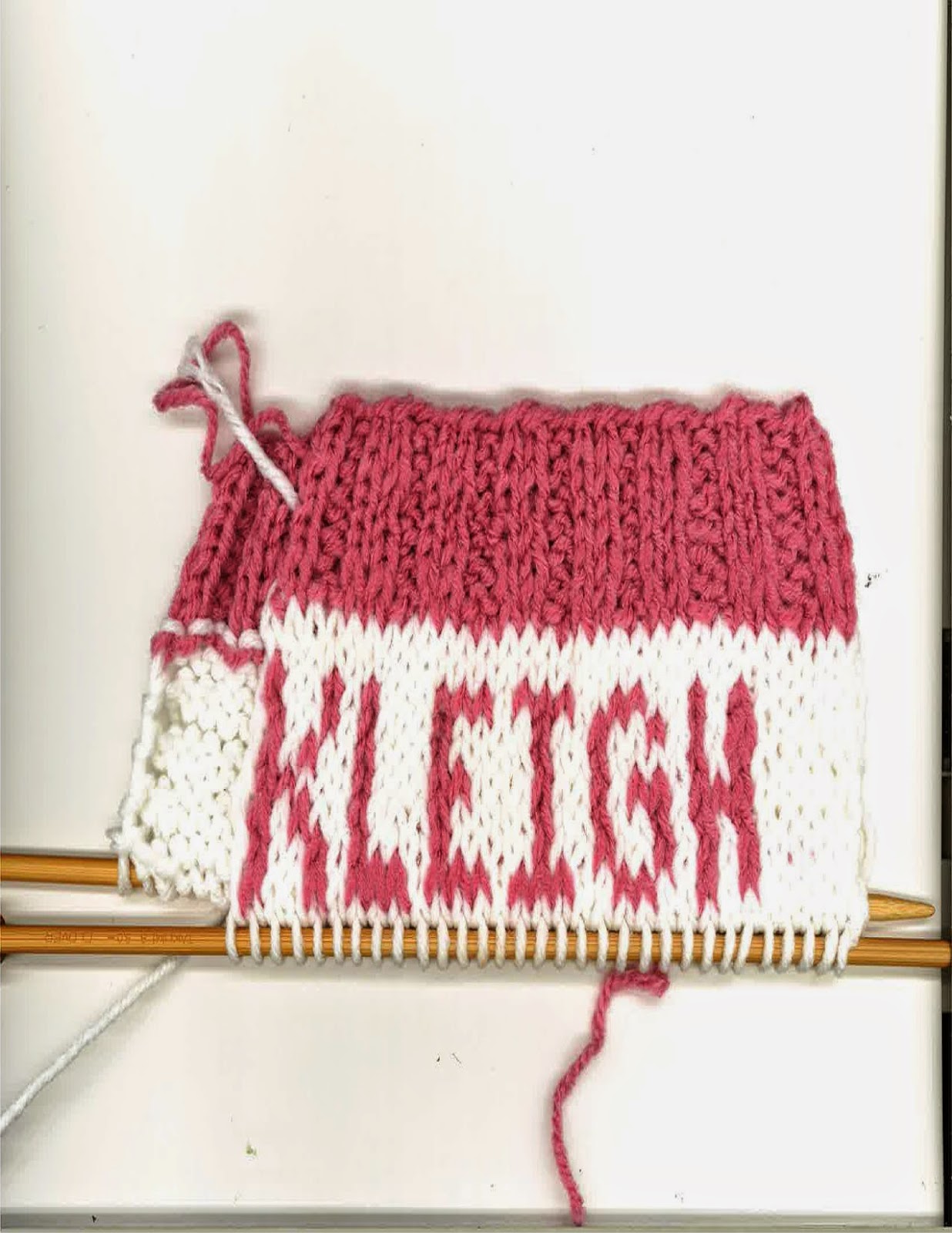 Of course I didn't read the directions completely so I cast on too many stitches (64 instead of 54) so I have overhang, and the name was supposed to be on the OTHER side of the seam, so I'm glad I was using this for gauge instead of it being the real deal, or I'd be ripping it all out and starting over!

All in all, I'm pretty pleased.  Now I just have to buy a skein of blue yarn because of all the colors I have in the stash, that's the one I don't have in sufficient quantity.

Can I knit this before Thanksgiving??  Don't know, but I'm giving it a try!  This much took me most of an hour last night.  No, I'm not showing you the back.  It's not bad, but it's not great.  I hope this gets easier, and I've been watching knitting videos on YouTube.

I've got more projects in the works, a few quilts going, and I cut out some pants for myself last weekend.  It will be a busy summer!

I was cruising some of my favorite places over lunch.  This made me bust out laughing. 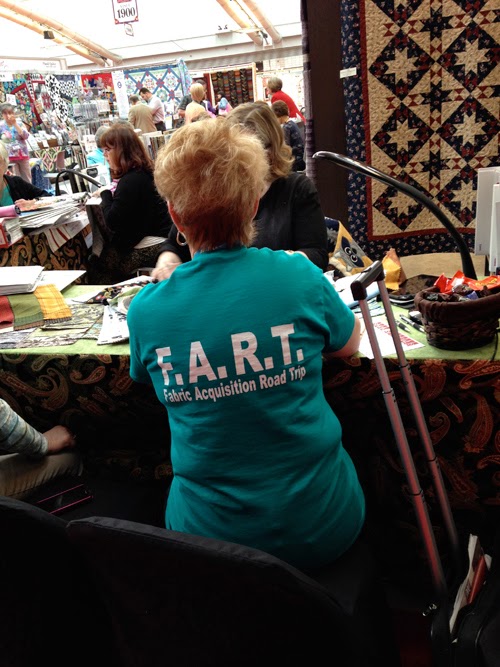 This is how I feel about supporting local merchants and says why I don't shop at Wal-Mart... 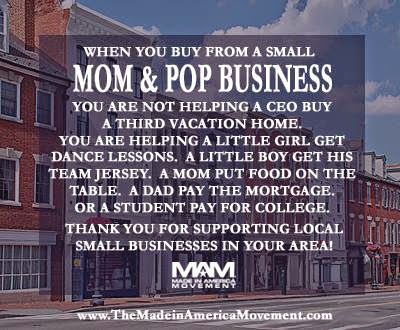 This one is for all my sewing sisters... you know who you are! 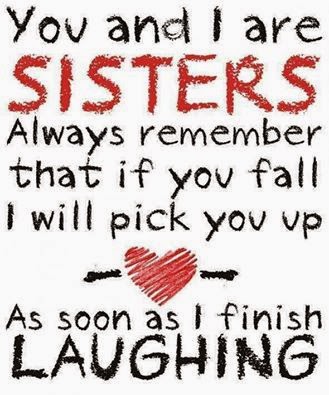 This one is for my hubby: