What kind of sewing machine do you have?
I wish I had a nickel for every time someone asked me that.  Do you get that too?  One of your friends is in search of a first machine, or a new machine, or a fifth machine... I know, right? 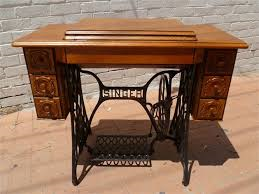 I have seven sewing machines and a serger now.  My big machine and my serger both happen to be Vikings** (see update in my list below), but I also have a Babylock, two Brothers, a Janome and two singers.  I'm not a devotee of any one brand, each one was purchased for a reason except the one I won at Nancy's Notions Sewing Weekend.  That one was FREE and a super big thrill to win. 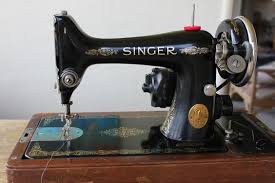 Everyone has an opinion about which machine is best.  They swear that only Pfaff/Janome/Babylock/ Singer/Elna will do and some won't sew on anything else.  My first machine was a White, bought second hand at the hardware store when I was in high school.  I paid $65 for it and it came in a cabinet.  It was a trade-in from a lady who bought a top of the line Something-or-Other machine.  It was my lucky day!
I sewed a lot on that machine.  I made myself a spring coat once.  I made buttonholes with a big bulky attachment with cams for goodness sake, and then I went and bought buttons to fit the holes!  The machine was my bestie until after I was married and my DH bought me a brand new White for Christmas.
My main machine for the past 15+ years has been a Viking Quilt Designer.  I know that because it was two house moves ago.  I got it because I wanted some of the newer (at the time) features.  I got a floor model at a good price.  I sew nearly every week and I got my money's worth! 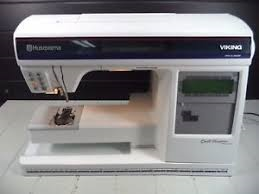 For the past couple of months, she's had issues.  At first the reverse button had to be pushed really hard, then it decided not to work at all.  Backtacking is just second nature, right?  Well when it decided not to work I was irritated.  But I lived with it.
When you buy a machine, you buy a dealer too.  Unless you pick up your machine at some big box store where they're just a delivery agent, you get the dealer with the deal, so to speak.  I look for where I'm going to get service, and shop there.  Buy fabric anywhere and it's the same fabric, but in my humble opinion for a machine, you need a good dealer.
I boxed up the naughty girl and dragged her over to see Dr. Brad at what used to be Frank's Sewing Center.  (Can't get used to the new name...)  He's cleaned her and repaired her more than once.  I'd trust him with my entire stable of machines any time.
When I explained what happened he said that Viking is no longer shipping him parts.  You can google that whole merger/purchase thing and read up if you want to know the whole story.  Bottom line, the only dealership in the area is the big chain store, and to fix it they would ship it somewhere and that would cost a nice chunk of change to replace a $30 part.
Soooo... I asked what kind of trade in value it had.  Well, probably you can guess that -- it doesn't sew in reverse so not a lot. However, everything else works and I like it.  Brad said "hey, come with me"... and we walked over to the corner, where on the floor was a Viking Quilt Designer II with a bag of accessories and a box. 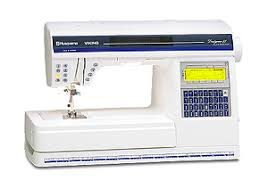 This was a trade in (I seem to like those, remember?) and the price was unbelievably low!  Three little figures... We talked.  The machine is one step up from what I have, a little bit newer, and it sews backwards!!  Plus all the accessories, like cards for additional stitches, at least a dozen presser feet, an extension table...
You know what I did, right?  I did not even think about it. 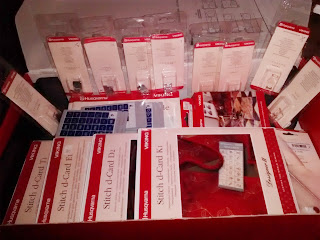 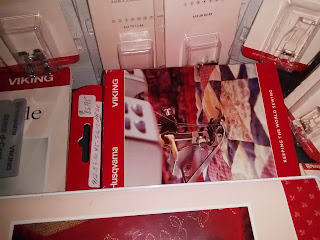 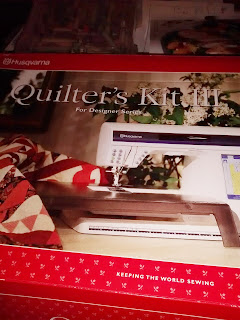 The old one came home with me too... my own personal parts department!  (Worthless as a trade so I'll just keep it.  Hey - it still sews forward, right?)
I guess it was my lucky day.
You may be asking why a person would need all those machines.  Well here's my logic, but you can ask anyone who's got multiple sewing machines and they'll all have their own answer.
See, not excessive at all.. although if I could get my hands on a Singer Featherweight -- oh well, that's a whole other story.  So if I ever do buy a brand new machine, it's a synch that I'll be talking to Brad before I go anywhere else.
It's the dealer, remember?
Sew on...
Posted by Sewing Sue at 3:44 PM No comments:

A couple of weeks ago at my Friday Sewing Night gathering at my aunt's house, Auntie brought out a bag of muslin squares embroidered with big red hears.  She wasn't sure where they came from, she thought maybe from her sister had given them to her.


The squares were sewn in rows of five or ten blocks.  After discussing what we could do it was decided to cut them apart and share them between my aunt and us cousins.  Each one of us would get four and make a table runner or topper, depending upon what kind of table we have.


My aunt had some red yardage as did one of my cousins.  Another cousin was designated to cut the strips from the yardage while the rest of us un-sewed the rows.  Some of the seam rippers were better than others... so there was a discussion about un-sewing.  Our recommendation:  buy a GOOD seam ripper!!


I calculated how much of each border fabric the squares would require, and we were all sent home with a kit.


I missed the next week's sewing night but I did work on my runner.  For holiday stuff, if you procrastinate, sometimes you've missed the holiday and it's hard to re-motivate.


My table is a big rectangle, and I like a long narrow runner down the center.  But when I calculated the amount of border fabric I was figuring on a square, so I was about 25 inches short.


I got the first border on and realized what I had done, so I only sewed the borders on three of the four sides.  Last Friday I went back and showed my incomplete project.  Lucky me, there was a big piece of the inner border left, and all I needed was one two inch strip.  My aunt had her block of four sewn together and was ready to layer it and finish.  One cousin had dropped part of her kit in the drive the previous week and had to be reunited with it, and the other two hadn't started yet.

Saturday brought snow and wind back to us, the perfect weather to stay in and sew.  Plus I had picked up a new sewing machine on Friday and I wanted to give it a test run.  The sewing machine post is for another day.  Let me just say, it was a total score!!

My aunt had suggested that we do a fancy embroidery stitch around the heart.  She had done that and it was really cute.  It was a rather plain block before that, and the hearts were kind of rustic-looking.  I agreed, so I added some fancy stitches through the quilt sandwich to serve double duty - embellishment and quilting all at once. 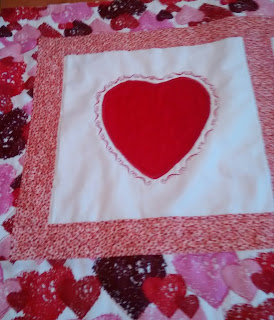 I did some free motion quilting in the borders but decided that my quilting is not good enough for the sections of solid fabric.  Combine a new machine with my inability to warm up to FMQ and all that negative space made me shudder to think of the mess I could have made.  So I quit while I was ahead.


While doing the fancy stitches around the hearts was fun, it was a little stressful too.  For example, doing this design taught me two things:  designs can be directional so this one might have been improved by going around so the scallop framed the heart; and drag matters.  See how the design elongated at the point of the heart?  I should have been making sure it was all supported, because it changed size and messed up the spacing.

I'm sure that if I had been doing that design with a regular presser foot, that would not have happened, but I had the walking foot on the machine, so there was opportunity for the quilt sandwich to slide through too quickly and stretch the design.  Oh well, I was not taking it out.  No. Way.﻿ 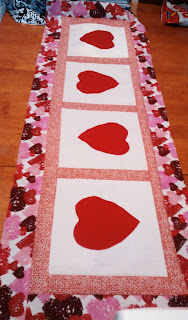 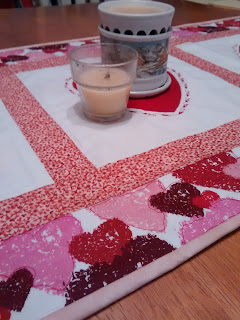 I bound it with some bias binding that has been in my stash for a long time, and now sits on my kitchen table just waiting for the big day!

Regarding the FMQ, I think if I do another piece, I'll experiment with marking the quilting and see whether I enjoy that.

If not, I have a checkbook!

Posted by Sewing Sue at 8:45 PM No comments: