Back to The Blog!

OK All you loyal readers (all six of you!!) I fixed whatever issue I was having with the photos, my life has calmed down a little, and I've resolved to blog more frequently.

We'll see how it goes.

Last month I went to the Wisconsin Public TV Quilt Expo.  That is a great show, and if you haven't attended, you should consider it.  There were over 300 quilts in the main show, plus several smaller exhibits in other areas, including a tribute to Nancy Zieman, another one to Prince's Purple Rain, and some fabulous smaller quilts like Amish with a Twist, and sashiko embroidery.

Then I got a yarn order from Knitpicks, including a new winder.  Not that my old one was broken, but the yarn could slip off the cone and when it wound around the gears it made a maddening mess that could only be removed with a ton of patience, or a scissors.

This new one has a bigger shield and if it slips you get a mess but not in the gears.

I had previously purchased a 'yarn swift' of sorts.  It's from Chiao Gu (I think that's how you spell it) and it holds the hank while you wind, thus eliminating the need for someone to hold the skein while you wind it.  It's perfect!  And it disassembles and goes flat for storage. 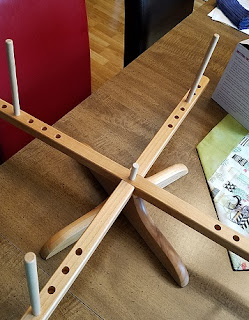 I wound three skeins of sock yarn while watching Midsommer Murders on Friday. 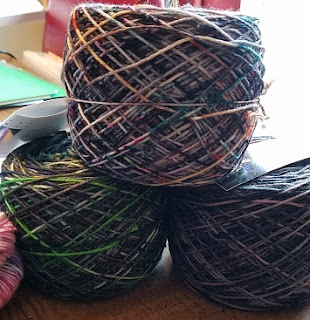 This is the skein on the swift. The wound cake is the photo below. 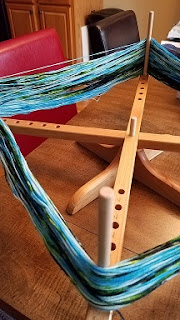 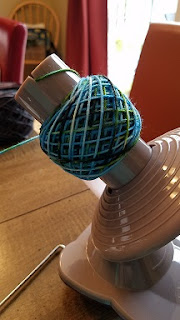 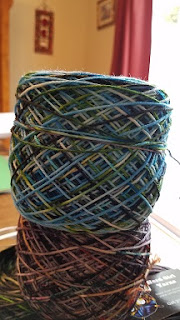 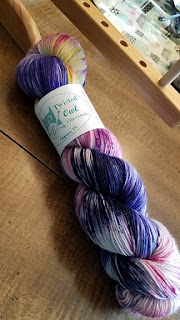 Then draped over the swift. 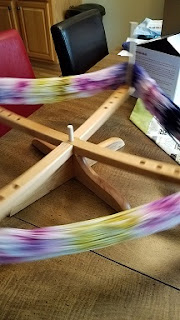 And the cake.  And you won't believe the changes when you begin knitting... 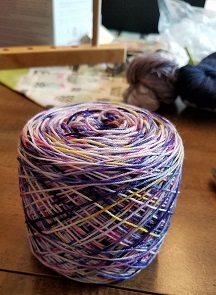 which I haven't done yet.  I have cast on a gray blend called Hawk that is going to be a pair of fingerless mittens for Miss E.  You know high school seniors don't wear mittens, but a pair of fingerless ones will keep hands a little warm and leave fingers free for texting.

On Thursday I was sitting in Starbucks with a tea, knitting between appointments.  A small boy and his mom were watching me knit.  He was whispering to her but I didn't catch what he said.  She finally asked me what I was doing as they were leaving, actually I think she said "What are you making", so probably she recognized it as a knit project.  She said they were nice, so hopefully I get a thumbs up from the teenager too!