I think I've posted about our cat before... a year and a half ago we took Miss A and Miss E to the local shelter and picked out a nice kitty for them to love on while at our house.  They have a dog at theirs. 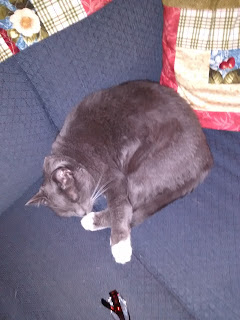 She's pretty calm for the most part, witness the above photo.  She is very vocal, especially around dinner time, and she will run around a bit in the evenings, getting the kinks out so to speak.

The other evening we were sitting and watching the nine o'clock news and she suddenly took off like she was shot out of a cannon!  She was down in the basement and back up and running around like crazy.  Then she calmly walked into the living room and dropped a mouse on the carpeting.  She poked at it a bit, then picked it up again and dropped it a second time.

I guess it didn't move, but DH sure did!  I was knitting, so I kind of saw things out of the corner of my eye, but he said in a loud voice "Oh my God, is that a REAL mouse??"  and a few other comments not fit for this blog.

I guess at first he thought it was her toy mouse, but then he noticed its tail was not the fuzzy cord and there was no label!  He jumped up and went to the broom closet.

She was poking at it again when he brought in the broom and dustpan to pick it up and toss it in the trash.  Personally I'm kind of proud that she's a good mouser!  And also a bit appalled that we have mice in our house!  In our basement!!  With my sewing stuff!!!

Go, Miss Kitty!!  Earn your keep, and terrorize the local mouse population to your hearts content!

Posted by Sewing Sue at 1:51 PM No comments: