Went into the sewing room while DH watched the first Packer preseason football game... and I found some of my pants fabric.  I ran the cut edges through the serger and washed and dried the pieces.

I'm starting with these four fabrics.  Any more than that might result in no sewing actually happening because there are too many choices. 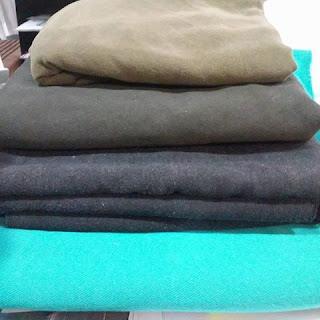 I think I'm going to start with the bottom fabric and work up the pile because I have lots of tops that will coordinate with those two... once I get to the olive, the choices are more limited.

I pulled boxes of patterns but can't locate the one I want.  I found the master pattern but I know I have pieces traced off and folded up in a baggie or envelope somewhere.

If I don't find them, I can always trace off another copy, make the adjustments I know I have to make, and store them somewhat more intuitively this time!  (Like with the master pattern, maybe?  Duh-O!)

Posted by Sewing Sue at 9:52 AM No comments:

Look Changers and Pants That Fit

Years ago I had a VHS tape (remember those) called Look Changers by Judith Rasband.  I had seen her at a seminar at Nancy's Notions Sewing Weekend.  She was teaching people how to coordinate a wardrobe so you could get a million looks from like two and a half pieces of clothing, a purse and a burlap sack.

I exaggerate, but that was the theme.  She made core groupings of things like jeans, a white shirt and a red sweater, then added a jacket, another pair of pants and a scarf, a skirt and a tee shirt.  From this outfit, by changing accessories, you could get anywhere from three to ten outfits and you could look different every day.  Supposedly people would not notice that you wore the same sweater six times. 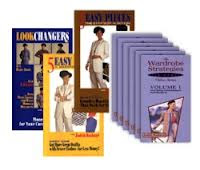 Judith, bless her heart, was a slim woman, maybe a bit larger on the bottom than the top when she stood before us in her black leotard and tank top.  She proceeded to whip things off a clothing rack and put on the outfits she had ﻿organized, one by one.
It was inspiring.
For someone who thinks they look like the third from the left but actually looks more like the second from the right in this little lineup it was also kind of frightening!  How many times have I stood in front of my closet and said things like: 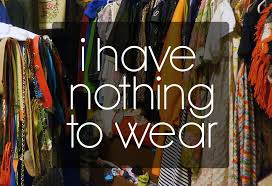 I wanted to know everything about her clothes and have that same kind of closet!  I do (or used to much more frequently than I do now) sew clothing items as well as quilts.  I've been sewing since I was  -- well, a little girl. At 8 or 9 years old, my grandma taught me how to use her treadle sewing machine and I was off and running.
So why do I have nothing to wear??
Actually, I have lots of things to wear but I'm so tired of black and navy pants I could barf!  I know, I know, many of you swear by those two colors, they "go with everything".  But seriously - are you wearing five pairs of black pants, or one pair five days in a row?  Who can tell?
So today I vow to myself and my three faithful followers that I am going to go into my sewing room tonight and pull out that pants pattern.  I spent a lot of money on that pants fitting seminar with Sandra Betzina, and a few more on another seminar with Marta Alto. I know how to make pants that fit like they were made for me because they are.  I'm going to find those dozen fabrics I bought specifically for this task.
I am not going to play with any more shiny stuff until I make at least ONE pair on non-black, non-navy pants that fit.
Fingers crossed...
Sew on!
Posted by Sewing Sue at 10:26 AM No comments:

At last night's quilt guild meeting, we had Schoolhouse Night as we have for several past August meetings.  We had four demonstrators, and five stations, the fifth station being snacks.

I volunteered to demonstrate a small tote bag I made from a kit I'd purchased at the local quilt shop, Patched Works last year.

The bag is small, 2.5" x 2.5" x 6" when made according to the pattern.  Of course you can make it any size, limited only by how large a  zipper you have.  They do have that zipppers on a roll that's about 8 yards long... 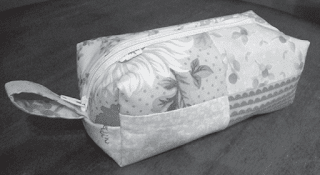 The hardest thing about doing this, besides fitting it in in 15 minutes and talking for an hour and a quarter?  Making step-outs that make sense.  I cut a bunch of kits up, and then started stitching.  The first one I finished.  The second time, I almost did the last step and stopped myself just in time from cutting off something that I wanted to leave on.

Once I numbered the steps for myself it was easier, but not easy.  I just wanted to keep going, and get them all done.

The pattern was in the kit.  It was free from the Moda Bakeshop.  When I made mine, I'd had the kit for about six months.  At that time the pattern was still on the MBS website.  When I went to find it for the class it was still there.  I looked for it today to link to it and could not find it.  It's got a big logo at the top that says Made with Love, and underneath that are the small words "Patchwork Pouch".  Here's a jpeg photo of it. 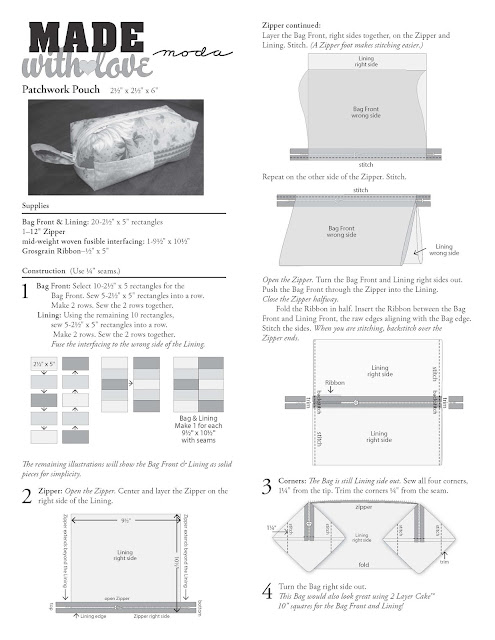 Anyway, the class was fun, every 15 minutes I had to reorganize my step outs (which I numbered and that helped a lot) for a new group of faces.  They all had different ideas about how they could do their own bags and what they'd use them for... I will look for many bags at show and tell in the next couple of months!  By the time the last group came I had the dialog down pat.  And I needed a serious glass of water because my mouth was the Sahara Desert.

Now that Schoolhouse is over, I can finish all my bags...

Knitting in the Beads

Friday afternoon I signed up for a Saturday class at The Wool & Cotton Company in Greendale on beaded bracelets.

I found it at the last minute on Facebook.  My neighbor across the street mentioned that she was attending a sock class on how to knit heels.  I didn't have a sock at the heel point yet, so that was out.  I went to the website and they had this cool bracelet class.  Facebook said there were still open spots.

The pattern had directions to get the beads onto the yarn so that you can see them from front and the back.  A dental floss 'applicator' was included; a length of regular floss attached to a small length of fuzzy floss attached to an end that's kind of like strong fishing line for about 2 inches.  You use the stiff part to pick up the beads.  It's almost like a needle and thread all in one piece.

Twice I tipped over my bead dish.  Don't ask me how many beads I dropped, or how many of those went on the floor...

I also didn't have a size two double pointed needle.  If you don't knit, that is a crazy small size. Think 15-18 stitches PER INCH.  Think knitting on a toothpick!  Not really but it's nuts under some circumstances, like you're going to knit an adult sized sweater in under a decade...  but using sock yarn to make an inch-wide bracelet 8 inches long--that is possible!  I had a size three circular, so I used that.  I made a size large, and it turned out that I could have made a medium with the bigger needle.

The finished bracelet slides to the inside of my arm instead of staying put, probably because instead of using the clasp included, I stitched the two ends together.  It was just the right size without the clasp, slides over my hand without a problem, but the weight of the clasp would have kept it turned the right way.  I may sew in a small button or bead to add weight to the underside - keep it right side out.

I picked a teal kit, since I have a lot of that in my wardrobe.  The beads in the kit were in three packets, a teal matte finish pack, a dark blue shiny finish pack and an assortment of shiny finish beads that included teal, purple, pink and gold. 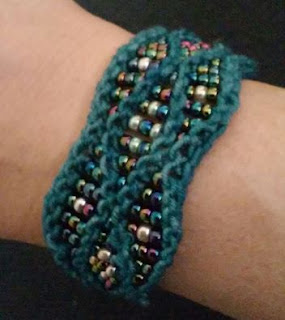 I didn't use any of the matte beads and added some silver ones from my Resource Center.  It just wasn't right with the matte finish, maybe not sparkly enough for me.  And the assorted shiny finish packet had some of the darker blue in it, so basically I didn't use that packet either.  (Dang, leftover beads!  I'll have to make another bracelet...)

I actually knit this same bracelet twice...  I was working on it on Saturday night, and DH said "Are you finished with it yet?"  I said "Oh, yeah, but I pulled it apart and now I started over." 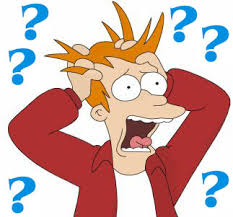 The directions and the teacher said bind off loosely.  Nobody said Cast On Loosely.  So the first time I knit it, there was absolutely NO curve on the cast on edge.  The photo shows the second and final completion.  You can tell that the left edge is less curvy than the right, but at least it's not pulling inward and cutting off my circulation!  The bound off edge is definitely a little looser.

And I have a bone to pick with the shiny beads -- when you see them from the side they are one color, but from the edge they can be a different color.  So you think you picked a pink bead and it's purple, or vice versa!

An actual second bracelet is in process.  I cast on with a bigger needle this time, then switched to the size three needle, and I'm making a size Medium.  Hopefully the edge will curve more than it did the first time.  Practice makes perfect, right?