A Question of Taste, or Not??

My boss knows I sew.  He takes a rather perverse pleasure in telling people about it when I am trying to be a serious business professional, like it's a secret granny thing or something.  BUT he is not above bragging a little too, when someone compliments something I'm wearing and he knows it's something I've made.

His mother sewed garments and quilts, and he has a cousin who is a successful designer and retailer, so I know he values the talent.  And he's not above asking me to do the occasional project and paying good money to get it done, so I cut him a little slack on the teasing.

However, once in a while I question the guy's taste!

Normally he's a rather serious and dignified guy with a dry sense of humor.  But once in a while he surprises me.  He asked if I would know how to take a design someone drew and turn it into an embroidery for a shirt.  His family was having a sports tournament, himself and his sons against his brother and HIS sons, and one of the guys had designed a 'logo'.

I use the term loosely because what was designed could hardly be used as a logo in any modern business.  It was based on the shape of a liquor bottle that had been manufactured in the 1950s, and today would be completely politically incorrect, to coin a term by Bill Maher.

Having purchased some digitizing software, I knew I could do it, but you know, I have rules... like I do not sew on ugly fabric, and I don't do anything in a shoddy manner.  If I can't do something well, I do not do it at all.  OK, yes, type A personality trait.  Guilty as charged!

So when he showed me the logo, and asked me to sew it on a dozen shirts, I had qualms.  BUT and this is a big BUT, the shirts included men's and women's versions.  Thus I must conclude that the women of the family agreed to wear said shirts.  Oh yes, I know the wife and she would not wear it if she didn't want to wear it!

So I sewed the logo onto all the shirts he brought to work, and took the payment cheerfully.  But I made him promise NEVER to tell anyone that I was the one who did the sewing!!  We laughed about it then.  He never did tell anyone in my hearing either.  He sent me a photo of the group wearing their shirts.  They all looked pretty happy.  Of course it was a group picture and the logo could not be clearly seen in the picture.

Somewhere along the line I passed post number 100, and didn't even notice...  I guess I was having too much fun to count! 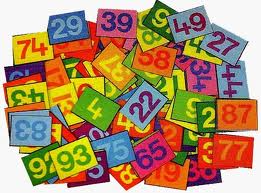 Seems like since our new office move, I should be dressing better.  For too many years I've been working in a basement suite with anywhere from zero to six men as office mates, depending upon the day.  I've been used to wearing pants and a top and maybe a sweater or a jacket for far too long!
I usually get more dressed up on Sundays, but still, mostly pants!  I used to wear skirts and dresses... back before putting on pantyhose seemed like cruel and unusual punishment.
Last week I was organizing my stash, and came across about six yards of this bright floral cotton blend.  Had it been 100% cotton it would have gone into the quilting stash box, but if you're quilting you really don't want to mix blends in unless your fabrics are all prewashed.
So think of the possibilities with this print... might go with blue or aqua or fuchsia, and of course white and black.

I pulled out my trusty OLD Stretch and Sew pattern for straight, four gore and six gore skirts.  This one happens to be four gore.  It has less flair than the six gore.. it probably is very close to an A line but with four seams instead of two.  And with this print, unless I wanted a lot of swing, the seams will be hidden so there was no real reason for going six gore. 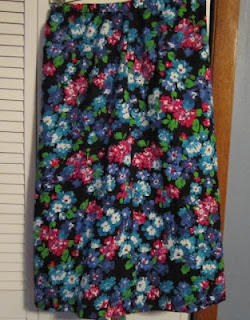 I pulled out the serger, whipped up the seams and clean finished the hem and top edge.  I sewed my favorite no roll 1 1/4 inch elastic into a tube, folded down the top casing and stitched it down using my regular sewing machine and the zipper foot.  Using the zipper foot gets the casing nice and snug.  Even non-rolling elastic benefits from this application.

Then I switched over to the blind hem foot and after pinning up the hem I sewed that on the regular machine too.

Voila!  About an hour later (allowing for pressing the seams and the hem) I added this skirt to my wardrobe.  I didn't think about taking a pic of me wearing it, but after I hung it on the closet door to put away, I took a photo of the sweater I paired it with (minus the white tank top that was under the sweater). 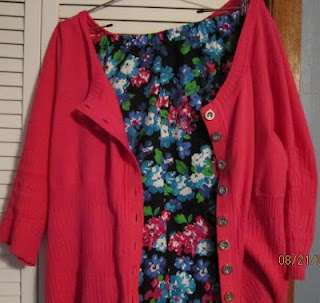 Next time I might try a blue sweater... or maybe I'll see if there is some bright green in the stash somewhere.  I love green!
Sew on!﻿