The 'promotion' ceremony for my oldest Grand, Miss E was last night at the local high school auditorium.  One entire section of seats was reserved for the class.  I don't know how many that was but I'm guessing a couple hundred... rows of maybe ten seats and many rows.  I have a program somewhere, I guess I could check.

Her last name is at the end of the alphabet, so we were pretty long waiting to see her walk across the stage, complete with wedge heels and swishy dress and MAKEUP!!  She is a lovely girl anyway but with some mascara and some lip gloss I thought she looked amazing.  Look out, freshman boys!  Prepare to get your hearts broken...

Her dress was beautiful.  She had picked one out at a local department store, and Mom bought it.  It needed a tuck here and there to fit perfectly, and I did that.  But when she came home from school the following Monday, she had discovered that several other girls had purchased the same dress.

A: Gramma, how much trouble is it to make a dress?
G: Depends on the dress... why?
A: I need a different dress.
G: How different?  What kind of dress?
A: Like the dress I bought, just like that but different.
G: OK... why?
A: Two other girls have the same dress.
G:  Ohhhhh, noooo.
A:  Yes, can you make one just like it but with different fabric?
G:  Sure, let's go shopping...

So we picked up some black crochet-type lace for the top, and the base fabric is satin in the preferred mint green color.  I found some chiffon in a matching green and we were off to the races.

I am lucky that she happens to be a perfect pattern size, requiring no alterations except for the length.  This is the dress hanging on my sewing room wall waiting for a try-on.  I had added a ribbon belt attached where the pink pin is showing.
She looked amazing, and her dress fit her personality to a tee.   I could tell she liked it. 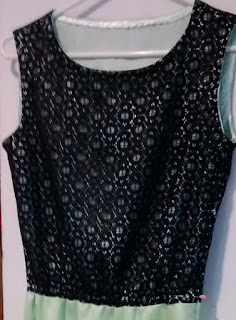 Here's the proud promote -- holding her certificate!  On Tuesday she officially starts her freshman year taking health and phys ed in summer school.  That's because she has a schedule so full of college prep electives that it was the only way to do it.

Looks AND brains and I am not bragging since it's the truth. 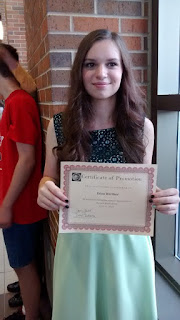 And amazing wedge heels that made her SOOO much taller than me. 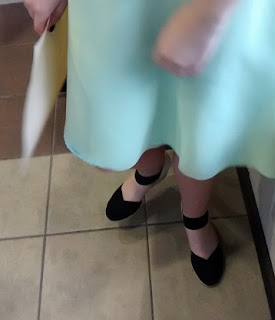 ...although they tell me that's not hard to do.

I'm so proud of her for her accomplishments.

I had a Six Degrees connective experience that played out over the past year.  It went like this...

I have been going to Nancy's Notions Sewing Weekend for more years than I can count but I'm in double digits beginning with 2.

Nancy's most frequent guest on Sewing with Nancy is Mary Mulari.  I first met Mary back when I was the president of the local American Sewing Guild.  We'd just gotten some cash built up in our treasury, and she was our first outside speaker.  I picked her up at the airport and got to know her a little. 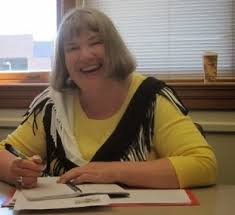 I love Rita Farro's humor, have ever since I saw her at a Nancy Zieman Sewing Weekend years ago when she presented a seminar based on a book she wrote called "Life Is Not A Dress Size"... subtitled how to dress like a million bucks when you feel like Cher but look like Rosanne or something like that.  So when she started writing a blog, I started reading it daily... I NEED MY RITA FIX!!

Go here and read it:  http://ritassewfun.blogspot.com/ -- sometimes funny, sometimes serious, always Rita... I have so often felt that she and I are kindred spirits.  When I respond to her sometimes I would say "this is Sue in the basement in Milwaukee" because at the time I started reading her blog, I was working in a suite of offices in a basement in Milwaukee.  (We've since moved to a second floor suite in Milwaukee, lucky me!)

Rita is friends with Mary Mulari.  They call their partnership the Midwest Ya-Ya Sisters (Have you seen the movie Divine Secrets of the Ya-Ya Sisterhood??  If not go rent it!)

I try to see MWYYS shows whenever I can get to them, although I'm not one of their official stalkers.  Yes, they have those!

Rita often blogs about her granddaughter Lilly, and I have granddaughters, one just a bit older than Lilly.  Rita and I both have a thing about princesses -- it's a culture that needs updating.  The best princesses don't sit around and wait for the handsome prince, they rescue themselves using their own brains and initiative.  Think "Brave" or "Ever After".

Last year I won a Babylock Sewing Machine at MWYYS evening performance at Sewing Weekend!  My name was drawn by none other than Rita Farro's granddaughter Lilly.  When Rita read my name off she said "Hey, is that Sue from Milwaukee??"  Yikes!!  Yes it is!!  We had a lovely chat, Rita and Mary both signed my programs and the pattern I purchased and I felt like the luckiest person in the world that night.

One year I signed up to see Fons and Porter at Nancy's and sat in the front row.  Liz admired my vest, and so did Marianne.  Some conversation lead to a commission for me to sew a similar vest for each of them, and they went back and forth in the mail from Wisconsin to Iowa.

Liz retired and Marianne's daughter Mary joined her on their PBS show Love of Quilting, eventually taking it over.  This year, Mary Fons came to Sewing Weekend and I signed up to attend her seminar on Contrast.  It was AWESOME!!  I so enjoyed it.  Her sense of humor is amazing, she knows her stuff, and is highly entertaining.

Mary blogs too.  Her blog is called Paper Girl.  She's a writer from way back, and I've been reading that daily too.
http://blog.maryfons.com/  Read!  Be enlightened and entertained!﻿

I'm about to connect the dots.

So I'm reading Rita's blog about how she's taking her granddaughter on a trip to Chicago, and she emailed a friend who lives in Chicago for some suggestions on places to go.  She was invited to meet said friend for breakfast or some joint activities, i.e. Tour Guide stuff, you know, my city-let me show you around kind of stuff.

A few days later I'm reading Mary's blog about how a sewing friend contacted her and she's planning a super duper surprise for that friend and her granddaughter when they get to Chicago...

Oh yeah!  When I read that at first it didn't click.  But some days later, suddenly, there on Rita's blog are photos of MARY and on Mary's blog there are photos of LILLY and POW just like that, I can see the connections.  Duh, it should have clicked sooner but I have lots of sewing friends, so why would these ladies not have the same??

I guess my brain was slowing down or something.

So we're all connected I guess, in some way, shape or form.

Oh, and I completely forgot to tell Mary that I have a single son who is very handsome, very nice, recently divorced and I could totally fix them up!

Posted by Sewing Sue at 9:54 AM No comments: