This last five months have flown by... literally and figuratively!  It seems like a few weeks ago I was packing to move and it's almost June.  You know what they say, time flies when you're having fun.  :-)

We moved on January 4, a Friday.  I can't say enough nice things about Two Men and a Truck!  Although they need to change their name to THREE Men and a Truck... those young fellows worked their tails off to take TWO truckloads of things from our old place to the new one.  They were so careful, and so kind about my tons of books and all the boxes marked 'sewing stuff'.  They were extremely nice and went away with a big tip at the end of a long day.  Thank you boys!

My sewing room is coming along.  I won't say nicely, it's slow going.  There are no shelves on the walls like there were in my old house.  Things are still in boxes.  I actually have opened them all so I know what's in them, but there are still a good half dozen at least that haven't been unpacked. 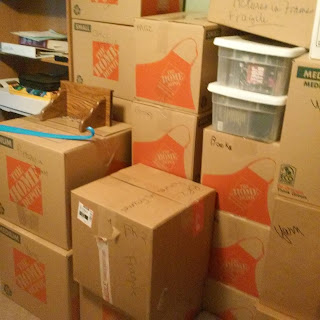 This is part of the mess I had on December 28 of last year.  I'm so happy to report that what I have now is nowhere NEAR that big pile.  Although DH has declared a moratorium on cardboard boxes!

I'm sure the recycling guys in our condo development are happy that they've seen a major reduction in cardboard from my unit!

My daughter and I went to a big book sale at State Fair Park last week.  All the books were from the Half Price Book Store clearance.  There were lots of older books and tables full of kids and young adult fiction, history and crafting books... I never made it back to the fiction section.  We filled a grocery cart with books and neither one of us exceeded $50!  I scored a newer Betty Crocker cookbook and two from Rachel Ray, along with two bagfuls of mystery and fiction, and a coffee table book called the Encyclopedia of Rock and Roll.  Awesome! 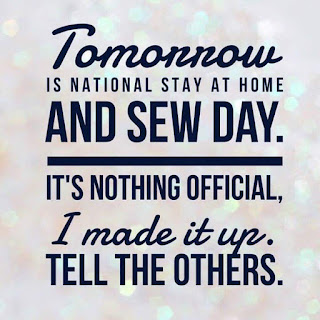