Moving On, or Just Moving?

Today I am going to call a local real estate agent and list my house for sale.  we have been here for 11 years.  We've been happy here for the most part.  It's the only house Miss A has ever lived in, she was mere weeks old when we all moved in.  But it's time.

DD is getting married and moving them all in with her soon to be new husband.  He has a nice little house that will hold them all, and no desire to sell it and move into our rental unit.  An certainly no desire to buy OUR house and have us as tenants!  LOL! 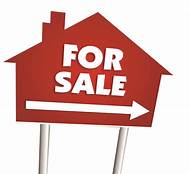 The idea of living somewhere else is fun, exciting even.  I relish the idea of living in a condo or a house on a smaller lot.  I know DH would appreciate not having so much grass to cut, or so much driveway (two, actually) to shovel.

But moving?  UGH big time!  Have you seen my Resource Room lately??  Or for that matter, the garage/shed/basement/spare room??

Dear oh dear oh dear, how did so much STUFF get into my spaces?

The jobs we need to do to get this house ready for an open house boggle the mind.  The big stuff, like installing new patio doors and painting, can probably be hired out.  But things must be sorted.  Things.  Too many things!  All important at some time or other, or they would not be here.  Or so I'm telling myself.

And having a rummage sale?  Oh no.  There just seems like too much work to that.  How big a deduction can I get for donating to Goodwill instead?  I almost wish I could hire those 'got junk' people you see on TV and ask them to make it all disappear with a wink and a point.

But what if it was something I needed?  I guess I could become a hoarder very easily.

I hope the real estate market holds out at a boom for just a little bit longer.

The month of August is going to be fraught with excitement at our house!  Lots of little things happening like DH's birthday coming up and lots of cleaning up along with a few much needed home repairs, but the big deal is going to be a family wedding.

DD has been divorced for about a year, and of course they were split up for quite a while before that actually happened.  Meanwhile she met someone new and now there is to be a wedding!  For a second wedding for both, they're going to a lot of trouble to make it a big occasion, but that is just my humble opinion; which when combined with a dollar may get you a Coke at McDonald's, but not much more.

This week I'm doing dress alterations for the bride and bridesmaids.  The bridal gown is a shade of pink that is called blush, and of course I don't have any thread that color!  White will do for the interior seams but it's got a lace train that will definitely need to match.  I don't recall seeing this color at the quilt shop, so off I go to Joann's...

The two bridesmaids, Miss E and Miss A, have blue dresses.  They're identical in size, but one girl is a teen and the other is a tweenie, so the challenge is to adjust the tweenie dress to a tweenie shape.  The teen fit her dress almost perfectly.  I have to ask though, why do bridal shops think those dresses need so much padding in the front??  I could remove it from all three dresses!
I finished up my four part Sock Toolbox class last week.  That was so much fun, no stress about getting things done in a certain amount of time, just learning various ways to do each of the parts of sock anatomy and finding the one(s) you prefer.  If you want to know about socks, the place to go is Cream City Yarn in Brookfield, WI (no, I don't work there and no one paid me to say that!).  The class was taught by Lindsay, and she knows whereof she speaks! 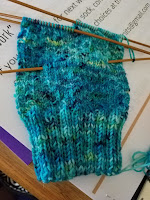 My first sock was Hermoine's Everyday Socks (a free pattern on Ravelry) knit with Twisted Owl fiber and I think the colorway was something about water, but the label is misplaced.  I finished the first one, successfully performed the Kitchener Stitch on the toe graft, thanks to YouTube, and cast on sock number two. 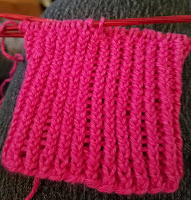 Sock two was pink bamboo and cotton.  I started it on the same sized needles as the first pair but the sock was about an inch wider!  They could have been giant socks!  So I frogged the ribbing and sized down with fewer stitches.  I actually tried twisted rib on them, and it looks nice.  It's kind of fussy to knit since you have to remember to knit in the back loop and purl normally, but I did learn something.  That sock is at the heel turn at present. 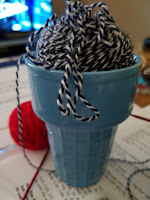 Do you like my yarn holder?  I found this small blue ceramic ice cream cone at the Goodwill for 99 cents.  I was thinking pencil holder, but it turned out to be just the right size for a small cake of this wool sock yarn, with the small ball of alternate color for the heel sitting in the bottom. 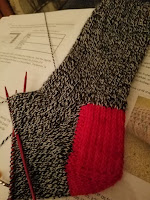 This yarn, having no nylon in its contents, needed a contrast heel to stand up to wearing.  The wool is nice to wear, very soft, but won't stand up to the tugging and rubbing of actual walking, so contrast yarn fixes things right up.  I thought the sock yarn was black and white, but in daylight it looks more like navy, so red was the perfect choice. 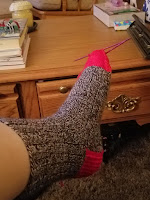 This sock is now finished, although here you're seeing it before the toe graft.  This one was also successfully Kitchener'd.  The second sock has been cast on.

Did you know that in WWI there were jillions of women knitting socks for the troops overseas?  Here is what I found on the blog "loveknitting.com"

Not only did knitted socks play a role in World War I, but conversely, World War I has had a lasting impact on the knitted sock. Until World War I socks typically had seamed toes, and these seams caused great discomfort for soldiers on forced marches and in the wet and muddy trenches, where those seams rubbed the men’s toes raw, which in turn could result in dangerous infections. The British Secretary of State for War, Horatio Herbert Kitchener, associated himself with the Red Cross drive to urge women to knit “comforts” or items for the men in the military, particularly mittens, socks and scarves. He was concerned about the foot problems the sock seams caused and personally contributed a pattern for socks which included a seamless grafting technique that would come to be known as the “Kitchener stitch”.

So thank you, Lord Kitchener, for being so concerned about your troops that you invented the seamless toe graft!

The Princesses are out of bed, so it's time now to move on to project number two for the day, breakfast!