The Princess and The Little Quilt

Once upon a time there was a new baby in the family.  The grandmother made the baby a small quilt.  It was quite lovely, all primary colors and pretty prints interspersed with white blocks. 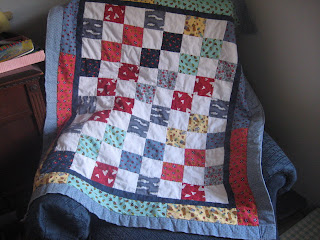 The grandmother found pieces of fleece and covered the big holes.  The patches had worn off on the front, and it was becoming harder and harder to find places to sew more patches.  In some places the poor little quilt consisted only of the backing, and the seams where quilting had been done. 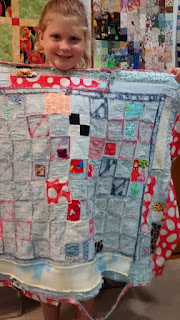 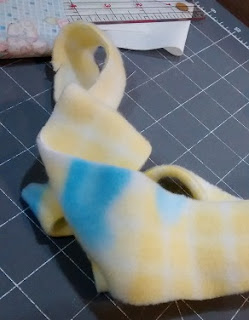 But still, the girl LOVED the little quilt.  You could see it on her face when she supervised the repairs!  "My grandmother can fix ANYTHING" she would say.
"And look, I like this hole.  I can use it to help me carry my little quilt when my hands are full!" she proudly told her grandmother.﻿ 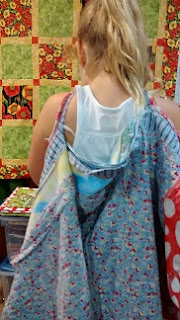 The grandmother thought, thank goodness for little girls who love little quilts.  It makes what I do have meaning.  It's why I sew, for love.

And they all lived happily ever after, since the patches are holding for now.

This was a good sewing weekend... the weather here was nasty on and off, with thunderstorms and rain.  It was a good day to stay in the basement.

I had some grands over on Saturday.  When it was nice we did this: 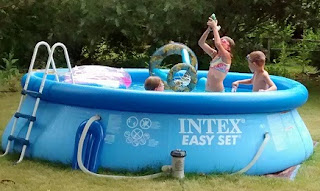 Mermaids and men in the pool.  It was so hot, I had to find a spot in the shade to watch them from, and I was a bit jealous.  But there is no way I'm putting on a bathing suit... just no way!

But the weather took a bad turn in the afternoon, so we came in.  DH is a fanatic about watching the Weather Channel during storm warnings.  Of course this made little people worried!  I said "would you be more comfortable in the basement?"  They said "Yeah, Gramma, your basement is COOL!" - as in awesome.  I keep things downstairs to entertain small people while I'm working on projects.

They pulled out the markers, paper, puzzles, books and scissors and went to town.  They also 'sorted' my button jar for me.  All. Over. The. Place.

I pulled out my 2 1/2 inch strips bin and did some sorting of my own.  I'd seen a pattern I wanted to try to follow for my church quilt group, but of course could not locate it when I wanted it.  But then Sewing with Nancy was on earlier, and she was showing Quick Column Quilts and had done something similar.  So I pulled up my recorded show and off I went.

I had a pile of white strips and a pile of light to medium colored strips, cut mostly width of fabric.  I cut the WOF strips in half so I had approximately 20 inches by 2 1/2 inches.  (The background can be anything but should be consistent... I used white because I had enough of one white-on-white pattern to do what I wanted.)

The next steps were easy.  Sew the short ends of one colored and one white strip together at the cut end. 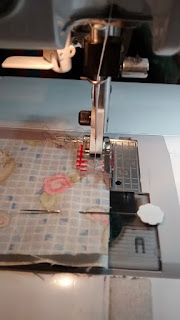 Press to the colored piece, or the 'dark side'. This seam could be pressed open too if you want.  I just pressed to the centers because it was quicker. 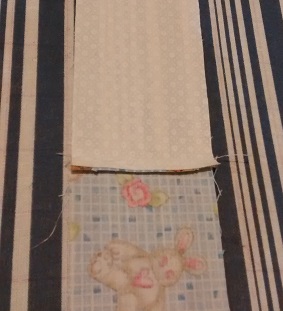 Then meet the other two short ends together, most likely they are both selvedge ends.  Sew them together at whatever point is 1/4 inch from the beginning of the selvedge.  You can see on the top that I am a bit farther in from the top fabric because the bottom white fabric had a wider selvedge.  Sew that seam.  (Note, it doesn't matter whether your two strips are the same length or not.  Things will get evened up at the end of the process.) 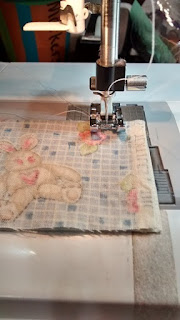 Then trim off the selvedge leaving a 1/4" seam allowance.  More or less... It's not a vital measurement on this quilt.  Just don't cut it too small or leave the selvedges on.  They can shrink and make your top pucker. 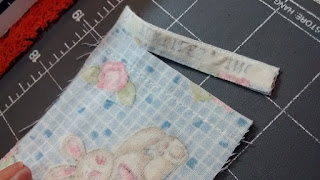 Now you have a fabric 'tube'.  Fold the tube more or less in half, being careful not to align the two seams.  You want them offset.  Either by a little or by more.  The goal will be apparent in a few minutes.﻿

At the fold in the WHITE end, cut the strip apart.  Be careful to cut relatively straight.  DO NOT cut the colored end.  Ask me how I know this...﻿ 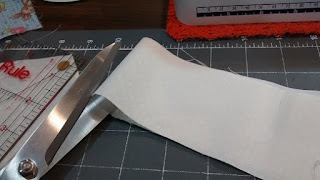 Press the other seam to the dark side.  You end up with a strip that has color in the center and white on both ends.  Sew more of these same strips, varying the amount you offset the seams when you fold.  When you have 24 or 25, start sewing them into sets of two, then sew the twos into fours, etc. 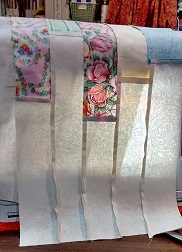 I started all my sets at one end, so at least one side will be fairly even.  The other side will be off by as much as an inch or two and will have to be squared off.  Considering that I was using scraps some of mine were more.  You CAN use smaller sections and even piece your strips, which is what happened in my bunny strip.  That piecing happened because I cut the colored strip apart at almost the same second I realized I should NOT be doing that! 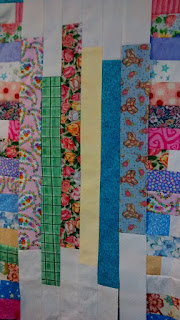 If you're using 2 1/2" strips, 24 of them will result in a baby sized quilt of about 48 inches in finished length if you use the strips horizontally.  When you trim the one uneven edge, that measurement will be anywhere from 36 to 40 inches.  If you want it bigger, you can use longer strips or more strips, depending on which measurement you want bigger.

If you want to see some very cool fancier variations, go to NancyZieman.com and watch the Quick Column Quilts episode 1.  The quilt she did in black and white was stunning!  She has a booklet to accompany the show (of course!) which I am ordering this week.  (I do not work for Nancy's Notions but I have to say it's my dream job... maybe in retirement I can move there and get a job picking up her scraps or something...) 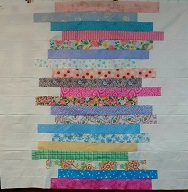 I still have to sew on one more section but here's my work in process.  I decided the background could be any coordinating color, and since the church guild stash is so eclectic, it won't necessarily be solid either.

I brought home a bag of stuff to cut.  My friend Suzi has her own pile to cut.  We both took some bundles home from church to cut kits too.  Yesterday after a short bout of retail therapy with Miss E, I retreated once again and pressed and cut and pressed and cut and this is the result -- this first layer is stuff where the quantity was enough to use for background, since you need at least 12 cuts to make 24 strips:

Those two bunches that are tied are from what was cut off pieced backings. They're so nice and long, in some cases 80 inches or more, I decided they could be bindings. 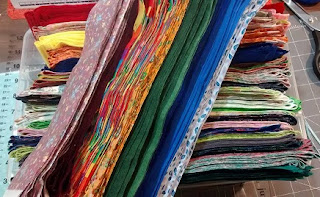 We had some bright stuff, some solids, some crazy ugly pieces.  Some of it was so well aged it was only 36 inches from selvedge to selvedge!  Talk about vintage!  I don't know that this ALL will go into the quilt above, but at least those bits and hunks are now in usable form.

All in all, a good weekend's worth of scrap management... don't you think!