If Wishes Were Horses...

When I was younger, any time I would wish for something out loud, my mother would say "If wishes were horses, then beggars would ride".  That was kind of annoying, firstly because as a small child I wasn't sure what it meant.  Then later when I understood, I realized she was telling me that if you wanted something bad enough there probably was work involved! 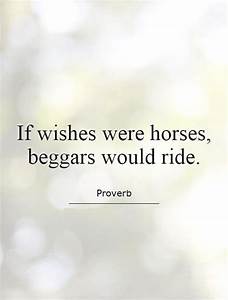 Later she would say "Be careful what you wish for because you might get it".  OK.... and that would be bad because??  LOL!  Leave it to Mom to hand out pithy lessons that you had to work to understand!

I've been wishing for a nice condo somewhere close to things I need to get to but within traveling distance of both of my children's' families, in case we need to do kid pickup or have them over for dinners.  I found the idea of moving both daunting and exciting.  The whole idea of new stuff is great, but the cleaning and sorting and packing, oh my aching back!

Just when I thought there was no truth to the rumors about the hot real estate market, we sold our townhouse.  In one day, on the first day of showings, and for a good price!  Then the panic hit -- OK potentially homeless here!!  Ah, no, on the second day of looking we found a place we liked, within our budget, with no fixups needed...

Now I'm just waiting for appraisers and banks and real estate title companies to do their thing (or things, as the case may be).

Meanwhile, on Friday of last week I had a BIG hole in my house! 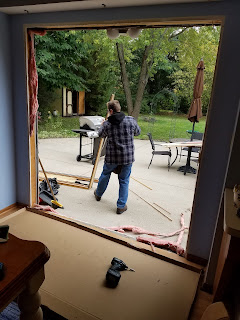 It was 42 degrees outside, and that was the day that the installation of my patio doors was to happen.  They were efficient and fast as they could be but it still took about three hours for the old doors to come out, things to get squared up, and the new doors to be installed.

There were three guys to install two complete doors, one in either unit.  The older guys were dressed warmly but bare-headed, and with no gloves.  The younger guy looked like he was trying not to expose ANY bare skin to the elements, complete with hat, hoodie and gloves. 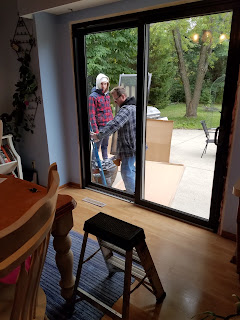 The new doors slide like butter, they lock without the use of a bar in the track, and the glass is clear and the handles all work.  I could not be more pleased.  They're Anderson doors and we bought them at Home Depot.  Yay!!  I'm just sorry we're moving so we won't be able to enjoy them all that long!

Meanwhile, during my sewing hours I'm working on a kit called Jewel Frames.  The pattern is a free download from the internet, but the fabric was purchased as a kit (printed copy of the pattern included.)  It's all Kaffe fabric in shades of my favorite colors.  I can say that because I cut up these kits while I was working at the shop, so I picked them out!  ;-) 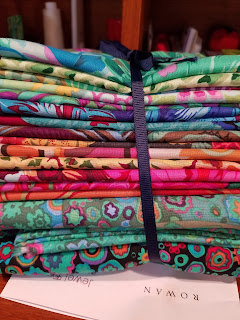 This is the pattern... you can google it if you want to see the details.  Yes, I know the fabric selection in the kit is not exactly the same as the pattern fabric list, but this is an older pattern.  Some of the fabrics are just not available, or we were out of them. 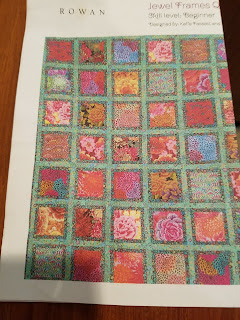 The first round is a black background fabric called Roman Glass, in the color Jewel.  One of my fav's. 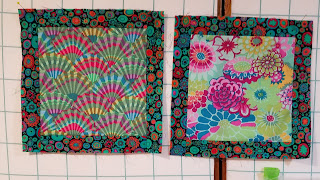 The next round will be Millefiori in green, another favorite.

Here are my blocks, first round half done.

Between cleaning closets and sorting bookshelves, I'm still working on socks.  I was VERY happy to have some to keep my feet warm on Friday!  The downstairs temperature was 42, even with the heat on, but up on the second floor it was 80 because the furnace kept running and running, trying to thaw the main floor.  Ha!  Didn't work until they finished the doors... 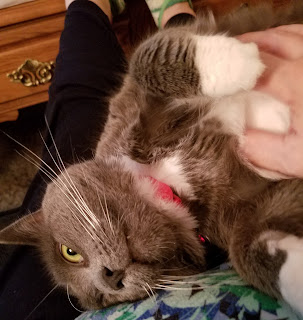 The only things that kept me warm that day were a cat on the lap, new sneaks and a nice pair on hand knitted socks! 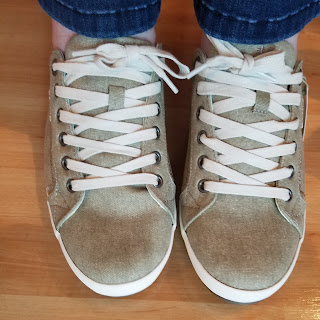 Not necessarily all at the same time... 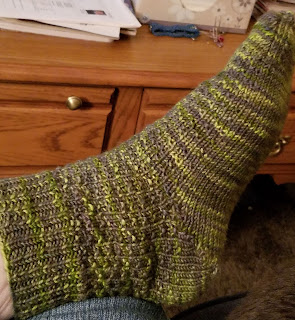